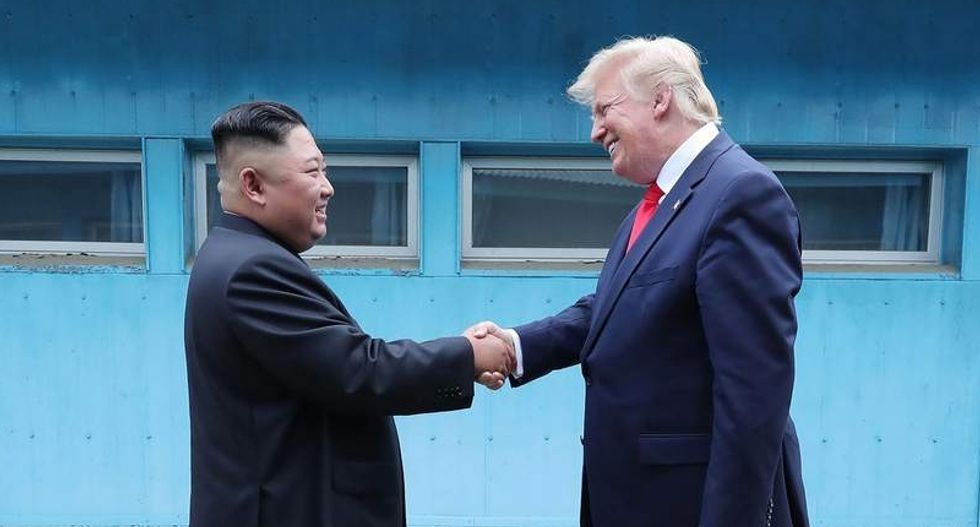 The country's official Korean Central News Agency did not specify the nature of the weapon tested in Saturday's launch.

But a statement from the North Korean foreign ministry called it a "test for developing the conventional weapons".

The missile launches -- Saturday's test was the fifth in two weeks -- are in protest at regular US-South Korean war games already in progress, which have long angered Pyongyang.

Kim "mounted the observation post and guided the test-fire", KCNA said of Saturday's launch, adding that he expressed "great satisfaction" with the result.

Defence officials in Seoul said what appeared to be two short-range ballistic missiles were fired at daybreak Saturday from near the northeastern city of Hamhung, flying 400 kilometres (250 miles) before splashing down in the sea between the Korean peninsula and Japan.

Kim had ordered that the test be carried out "immediately" after getting a report on the development of the new weapon, KCNA said.

"The detailed analysis of the test-fire result proved that the new weapon system's advantageous and powerful demand of the design was perfectly met," it added.

In the foreign ministry statement carried by KCNA, Pyongyang said Seoul had "defiantly staged an aggressive war exercise against us".

Any future talks will be "held strictly between the DPRK and the US, not between the north and the south", it said.

Trump has appeared determined to secure a denuclearisation agreement with North Korea ahead of next year's US presidential elections, despite a breakdown in talks since he first met Kim in a historic summit in Singapore in June 2018.

Even after their abortive second summit in February -- and even as Pyongyang has continued to test short-range missiles -- Trump has been reluctant to criticise the North Korean leader.

On Friday, the Republican president said he agreed with Kim's opposition to the war games -– albeit for financial rather than military reasons -- and indicated the missile launches were not important.

"I'll say it again. There have been no nuclear tests. The missile tests have all been short-range. No ballistic missile tests, no long-range missiles," Trump said.

Then on Saturday, Trump said Kim had expressed willingness to meet and resume negotiations once the US-South Korean exercises are over.

Kim also offered a "small apology for testing the short range missiles," the US leader noted, and said the tests would end once the military drills wrap up on August 20.

Trump said he looks "forward to seeing Kim Jong Un in the not too distant future!"

The pair last met in late June for brief talks in the Demilitarised Zone separating the two Koreas -- and Trump became the first sitting US president ever to step inside the North.

The North Korean foreign ministry said Trump's comment "in effect recognizes the self-defensive rights of a sovereign state, saying that it is a small missile test which a lot of countries do."

It added that any contact with Seoul would be difficult going forward unless the military exercises stop or a "plausible excuse" is given.

Washington and Seoul pledged in March to scale down their joint drills in an effort to foster denuclearisation efforts.

While past exercises involved extensive combat field training -- with thousands of American troops coming in from several countries to take part -- the current games are decidedly low-key, with the emphasis on computer-simulated scenarios.