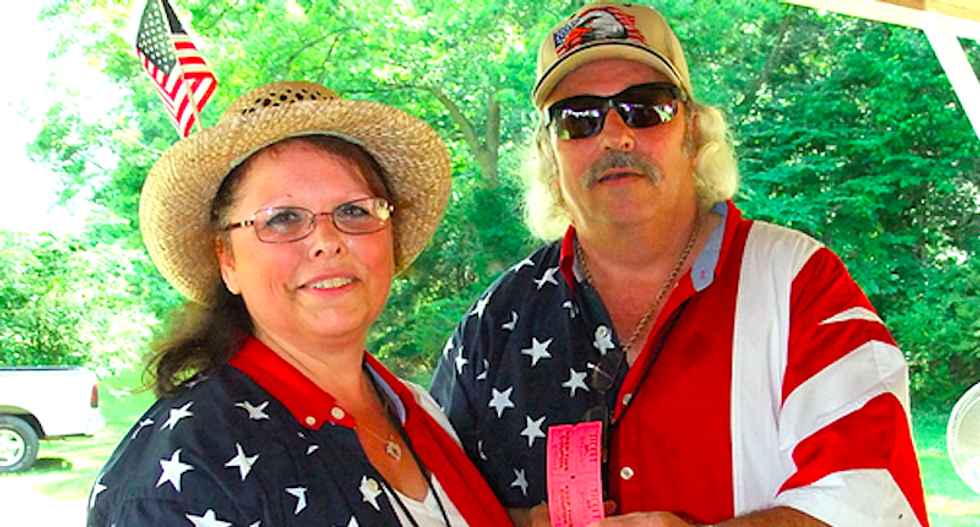 A retrospective examination of the Tea Party movement published by the New York Times overlooks two of the key elements of the supposedly grassroots conservative movement.

Times reporter Jeremy Peters accepts at face value that Americans concerned about runaway deficits and government spending to keep the economy from plunging further into recession, but fails to reckon with the racism against President Barack Obama that animated the movement -- which was created and funded by corporate billionaires like the Koch brothers.

The Tea Party grew out of the anti-tax movement of the early 1980s, when tobacco companies poured money into third-party groups to fight excise taxes on cigarettes, and to undermine research linking secondhand smoke to cancer, according to an academic study funded by the National Cancer Institute of the National Institute of Health.

The study traces the roots of the movement to the Citizens for a Sound Economy organization -- founded by Charles and David Koch in 1984, with backing from Philip Morris and other tobacco companies.

The Kochs and CSE set up the first Tea Party Movement website in 2002, and their anti-tax organization eventually splintered into Americans for Prosperity and Freedomworks -- which funded and organized many of the supposedly grassroots movement's events.

But the anti-tax movement gained new momentum seven years later, in the depths of a recession that began at the end of President George W. Bush's second term, after a viral rant by CNBC host Rick Santelli.

“This is America!” Santelli shouted from the floor of the Chicago Mercantile Exchange on Feb. 19, 2009. “How many of you people want to pay for your neighbor’s mortgage that has an extra bathroom and can’t pay their bills?”

The traders erupted in boos, and Santelli helped fold economic anxiety into the festering racist resentment against Obama, who was inaugurated a month earlier as the nation's first black president.

“President Obama, are you listening?” Santelli bellowed. “We’re thinking of having a Chicago Tea Party in July. All you capitalists show up to Lake Michigan, I’m going to start organizing.”

Racism, which goes completely unmentioned in the Times retrospective, was always at the core of the Tea Party movement.

Several studies, including one published in Race and Social Problems, found Tea Party supporters were more likely to be racist than other white Americans.

That study found those who viewed the Tea Party favorably more often agreed with negative views about African-Americans and less likely to believe slavery or institutional racism had hurt black people.

Self-identified Tea Party members didn't necessarily share those beliefs at higher rates than other white Americans -- but they were significantly more likely to believe Obama was a Muslim, and they tended to favor harsher immigration control and believe whiteness was very important in being "fully American."

Trump has exploded the deficit to $1 trillion, but Republicans -- including his acting chief of staff Mick Mulvaney, who was swept into Congress as part of the 2010 Tea Party wave -- don't seem to care.

Poll after poll shows Trump enjoying broad support from Republicans -- usually above 80 percent, although he claims 94 percent -- which undermines the premise of the Times' article.

"The Tea Party didn’t get what it wanted," the paper titled Peters' piece, "but it did unleash the politics of anger."

The GOP under Trump has fully embraced the racist and corporatist soul that animated the Tea Party -- which has gotten everything it wanted, and an angry leader.