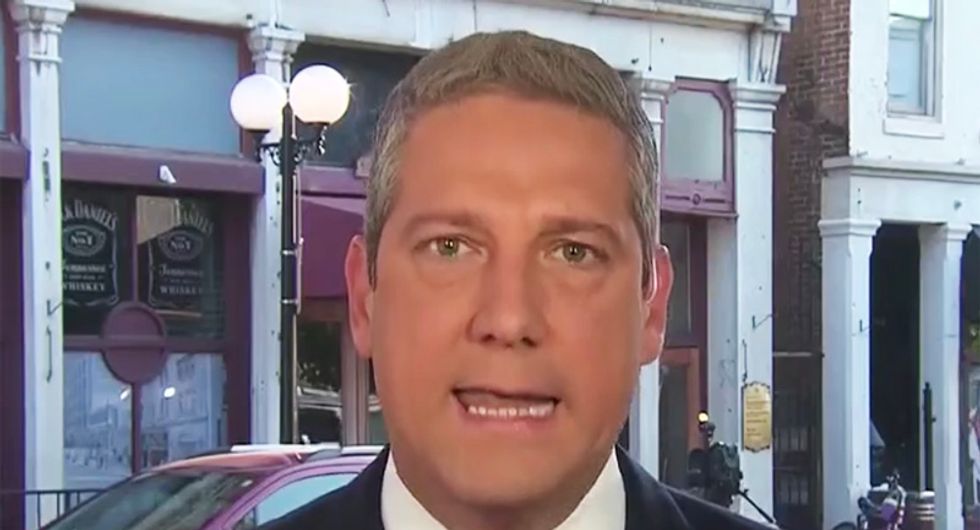 During an appearance on CNN on Monday morning, Tim Ryan-- a Democratic presidential candidate and Ohio congressman -- blew up on the president after he tweeted that he wanted to link sensible gun reform to proposed new immigration laws.

Speaking from Dayton -- the scene of a mass shooting early Sunday -- Ryan was asked about the president's proposal and proceeded to batter Trump while blaming him for two assault-weapon related slaughters over the weekend.

"That's a joke, that's an absolute freaking joke," he exclaimed. "That he's going to tie this to the most polarized issue happening in the United States around immigration reform? This is very clear-cut here; there are people that are getting access to guns that shouldn't be, and the guns are high-powered, the magazines hold too many bullets. And they are coming to places like Dayton and El Paso, Walmarts, entertainment districts, churches like Mother Emanuel AME in South Carolina and they are killing American citizens."

"[Senate Majority Leader] Mitch McConnell (R-KY) needs to get off his ass and do something," he continued. "People are getting killed in the streets in America and nobody is acting -- nobody. There's a bottleneck in the United States Senate. The House sent a comprehensive background check bill that is supported by 90 percent of the American people. What the hell are we doing in the United States of America?"

"I'm telling you, people are fed up," he raged. "We were here in Dayton last night and there were tears and rage. People in Washington, D.C., and state capitals need to get their act together and pass some legislation that 80 to 90 percent of the American people support."