‘One of the worst case scenarios you can possibly have’: Meteorologist scared of Hurricane Dorian update 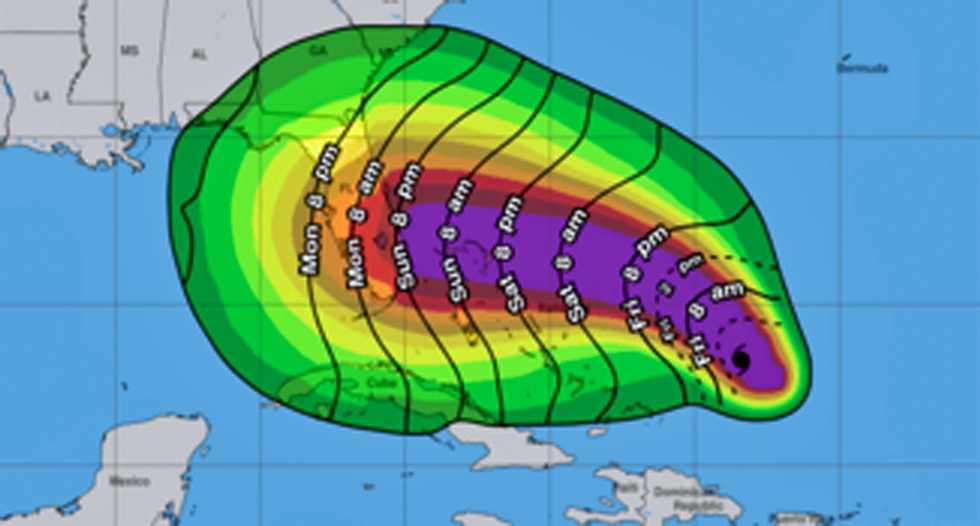 Hurricane Dorian cone of uncertainty from the National Hurricane Center

The National Hurricane Center's 11 p.m. Eastern update on Hurricane Dorian presents a harrowing warning for the state of Florida.

The advisory said that Dorian is now a Category 2 storm and is on pace to become a Category 4 before striking Florida on Monday.

"Florida's governor has expanded a state of emergency to include his entire state. Hurricane Dorian is expected to make landfall there by Monday, possibly as a powerful category 4 storm. Officials are warning residents up and down the state’s eastern coast to get ready," MSNBC's Steve Kornacki reported on "The 11th Hour" on Thursday.

"What is the very latest?" Kornacki asked.

"The very latest? I’m going try to put a positive spin on it, because right now, three or four days from a landfall, direct impact, the hurricane forecast I just read and just got done briefed on, is about the worst-case possible scenario," Karins explained.

"Why is that good news? I’m glad it’s not tomorrow. Then it would be as dire as it could possibly be. I'm hoping this is going to change in the next three to four days," he said.

"Hopefully it gets better. Is there a scenario where it could get worse?" Kornacki lost.

"The only thing that would get worse is if it got to a Category 5," Karins replied. "But if it got to a cat 5, would it surprise me or anyone else? No."

"So as I am earlier, the 11:00 update was one of the worst scenarios you could possibly have anywhere in the world for a hurricane landfall," he warned.

"You know, we’re about 24 -- about 48 hours away from a huge mass evacuation order if this forecast holds true," Karins added.