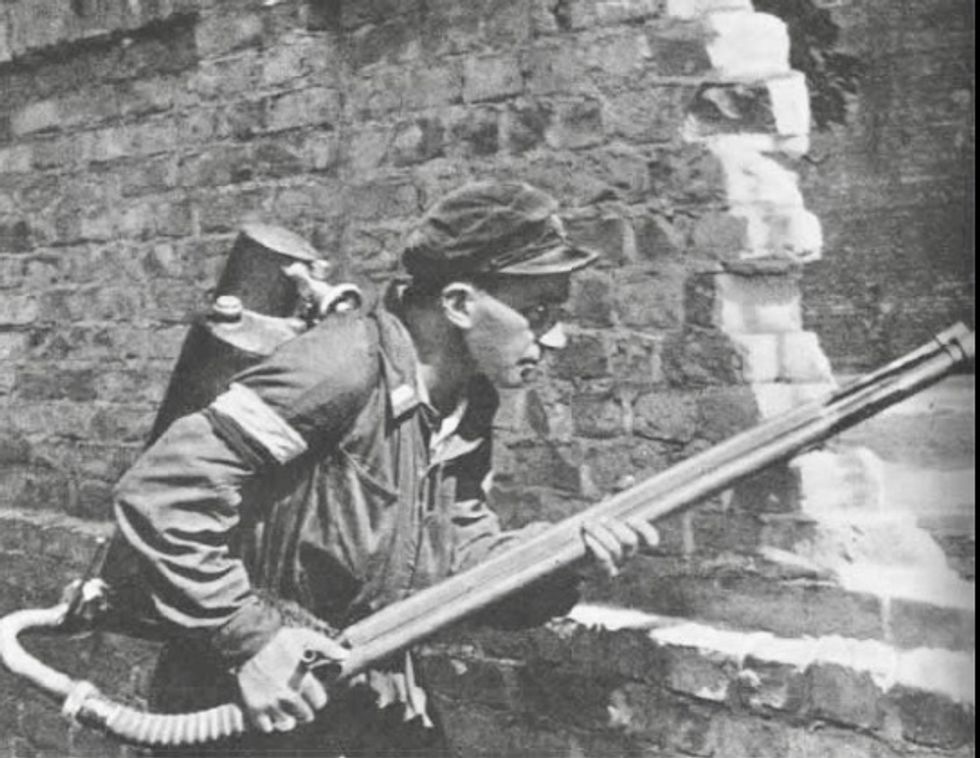 Polish Resistance Fighter with a Flamethrower

Eighty years after the first Nazi bombs fell on Poland, echoes of the blasts can be heard in the bickering between Warsaw and Berlin over the possibility of billions of euros in war reparations.

It was only recently that the neighbors, allies within NATO and the European Union, had appeared to have turned the page on World War II.

But that changed with the 2015 election of Poland's Law and Justice (PiS) party, which sees wariness of the EU and Germany as a useful political tool. And the right-wing party has reopened discussion on reparations.

"Poland has yet to receive proper compensation from Germany... We lost six million people over the course of the war -- many more than did countries that received major reparations," Polish Prime Minister Mateusz Morawiecki said earlier this month.

"It's not fair. This can't continue."

PiS leader Jaroslaw Kaczynski relaunched the issue in 2017, and since then, a parliamentary commission has been working on a new analysis of the extent of Poland's wartime human and material losses.

The figures could be even higher than those drawn up by Poland in 1947, which are equivalent to around $850 billion (750 billion euros) today, according to the commission head, PiS lawmaker Arkadiusz Mularczyk.

"It's been so many years since the war ended and Germany hasn't reflected on its past. It's more concerned with the stability of its budget than with observing the democratic guidelines of the rule of law and respecting human rights," Mularczyk told AFP.

He claims "discrimination," saying Germany provides compensation to other war victims while there are still Poles alive "who experienced the same suffering as the Jewish nation."

Berlin has accepted responsibility for Nazi war atrocities but routinely rejects demands for reparations, be they from Poland or Greece.

According to Berlin, Poland, then a Soviet satellite, relinquished its claims for reparations to the former communist east Germany -- the German Democratic Republic -- in 1953.

In 1990, Poland and a united Germany signed a border agreement after the Two Plus Four conference on the reunification of Germany, followed by a good neighbor agreement in 1991. The question of reparations was never raised, leading Berlin to assume a tacit agreement that the matter had been settled.

But Polish conservatives contest the validity of the 1953 accord, claiming Warsaw acted under pressure from the Soviet Union.

They also focus on insisting that Germany has a "moral duty" in the matter, perhaps trying to avoid it ending up as a thorny legal dispute.

Poles themselves are divided on the question of reparations.

For Tadeusz Sierandt, who was a child when the Nazis bombed his hometown of Wielun, the matter has been settled since the Allies redrew Poland's borders at the war's end.

At the time Poland lost almost half of its eastern territory to the Soviet Union but it also gained a smaller chunk of land to its west that had belonged to Germany.

But for historian Tadeusz Olejnik, the current call for reparations remains "morally justified".

However, there is consensus among Germans that reparations are a closed case.

But at the same time among the country's rising political far-right -- especially present in areas bordering Poland -- there is talk of rehabilitating the Wehrmacht.

Ahead of the 2017 general election, the co-leader of the far-right party Alternative for Germany (AfD), Alexander Gauland, said Germans "have the right to be proud of the achievements of German soldiers in two world wars."

The comments triggered outrage from German politicians of all stripes, but the criticism did not stop the AfD from becoming the country's first nationalist party to win dozens of seats in parliament since World War II.

Poland has not yet made a formal demand for reparations, but PiS lawmaker Mularczyk stressed that the issue must be addressed.

"With the issue (of reparations) left unsettled, we reach the point of relativising the role played by the Germans during World War II," he said.

Two weeks after Germany invaded Poland from the west in 1939, the Soviet Union invaded from the east.

But "the Polish side is not raising the issue of war reparations with Russia right now," Poland's foreign ministry told AFP, without elaborating.