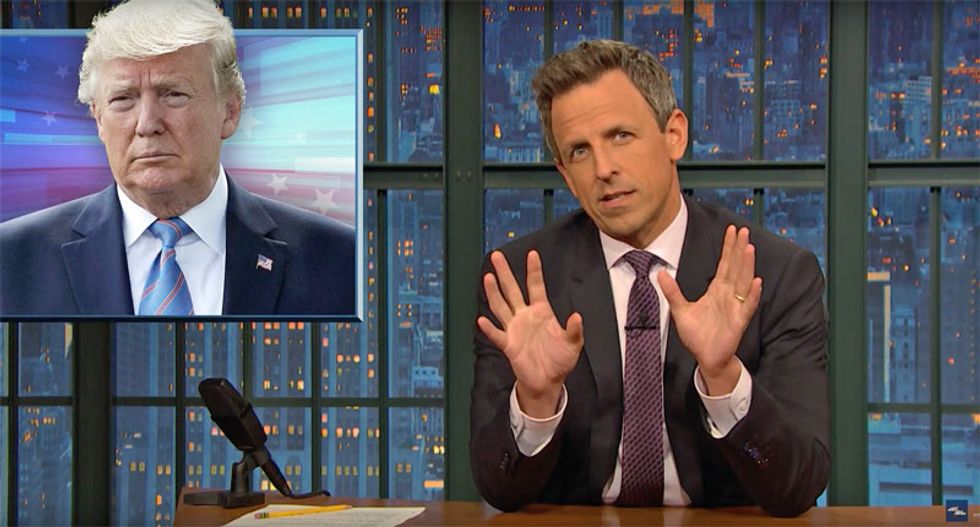 Seth Meyers took a closer look at the "Conspiracy-Theorist-in-Chief."

"Well, it was another super-chill weekend -- with the president of the United States retweeting a deranged conspiracy theory accusing a previous president of murder," he reported.

The tweet suggested former President Bill Clinton was responsible for the death of Jeffrey Epstein.

"Trump has paranoid fantasies about everything from climate change to government surveillance to the food he eats," he noted. "According to the book Fire and Fury, 'He had a longtime fear of being poisoned, one reason why he liked to eat at McDonald's -- nobody knew he was coming and the food was safely premade.'"

"It really hammers home how anti-science our president is that he eats fast food to avoid being poisoned," he added.

In Meyer's estimation, this represents a larger less about the politics in America.

"By the way, the same weekend Trump retweeted his deranged Epstein theory, he was in the Hamptons for a series of fundraisers where tickets ran as high as $250,000 -- which sums up so much of our politics right now: a paranoid president spreading unhinged racist conspiracies while raking in millions from a crowd of mega-rich supporters who don't care as long as they can line their own pockets," Meyers explained.

It appears that the January 6th commission is getting ready to rumble. The bipartisan probe in the House of Representatives has been taking the testimony of various participants and observers of the events leading up to the insurrection and has issued 19 subpoenas for some who have so far refused invitations to appear.

The most recent recipient is Jeffrey Clark, the former acting assistant attorney general for the Civil Division of the Justice Department who reportedly broke agency rules by working directly with the president and outside lawyers on a plot to overturn the election. Often portrayed as a lowly background player with no profile, according to the New Republic, Clark is actually a high-level conservative movement legal activist with an Ivy League pedigree, a clerkship with a very right-wing judge, a long association with The Federalist Society as well as Kirkland and Ellis, the law firm known for housing right-wing attorneys in between service in GOP administrations. Clark served on the Romney campaign in 2012 as an "energy adviser" and along with his duties in the civil division, he worked as the assistant attorney general for the Environment and Natural Resources Division, where Bloomberg reports he diligently worked to slash and burn existing environmental policy. In other words, he is a full-fledged creature of the Republican establishment. Attempts to portray him as some sort of eccentric gadfly are wrong. Clark is a member of the club.