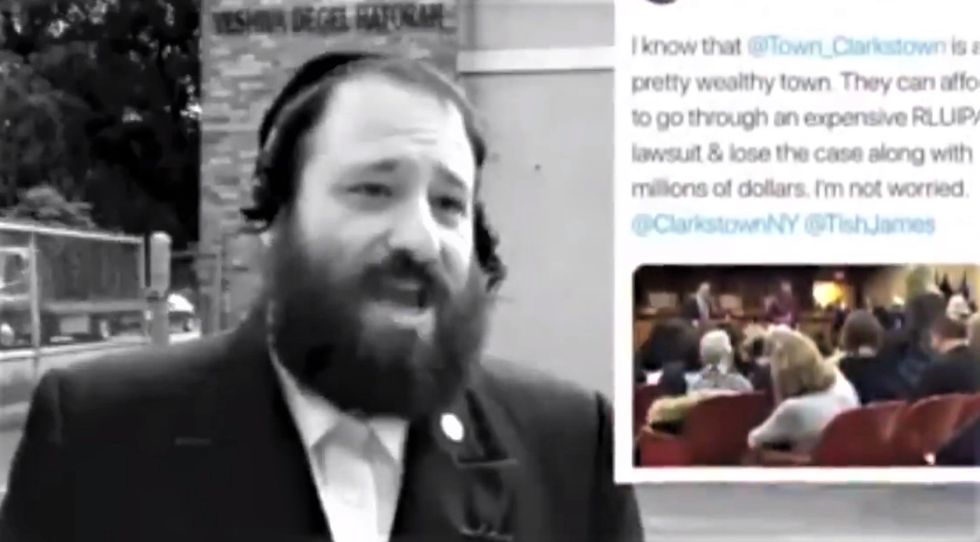 The Rockland County Republican Party has drawn fire for posting -- and subsequently deleting -- an anti-Semitic video that warned about Hasidic Jews replacing "our families."

The Forward reports that the video was produced to rally opposition to a new housing developments that the Rockland County GOP says are part of a "takeover" being engineered by Rockland County Legislator Aron Wieder, an Orthodox Jew.

The video features ominous music along with video footage of Wieder, and also warns that if his purported "takeover" of the county succeeds then "our homes, our families, our schools, our communities, our water, our way of life" will be "at stake."

The video finishes by warning that if local Hasidic Jews win, then "we lose."

The Republican Jewish Coalition swiftly condemned the video, which is said was blatantly anti-Semitic.

"This video is absolutely despicable," the organization said. "It is pure anti-Semitism, and should be immediately taken down. The Rockland County Republican Party is an embarrassment and has no place associating itself with our party."

Rockland County Republican Party chair Lawrence Garvey initially defended the party's decision to post the video, but it has since been taken down from the party's Facebook page.

Watch the original video below.

Anti-Semitism isn’t just Jews getting punched in the face. It’s videos like this, that paint religious Jews as the… https://t.co/a6cWAVk8ZS
— Councilman Deutsch (@Councilman Deutsch) 1567044832.0