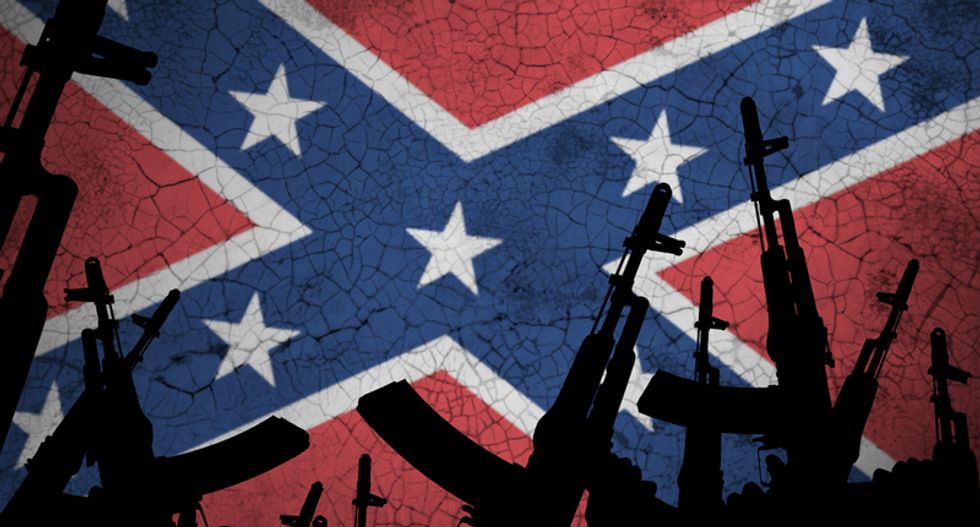 After the El Paso massacre, the idea that white nationalist terrorism is a threat to U.S. national security is the new normal. Even President Trump felt obliged to mouth a bromide about white supremacy.

Outside of Trumpland, a new sort of consensus is taking hold. Bernie Sanders calls for “redirecting federal resources to address this threat to our national security.” So do six former directors of counterterrorism at the National Security Council who served under Presidents Clinton, Bush, Obama and Trump.

“[We] need to enhance efforts to address what is often called ‘domestic terrorism,’ meaning terrorism on U.S. soil not linked to international groups such as ISIS or al-Qaeda,” said the statement of NSC veterans. “[I]t has become abundantly clear over many months now that more must be done to address acts of violence driven by extremist views of all types, including acts of domestic terrorism. We call on our government to make addressing this form of terrorism as high a priority as countering international terrorism has become since 9/11.”

When the national security establishment speaks the same language as the Vermont socialist, things are changing. But no small part of the reason that resources have not been redirected and more has not been done is because of blinders imposed by the very idea of “national security” and its post-9/11 cousin “homeland security.” These terms—and the nationalistic and racial concepts baked into them—have served to define the problem of white terrorism out of existence. With the FBI now saying that “a majority of domestic terrorism cases” under investigation “are motivated by white supremacy,” the problem is too bloody to ignore.

“America is under attack,” said South Bend Mayor Pete Buttigieg. “I’m not sure if this is fully understood. America is under attack by lethal, violent, white nationalist terrorism. And if we’re serious about confronting it, that means we have to have a different conversation... This is a national security emergency.”

That “different conversation” begins with unpacking the concept of “national security.” The term entered the American vocabulary in July 1947 with the passage of the National Security Act. The law created the Defense Department, the National Security Council, and the CIA, as well as the secrecy system that still insulates the secret agencies from the voters and Congress. “National security” justified the creation of a fourth branch of government endowed with the mission of protecting America from the alien ideology of a nuclear-armed foe.

This ideology animated American power until the dissolution of the Soviet Union 44 years later. Any communist party anywhere—and any political force with communist allies—was defined as a danger to Americans. So “national security” justified expeditionary wars (from Korea to Vietnam), interference in democratic elections (from Italy in 1948 to Honduras in 2009) and the massacre of democratic movements that included communist partners (from Indonesia in 1965 to El Salvador in the 1980s).

The violence of white supremacists directed against Americans was a different—and lesser—danger. As America fought the Cold War, violence against the civil rights movement was not considered a national security threat because it was an indigenous American phenomenon, widely supported by white people, at least in the South.

When Oklahoma City bomber Timothy McVeigh killed 168 people in 1995, Newt Gingrich had just been elected Speaker of the House on the strength of his boast to Republican colleagues that he was “a bomb-thrower” who could thwart the menace of Washington embodied by Bill and Hillary Clinton. Because McVeigh’s nationalist ideology was homegrown, the bomb he detonated was not felt as an existential threat. Under the reign of “national security,” white terrorism did not belong in the same threat category as communism.

The notion persisted long after Jim Crow and communism were gone. After 9/11, the USA Patriot Act updated and expanded the doctrine of national security with the notion of “homeland security.” America mobilized to protect its territory from another alien ideology—radical Islam. The imperative of repelling the jihadist threat was used to justify expeditionary wars (and massacres) in Afghanistan and Iraq and drone wars in Pakistan and Somalia, as well as torture and mass surveillance regimes. The notion that a white American might pose a comparable threat was dismissed as inconceivable.

Now the data don’t lie. You’re much more likely to be killed by a white nationalist terrorist than by a jihadist (much less an Iranian). The post-El Paso conversation about how to make America safe begins with identifying the racialized thinking built into national security policy.

“Dear white national security practitioners and colleagues,” tweeted Naveed Jamali, a former naval intelligence officer, “Many of you have spent the last decade looking for terrorists in MY community. Will you do the same for yours?” National security professionals are falling over themselves to say yes. Former NSC staffer Sam Vinograd says, “Fighting white nationalist terrorism will require sustained strategy, resources, and leadership.”

It will also require realism about the malign influence of endless wars on American democracy. To four generations of white Americans imbued with the norms of “national security” and “homeland security,” a foreign threat is inherently more dangerous and illegitimate than a domestic threat. The suddenly fashionable notion that white nationalist terrorism is a threat on par with communism or jihadism is sure to strike some white Americans as an alien ideology. It certainly diverges from the concepts that have guided American thinking about national and security for the past 72 years.

Trump’s lip service notwithstanding, there is no reason to think Washington rhetoric about white supremacy reflects anything like a national consensus. Indeed, by explicitly targeting (some) white people and their “patriotic” feelings, any government campaign against armed white nationalism is sure to be depicted as an un-American cause that must be resisted, like communism and jihadism, with armed action. Only a new vision of American security can protect us.