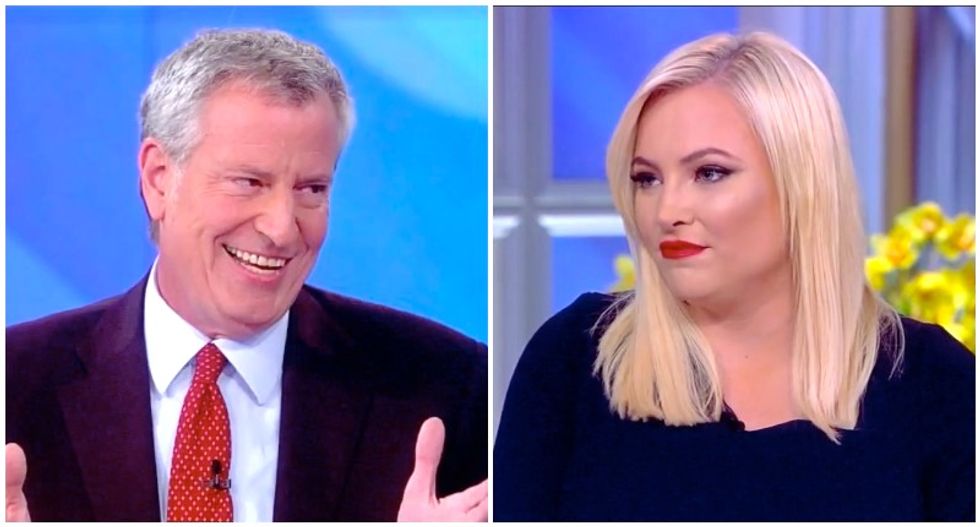 New York City mayor Bill de Blasio gently schooled Meghan McCain after she got in his face for campaigning for president in Iowa as a blackout hit parts of Manhattan.

The Democratic presidential candidate appeared Friday on "The View," and the conservative McCain questioned his out-of-state travel July 13 -- when an operational failure plunged portions of the city into darkness for about five hours.

"You were heavily criticized for campaigning in Iowa during the blackout in New York City," McCain said. "That blackout impacted where I live, it impacted the service people who work there and had to stay up to 4:00 in the morning getting the air conditioners back on, and a group of New Yorkers took out a series of billboards in Iowa reminding you that New Yorkers need your attention."

"How will ignoring your city in the middle of a historical blackout to campaign to basically no one in Iowa change that?" she added.

De Blasio reminded her that he arrived in Iowa before the blackout hit by surprise back home.

"Meghan, listen, respectfully, as the first blackout in 13 years," he said, "it's not something we were ever was told was coming, obviously. I was in Iowa at a series of events, and late on a Saturday night suddenly we're dealing with a blackout. I immediately got on the phone to my team and made sure everyone was in the right position. Our first responders did an amazing job. It went on for five hours, and thank god, not a single person got injured. In fact, it proved just how prepared New York City is for these things."

"Respectfully," de Blasio added, as the audience laughed, "the way you made it sound it was like it was a scheduled blackout and I decided to go someplace else. That's not how it happens."