‘There’s nothing I’m giving up’: Sean Spicer works for pro-Trump PAC and will not curtail his duties while on DWTS 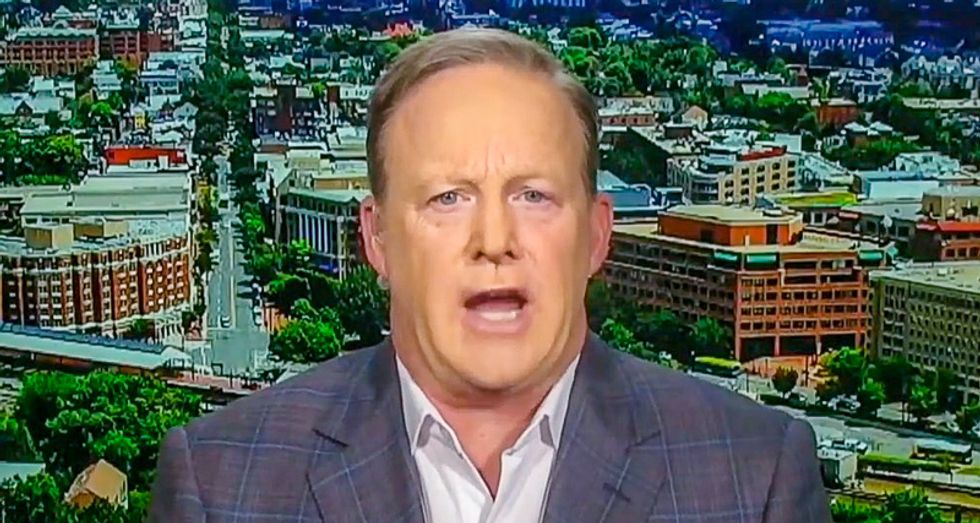 Former Trump press secretary Sean Spicer will be a “star” on ABC’s Dancing With the Stars this season – much to the chagrin of many who expressed outrage this week – but what the announcement on “Good Morning America” didn’t mention is Spicer isn’t giving up his day job – not for a minute.

He will continue to perform his function as the face of both companies, and as he told The Hollywood Reporter he’s not giving up anything.

“There’s nothing I’m stopping or giving up,” Spicer said, noting that ABC is “well aware of my job and what my companies do.”

THR notes Spicer “says he’s not restricted from political activity during his time on Dancing With the Stars.”

Spicer says, “I hope it will be a politics-free zone.”

The new season starts in mid-September, which puts Spicer in the unique position of being able to fundraise and advocate in support of re-electing Trump while his mere presence on TV – he is remembered as the face of the Trump administration – will effectively be a free “plug” for the Trump campaign.

Former school teacher Chasten Buttigieg is slamming Florida legislation dubbed the "Don't Say Gay" bill, which would ban discussion of LGBTQ issues in public schools under the guise of "parental rights," saying it will "kill kids."

Appearing on CNN Buttigieg asked, "what kind of country we're building, or in Florida, what kind of state are you building where you're essentially pushing kids back into the closet, you're saying we can't talk about you? We can't even talk about your families."

For Allyssa Findorff, the decision to hit the road on short-term nursing contracts was an easy one: she'd always wanted to see the rest of America, and the attractive rates on offer helped seal the deal.

A year into the pandemic, with what she felt was enough experience in the ER under her belt, the 32-year-old, her restaurant server boyfriend and their two dogs left their native Wisconsin for her hospital assignments in Florida, followed by Colorado and now Arizona.

An Indigenous community in Canada has identified nearly 100 "potential" graves at a residential school site, months after the discovery of hundreds of children's remains at former boarding schools rocked the country.