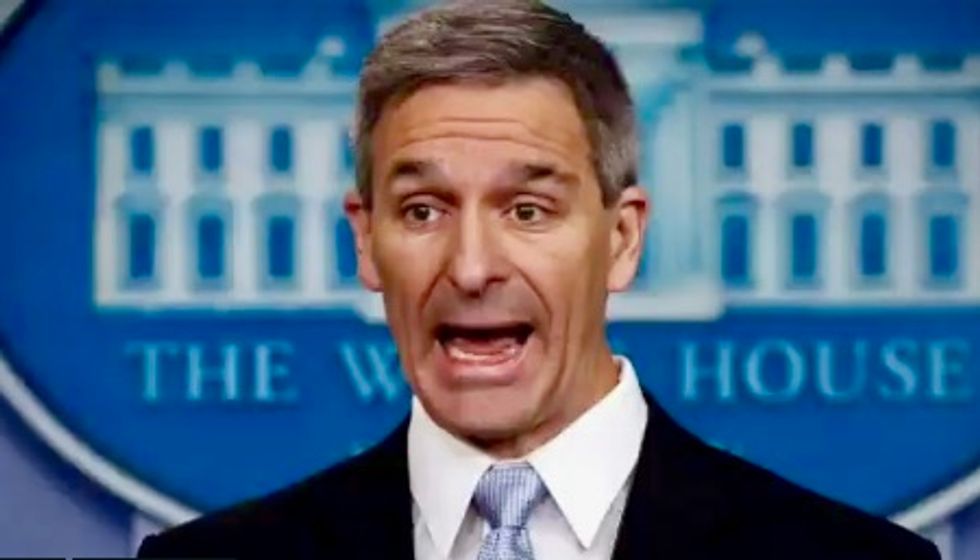 "Cuccinelli may as well have this engraved on a plaque, hang it around his neck, and wear it for the rest of his life," said the director of the ACLU's immigrant rights project

Acting Director of U.S. Citizenship and Immigration Services Ken Cuccinelli is under fresh fire on Tuesday after telling NPR in an interview that the famous words engraved on the U.S. Statue of Liberty—based on the poem by Emma Lazarus—should be re-cast with a qualifier when it comes to the kinds of people arriving at the nation's shores seeking refuge or welcome.

"Give me your tired and your poor who can stand on their own two feet and who will not become a public charge," Cuccinelli responded after being asked by NPR's "Morning Edition" host Rachel Martin if the Lazarus poem, titled "The New Colossus," remains part of the American ethos under the Trump administration

His appearance on NPR came a day after Cuccunelli announced the administration was proposing new immigration rules that would require prospective green card applicants to show evidence that they would not likely require government assistance at  any point in the future if they were granted foreign worker or permanent residency status.

"Cuccinelli may as well have this engraved on a plaque, hang it around his neck, and wear it for the rest of his life," tweeted Omar Jadwat, director of the ACLU's Immigrants' Rights Project.

This is absurd, historically inaccurate, ableist, and shockingly devoid of humanity and compassion. Someone get thi… https://t.co/4I3hhx3eAc
— Sofi Hersher (@Sofi Hersher)1565703498.0

According to CBS News, the long-anticipated policy "would require caseworkers to consider the use of government housing, food, and medical assistance such as the widely-used Section 8 housing vouchers, the Supplemental Nutrition Assistance Program (SNAP), and Medicare's Part D prescription drug coverage" when examining permanent residency applications.

Per NPR on Tuesday:

Welfare benefits will be just one factor that immigration service officers use to determine an applicant's fate in the United States, in addition to age, health, education and financial status.

"If they don't have future prospects of being legal permanent residents without welfare, that will be counted against them," Cuccinelli said.

"All immigrants who can stand on their own two feet, self-sufficient, pull themselves up by their bootstraps," would be welcome, he added.

As Common Dreams reporting noted Monday, immigrant rights groups that denounced the plan when it was first unveiled in September raised fresh alarm and vowed to take legal action against the Trump administration to stop the rule, which is now set to take effect in 62 days.