Trump aide Cuccinelli snaps after CNN's Camerota shows him pictures of caged kids: 'I'm not going to take that' 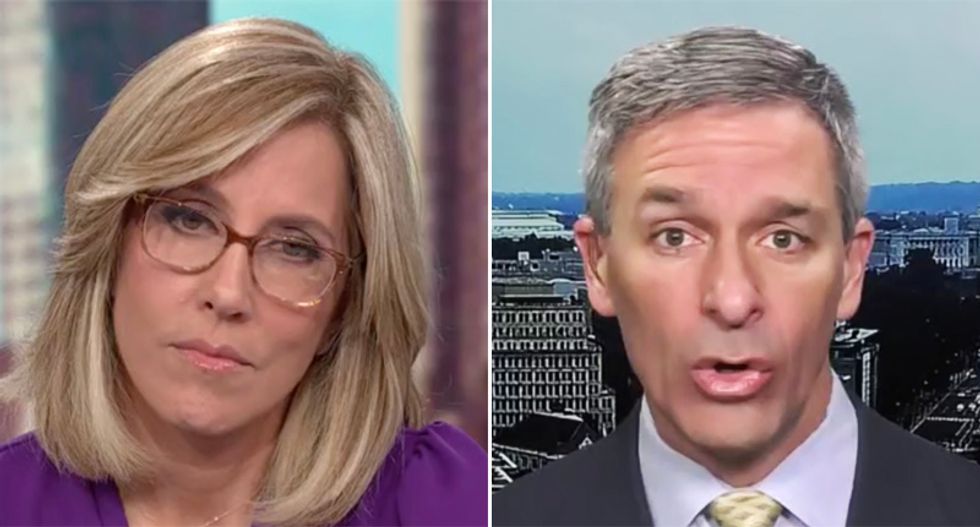 A CNN interview with acting Director of the Citizenship and Immigration Services Ken Cuccinelli took a contentious turn on Friday morning after host Alisyn Camerota showed him pictures of immigrant children being held in cages and asked him why he would want to hold them even longer based upon a recent policy change he instituted.

As the CNN host pressed the Trump administration official on plans to hold children indefinitely, she put pictures of the kids in cages up on the screen which angered Cuccinelli.

"On one level it protects children, but it also exposes children to the overcrowding. Here's some of the roll we've been playing for months," she began, only to have the White House official cut her off.

"I want to be able to ask you a question!" she persisted.

"I'm not going to sit back and take that. I can't see the pictures you're showing," he insisted.

"I guarantee you they're border agents," Camerota responded.

"Border patrol -- are those Border Patrol facilities?" he asked.

"Yes, these are Border Patrol facilities with overcrowding and not enough room for people inside these cages" Camerota pressed. "And now children will be held there indefinitely."

"So we don't use cages. We use the facilities built in the 1990s and with the last administration, so if you want to characterize it that way, everyone watching should know you're pushing a narrative," he replied.

"You're calling it a different word," the exasperated Camerota replied. "Here -- let's agree on this. Through chain link fencing, there are families being held in facilities that are overcrowded. I'm getting this from you. It's your administration that has said that the overcrowding has gotten to a level that is unlivable."