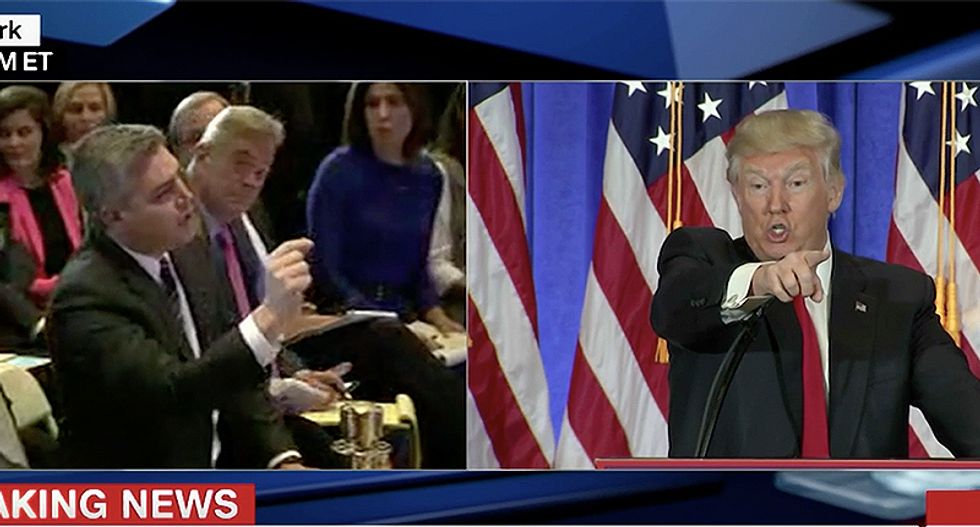 President Donald Trump's war against the media has taken a next step. According to The New York Times, Trump's allies have been compiling information on reporters at CNN, The Washington Post and The New York Times to strike back because the president believes they "aggressively investigated" him.

The information was revealed Sunday using information disclosed by associates of conservative Arthur Schwartz, who is spearheading the project. Schwartz is an adviser to Donald Trump Jr. and previously worked with Steve Bannon.

"If the @nytimes thinks this settles the matter we can expose a few of their other bigots," Schwartz tweeted, responding to an apology from a Times reporter who tweeted something anti-Semitic long ago. "Lots more where this came from."

Those familiar with the operation explained that there are decades worth of public posts these conservative operatives have gathered to go on the attack as the 2020 election goes into full force.

"It is not possible to independently assess the claims about the quantity or potential significance of the material the pro-Trump network has assembled. Some involved in the operation have histories of bluster and exaggeration. And those willing to describe its techniques and goals may be trying to intimidate journalists or their employers," The Times explained.

This isn't the first time the public is hearing about a war between conservatives and specific journalists. CNN reported in 2016 that Fox News had built a dossier on a reporter who was writing a book at Roger Ailes.

In leaked documents acquired by NBC 7 San Diego, a secret database was revealed showing Trump's government is watching at least ten journalists and immigration advocates. The advocates had ties to groups like Border Angels and Pueblo Sin Fronteras, neither of which are extremist groups.

According to The Times, the information published so far has removed all of the contexts and presenting the comments in a misleading way. The goal is to harm the targets professionally.

Read the full report from The Times.