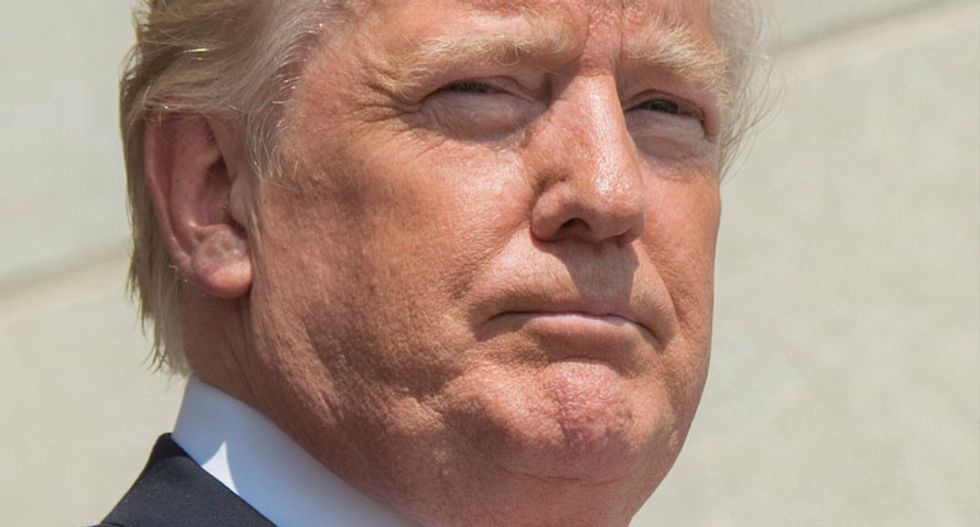 Earlier in the week, Trump falsely claimed on Twitter that "Billions of dollars have been pumped" into Baltimore's local government and insinuated that black political leaders have stolen the money, calling out Rep. Elijah Cummings, D-Md., by name. It may not be coincidental that Cummings chairs the House Oversight Committee, which is investigating various aspects of the president's likely criminal endeavors.

Trump continued to promote this lie at a rally in Cincinnati on Thursday night, declaring that "total one-party control of the inner cities" leads to "stolen money" and that Democratic leaders in such cities "deliver poverty for their constituents and privilege for themselves."

Racists have long trafficked in the myth that black leaders in majority-minority cities are on the take and black voters are inherently gullible. With Trump, there's an added layer at work here, because this accusation, coming from him, is pure projection.

After all, it's Trump himself who is bamboozling his followers into voting against their economic self-interest in enthusiastic support of a leader whose principal goal is to enrich himself with bribes and by redirecting public funds into his own coffers.

It's not particularly controversial to say this: Trump pretty much flaunts how much he's on the take. He happily diverts taxpayer money directly into his own pockets by directing government agencies like the Secret Service to use Trump properties for lodging and other services. He frequently visits his own properties — as of early June, according to the Washington Post, he had spent at least 255 days at Trump-branded resorts or hotels, and played golf on 162 of those days. In doing so, he causes the federal government to spend handsomely at these places, money that goes directly to the Trump Organization (which still pays the president a substantial income).

Trump has also set up multiple channels to collect what must be understood as bribes. At both the Trump International Hotel in Washington and Mar-a-Lago in Palm Beach, people with both foreign and domestic business before the president can open up their wallets and pour dizzying amounts of money into Trump's corporate coffers. The number of channels for bribe-collection are so diverse that it's become impossible to track it all, but the amount collected runs well into the millions.

Trump is also using his properties to evade campaign finance law, to profit directly from both his own campaign and the Republican Party. Money donated to Trump's campaign is spent on rent and other services from Trump's private companies. Republican events are routinely held at Trump properties, so that Trump personally benefits. The Trump Organization has brought in more than $18 million off Republican campaign work alone.

So when Trump talks about politicians who bamboozle voters with racial politics and then use their power for personal profiteering, he's simply projecting his own grift and graft onto others.

Generally, anytime Trump accuses someone of doing something sleazy or underhanded or criminal, he's really talking about his own behavior. This is particularly true when it comes to Trump's racism. Whenever he launches a foul or nasty accusation against people of color, it's a sure bet that whatever he says is better applied to himself.

This goes back at least as far 1989, when Trump took out an infamous full-page ad in the New York Times calling for a return to the death penalty and basically proclaiming the guilt of the Central Park Five, the young black and Latino men who spent years in prison after being falsely convicted of rape and attempted murder.

Trump, of course, is a sexual predator who has racked up decades worth of accusations and is on tape bragging about how enjoys sexual assault. But the timing of that particular false accusation from Trump is of particular interest, since 1989 also happens to be the year that his ex-wife, Ivana Trump, said in a divorce deposition that Trump had raped her. She later retracted the word "rape," though not her account of the event, in which she described him ripping out her hair and forcing himself on her in a fit of rage.

This isn't the only rape accusation against Trump. Journalist E. Jean Carroll has said that he raped her in either 1995 or 1996. Nor is the Central Park Five ad the only time that Trump has leveled unfair allegations of rape at others. He kicked off his 2016 campaign with a speech in which he said that Mexico was sending "rapists" to the U.S., leaning heavily on the belief that rape is largely a crime of a stranger leaping out the bushes. (In reality, 80% of rapes — such as the ones described by Carroll and Ivana Trump — are committed by someone the victim knows.)

The same pattern of Trump's projection is evident in his long, hateful obsession with Barack Obama. While there's no reason to think that Trump faked his own birth certificate, as he repeatedly suggested the first black president did, the underlying accusation — that Obama is a phony who cheated his way to the top — is absolutely and demonstrably true of Trump.

Everything about Trump, except for his racism, has been falsified on some level. His claims to immense wealth that got him on the Forbes 400 list were quite clearly lies. (Investigative reporter David Cay Johnston has repeatedly suggested that Trump is not a billionaire and never has been.) He basically has faked success his whole life, play-acting the part of an ultra-successful business tycoon while driving his businesses into bankruptcy on multiple occasions and running nearly $1 billion in the red in the 1990s. His public image as a marketing and sales genius was shored up by "The Apprentice," a reality TV show that's just as scripted and falsified as most other reality TV shows.

On top of his birtherism, Trump also started to obsess over the idea that Obama's prestigious academic career — undergrad at Columbia, law degree from Harvard — was the result of fakery and cheating. (Which it was not.) In fact, it's Trump whose academic career bears strong indications of string-pulling: As a former admissions officer recently recounted, Trump only got into Penn's Wharton School of Business (which was not all that selective at the time) because his family exerted pressure. Unsurprisingly, Trump does not want any of his school records made public, and has shot down all attempts to reveal them.

One of Trump's favorite insults to lob at opponents, especially if they're black, is "low IQ" or other accusations of low intelligence. This is no surprise, as Trump a racist who has a lifelong obsession with eugenics. But it's almost surely also a projection of his own insecurities about his own failures and weaknesses. Whenever he is asked about books he's read, he spills so much BS as to suggest he's never actually read a whole book. There are indications that Trump, while technically literate enough to tweet and more or less follow along on a teleprompter, struggles to read at anything approaching an adult level. Multiple reports from the White House have suggested that Trump cannot be trusted to read a one-page briefing document and needs information presented to him in graphic form.

Even with his most infamous recent remarks — the claim that four congresswomen of color "originally came from countries whose governments are a complete and total catastrophe" — was also a form of his racist projection. As Hillary Clinton cheekily pointed out on Twitter, all four women are "from America" (three of them were born in the U.S.) and "their government is a complete and total catastrophe," because — well, look who our president is.

Psychological projection and racism have always gone hand in hand. White nationalists, for instance, constantly pretend that white people are under threat from an upside-down version of the same oppression that white people have dished out against people of color for centuries. Conservative complaints about "affirmative action" are largely a projection of guilt about the fact that white people have had enormous advantages throughout American history. Fears of violence from people of color similarly reflects guilt over the racist violence that's been used for centuries to enforce white supremacy, continuing to this day in the form of police brutality.

With Trump, the levels of racist projection reach new heights. That makes sense, since he's a narcissist who uses insults and bombast to cover up for deep insecurities. But the consistency of Trump's projection point towards a better way to understand these racist outbursts, and for journalists to cover them. Instead of focusing on the political fallout, it might be useful to respond, every single time, with clear reporting on the fact that Trump is likely guilty of the very things he accuses people of color of doing.