Trump sparks confusion at G7 before doubling down on China tariffs 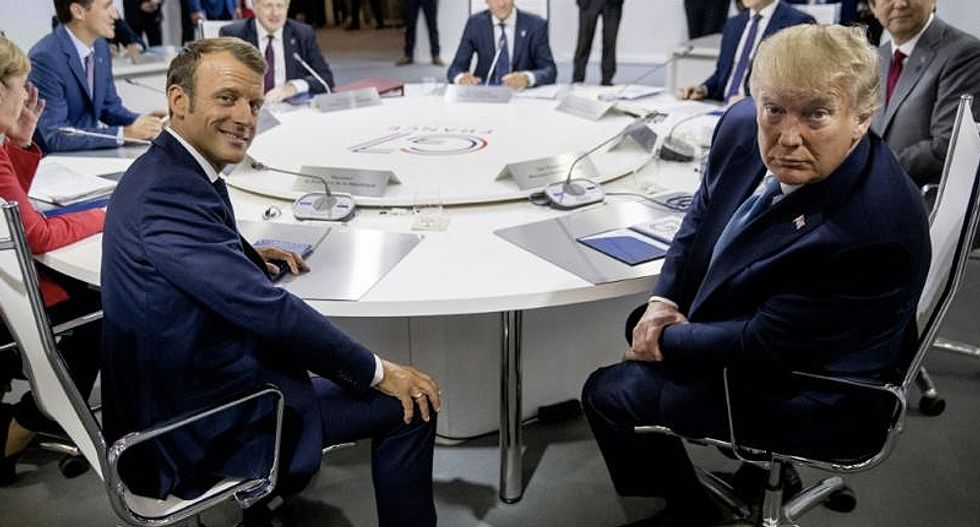 French host Emmanuel Macron is looking to find a way to soothe spiralling tensions between Iran and the US (Photo: POOL/AFP / Andrew Harnik)

President Donald Trump doubled down Sunday on his hard line against China after sowing confusion with statements that he might be willing to soften a trade war G7 partners fear threatens the world economy.

At the G7 summit in Biarritz, France, Trump announced a major trade deal with Japan and promised more of the same with Britain, once Brexit is done.

But the positives were overshadowed by a mix-up over his apparent expression of regret for the latest escalation in the US-China dispute.

"I have second thoughts about everything," he conceded to reporters when asked if he regretted his decision on Friday to ramp up tariffs on all Chinese imports, worth some $550 billion, in retaliation for Beijing's earlier hike of levies on US goods.

"The president was asked if he had 'any second thought on escalating the trade war with China'. His answer has been greatly misinterpreted," she said.

"President Trump responded in the affirmative -- because he regrets not raising the tariffs higher."

Senior US economy adviser Larry Kudlow offered a different spin: "He didn't quite hear the question this morning."

Others attending the G7 summit of wealthy allies certainly wished for detente between Beijing and Washington.

European leaders pressured Trump to back off what he describes as a historic, all-or-nothing struggle to shift China from decades of rampant intellectual property theft and other unfair trade practices.

Trump is also embroiled in threats of a trade war with France and the European Union.

The latest to voice concern was British Prime Minister Boris Johnson, who told Trump at a Sunday breakfast meeting that "we don't like tariffs on the whole".

"We are in favour of trade peace," he said.

On Saturday, French President Emmanuel Macron called the trade tensions "bad for everyone".

"We have to achieve some form of de-escalation, stabilise things, and avoid this trade war that is taking place all over," he said.

Despite clear signs to the contrary, Trump insisted that there was no friction among his close allies.

"I think they respect the trade war. It has to happen," Trump told reporters.

Trump is using the G7 to showcase what he says if the flip side of his tariff diplomacy: big trade deals.

He and Japanese Prime Minister Shinzo Abe announced an agreement in principle on what Trump said was "billions and billions of dollars" of trade.

They hope to sign the deal, covering industry, digital and agricultural sectors, in September.

Trump also dangled the prospect of deal that was "bigger than we've ever had" with Britain.

But in the game of chicken that is the US-China standoff, a battle between the world's two largest economies, the White House made clear it won't blink.

Trump earlier this week called himself the "chosen one" when it comes to dealing with China. The comment, made while looking theatrically up into the sky, caused widespread derision.

Trump subsequently explained that he'd been joking. But the need to win the China dispute is no joke for a president struggling to poll anywhere near 50 percent ahead of next year's election.

Kudlow said that despite the tit-for-tat tariffs, "negotiations between the two great countries continue," with a Chinese delegation expected to visit Washington in September.

The talks and negotiations continue and I think that's very positive," he said.

At the same time, Trump announced just before coming to the G7 that in addition to ever-higher tariffs, he could invoke an obscure law giving him power to order US companies out of China altogether.

Trump walked this back in Biarritz, saying Sunday that he has "no plan now" to take would amount to a nuclear option, unprecedented in any trade dispute.

"The president has lots of options," he told Fox News on Sunday.