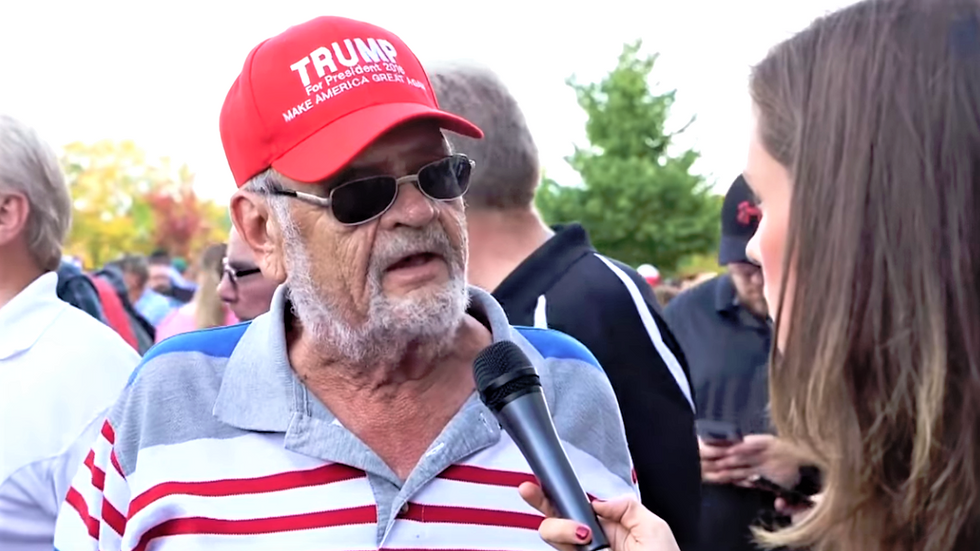 A Trump supporter being interviewed. (Screenshot/YouTube)

Some of the supporters at President Donald Trump's Ohio rally complained about being called racist, and then immediately responded with some clearly racist remarks.

The president rallied supporters Thursday at Cincinnati's US Bank Arena, where some of his fans -- and his son -- complained Trump and themselves had unfairly been accused of bigotry by the media and their loved ones, reported The Atlantic.

“We’re all tired of being called racists,” said one man, 74-year-old Richard Haines. “You open your mouth, you’re a racist. My daughter is a liberal and she’s [using the word] all the time — we don’t talk politics, we can’t — all the time she always accuses me of hate.”

Haines told the magazine he'd just returned from a missionary trip to Thailand, and he explained that he was not a "bigot" like his own father," who “didn’t like black people.”

“Donald is not racist, you know?” Haines said. “He makes a statement, and they take the words out of context and try to twist everything so that he’s a racist -- and I think it’s gonna backfire.”

Two women who had driven an hour and a half from Lexington, Kentucky, told the Atlantic's reporter that Trump's critics were "wishing him" toward being a bigot, and one of them cited her own family's racial diversity to defend herself from charges of racism.

Roseanna insisted she wouldn't join in a chant of "send her back," if Trump brought up Rep. Ilhan Omar (D-MN), but quickly pivoted to hateful remarks about the lawmaker's background.

"I don’t want her stinkin’ Muslim crap in my country,” Roseanna said.

Her friend, 48-year-old Amy, chimed in with bigoted rhetoric.

“That’s not America,” Roseanna said, who questioned whether Omar had legally entered the U.S. “She is a Muslim through and through -- she wants that all here.”

Another Trump fan outside the arena said the crowd in Greenville, North Carolina, had gotten carried away by chanting "send her back," but he betrayed some agreement with their slogan despite his complaints about being unfairly deemed a racist.

“Send her back?” said 72-year-old Robert Morris, chuckling. “But I’d buy her a ticket so she can go on a cruise back. [She is] a very ungrateful person.”