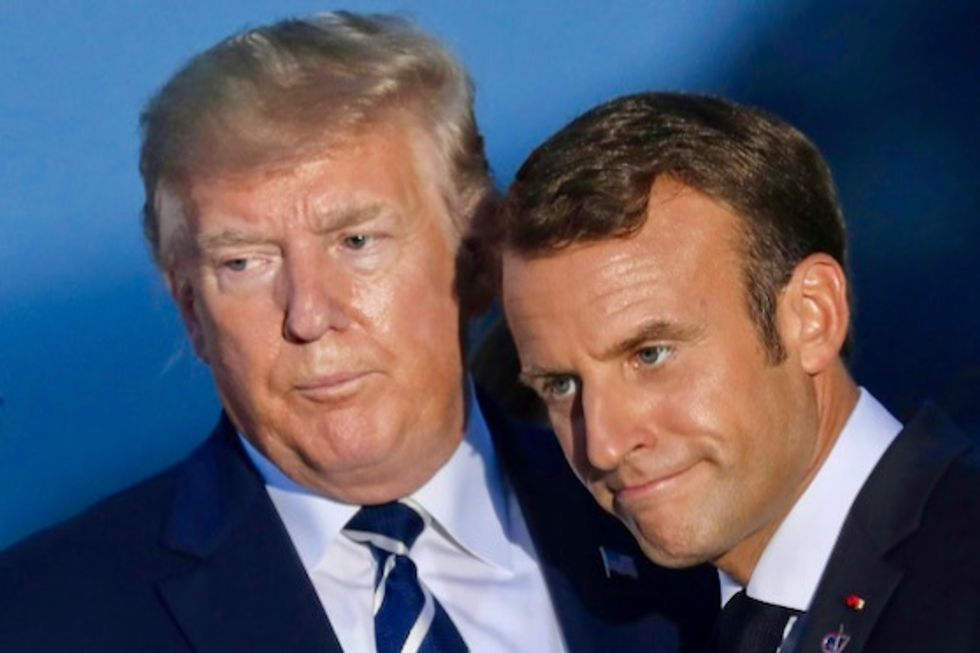 US President Donald Trump said Monday that he had agreed to the Iranian foreign minister flying in for a G7 summit and insisted he was not seeking regime change in Tehran -- a change of tone that could lower tensions.

Mohammad Javad Zarif made a surprise appearance at the summit in Biarritz on Sunday for talks with French President Emmanuel Macron, who is seeking to broker a deal between Iran and the United States.

Zarif also met with French and other European diplomats, but Trump said it was "too soon" for him to meet Zarif.

"I knew everything he (Macron) was doing and I approved everything he was doing," Trump said, adding that the French president "asked for my approval".

In early August, Trump lambasted Macron for sending "mixed signals" on Iran, and at the end of July the US administration imposed sanctions on Zarif.

Trump has put in place a policy of "maximum pressure" on Tehran over its disputed nuclear programme via crippling sanctions that are seen as raising the risk of conflict in the Middle East.

The US president unilaterally pulled out of a landmark 2015 international deal that placed limits on Tehran's nuclear activities in exchange for trade, investment and sanctions relief.

"I believe that for our country's national interests we must use any tool," Iran's President Hassan Rouhani said of his top diplomat's Biarritz visit in a speech aired live on state television on Monday.

But hardliners criticised the initiative, with the ultra-conservative Kayhan newspaper saying the trip was "improper" and sent "a message of weakness and desperation."

Some analysts also cautioned against optimism about Macron's mediation efforts.

"There is considerable room between what President Trump says and what he thinks one day, and what he says and thinks the next," Robert Malley, head of the International Crisis Group, told AFP.

Trump, who will give a press conference before returning to Washington on Monday, proclaimed Sunday that the G7 summit was going "beautifully".

Macron's priority for the three days of talks had been to help allay global tensions, as well as to agree on action to stop the fires blazing in the Amazon rainforest.

Commenting on his escalating trade war with China, Trump said on Monday that trade negotiators would "very shortly" resume talks, describing it as a breakthrough.

He arrived in famed surf town of Biarritz on Saturday shortly after upping the ante with increased tariffs on Chinese goods.

European leaders have lined up to urge caution, and on Sunday, Trump gave a glimmer of hope that he was reconsidering his all-or-nothing approach to the dispute between the world's two biggest economies.

He appeared to admit he had had "second thoughts" about the most recent escalation.

But only hours later, Trump's spokeswoman Stephanie Grisham did a 180-degree turn, saying the president had been misunderstood and that his real regret was not raising tariffs on China even more strongly.

On the final day, the G7 agenda includes discussions of the fires destroying chunks of the Amazon, a scenario that European leaders have described as an assault on the so-called green lungs of the world.

Trump has been less vocal on the issue.

He also stands out from the rest of the G7 leaders in his budding friendship with Brazilian President Jair Bolsonaro, a former army officer who has given freer rein to industrial farmers and loggers who have made the country an agribusiness power -- at a huge cost to the environment.

Macron has urged the G7 to work on reforestation efforts in fire-ravaged areas, but this would require the approval of Amazon nations themselves.

He has also threatened to block an extensive new trade deal between the European Union and Latin America.

Bolsonaro, who on Sunday appeared to endorse a disparaging remark about Macron's wife on Facebook, has denounced the French leader's alleged "colonialist mentality".

"In a week where we have all watched, horrified, as the Amazon rainforest burns before our eyes, we cannot escape the reality of the damage we are inflicting on the natural world," Johnson said in a statement.