Trump’s mind only focuses on ‘a putter, a cheeseburger and someone else’s credit card’: Trump biographer 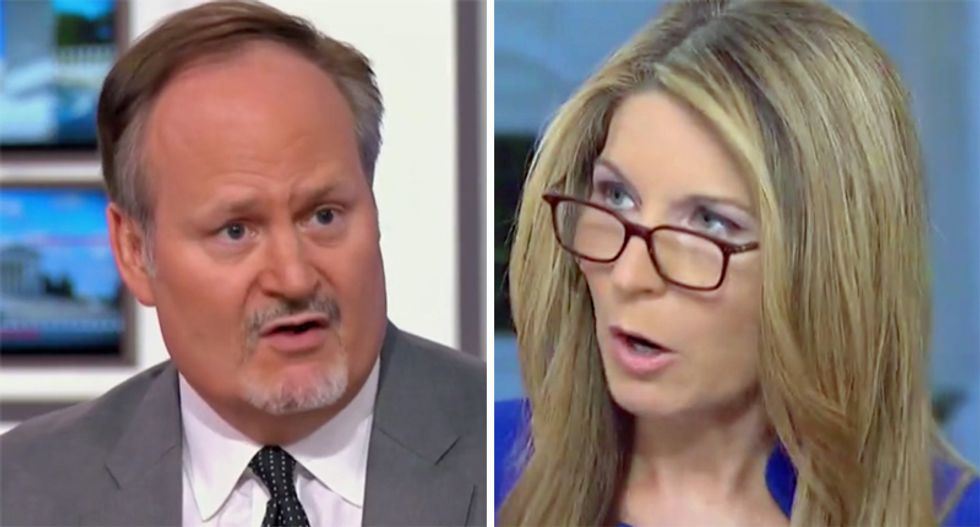 President Donald Trump will not "lift a hand" to pass background checks, the author of the 2005 book TrumpNation: The Art of Being the Donald explained on MSNBC on Friday.

"Deadline: White House" anchor Nicolle Wallace interviewed journalist Tim O'Brien, who was the target of an after-midnight Trump tantrum on Twitter after a Wednesday appearance on MSNBC.

"Breaking news this afternoon that the suspect accused of carrying out last weekend’s massacre at the Walmart in El Paso, Texas, was specifically targeting Mexicans. That’s according to law enforcement officials earlier today," Wallace reported. "And that confirmation comes on the same day Donald Trump promises, as he did after the Parkland shooting, to do something on guns despite being warned not to by the NRA."

"Here’s the truth about Trump’s record on guns, the president actually threatened to veto bipartisan background check legislation. The president scrapped a rule making it harder for some mentally ill individuals to obtain guns and he’s shown little-to-no interest in stronger measures such as an assault weapons ban," she explained. "The bottom line, skeptics have every justification for their pessimism when it comes to Donald Trump, his allies in Congress and stranglehold the NRA holds over both."

For analysis, Wallace turned to O'Brien.

"I want you to explain to me sort of the organization of Donald Trump’s brain," she said. "What do you think, using your predictive powers, what happens next?"

"I don’t think he’s going to lift a hand at all on background checks," O'Brien replied.

"He looks at this very narrowly he likes the fact the NRA came out for him early, when he began running -- he mentioned it again on the White House lawn today. He sees it as a matter of loyalty and nothing else. He realizes the NRA has essentially become the piggy bank of the GOP, giving exclusively to Republican candidates and officeholders, he likes that about them," he continued.

"There’s a possibility NRA lacks the muscles to flex that they once did. But I’m very pessimistic about the idea that Mitch McConnell is going to suddenly step back and Donald Trump will suddenly see the light and the NRA will be inconsequential," O'Brien said. "This is money and guns. It’s not a moral issue for the people who need to change it."

"Is Donald Trump afraid of the NRA?" Wallace asked.

According to Newsweek, Kinzinger took to Twiter to fire back at Carlson for his baseless claims during the recent segment of his show which aired on Tuesday, Feb. 23. "Next step in the whitewash: 'who is this 'Q' of which you speak?' There is no website!' Deny, plead ignorance, misdirect ... is there any question why people are confused? Quit lying, accept reality and use your energy to make us a better country."

Republicans in Tennessee are pushing for state universities to punish student athletes who take a knee during the national anthem to protest against police brutality.

Local news station WPLN reports that every member of the Tennessee Republican State Senate has signed a letter addressed to the presidents of state universities encouraging them to "prohibit" players from kneeling during the anthem on the grounds that "our student athletes represent not only themselves, but also our universities and all the citizens of this state, many of whom view this form of protest as disrespectful."

"A day for History," the regional government of Melilla tweeted along with pictures of workmen backed by a mechanical digger removing the statue on Tuesday evening from the gates of the city.