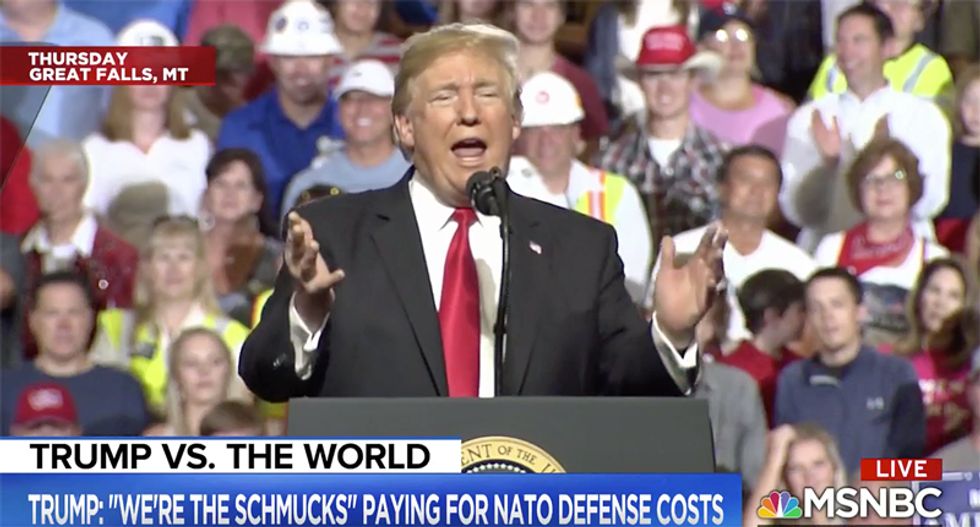 President Donald Trump tells his supporters 'we're the schmucks' for NATO at a campaign rally in Great Falls, Montana.

President Donald Trump likes to insist he's the "least racist person there is anywhere in the world" -- but that's exactly what an extremely racist person would say, according to one best-selling author.

Ibram X. Kendi, the award-winning author of the newly released book "How To Be Antiracist," has explored the history of racial prejudice and the language that perpetuates bigotry, and he told The Guardian why the president's denials fall flat.

"We can distinguish between a racist and an antiracist by how they respond when charged with saying or doing something that is racist," Kendi explained. "No matter what they say or do when charged with being racist, a racist says, ‘I’m not racist.’"

Trump, on the other hand, doesn't reflect at all on the possibility that racism has infected his thinking, and instead issues an implausibly sweeping denial.

"A racist, no matter what, they’re going to keep saying, ‘I’m not racist,’" Kendi said, "and the most extreme racists say: 'I’m the least racist person anywhere in the world.'"