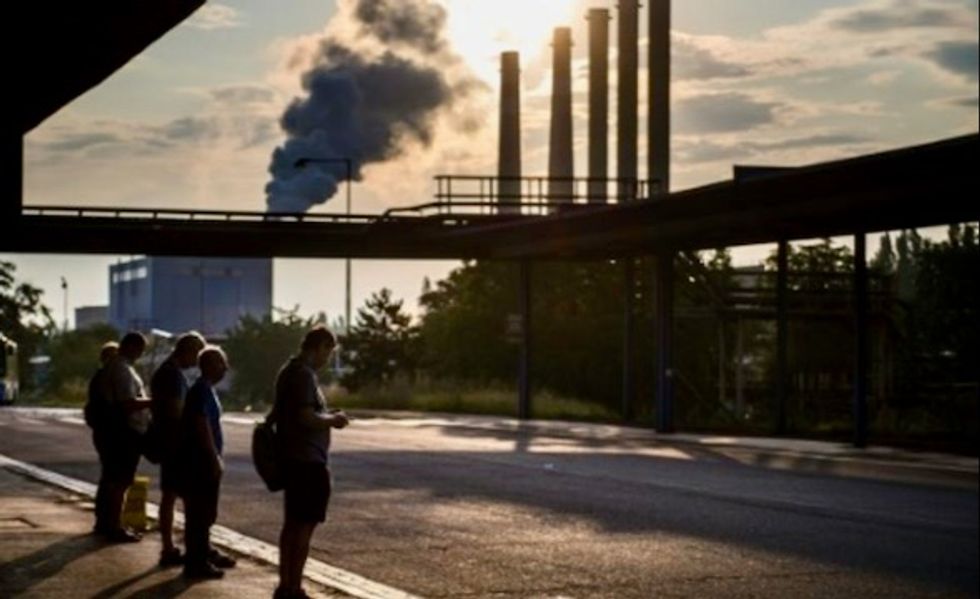 As day breaks through smudged tram windows, Slovak workers heading to the U.S. Steel Kosice plant mull their fate after hearing the company plans to sack a fifth of them.

Some stare silently at the morning haze behind the chimneys of the sprawling communist-era factory. With 12,000 workers, it is central Europe's largest integrated steel producer.

It is also the leading employer in this poor region of eastern Slovakia, a eurozone state of 5.4 million people heavily reliant on auto production.

With regional unemployment at around eight percent -- well above the national average of 4.9 percent -- the job cuts will be painful.

"Everyone's afraid. Young people took loans. What will they do if they lose their jobs?" a mill worker with 20 years under his belt who gave his name as Jozef, asked AFP.

Pittsburgh-based U.S. Steel blames the job cuts on cheap steel imports from outside the European Union and EU environmental regulations that are driving up the cost of the electricity needed to run the massive plant.

In July, U.S. Steel CEO James Bruno announced 2,500 job cuts by the end of 2021 at the Kosice plant and its subsidiaries, insisting that they were necessary to "protect our business, to remain competitive."

Martin Vlachynsky, an analyst with the Bratislava-based Institute of Economic and Social Studies, says steel producers across the EU face similar problems.

Cheap steel from Asia, a result of the US-China trade war, and high carbon emissions costs are taking a toll on European steel mills, making them less competitive, he told AFP.

In May, the European Steel Association urged the EU to help the sector, which has been swamped by cheap steel from Asia since the US imposed import tariffs in 2018.

Workers going on duty filed past those streaming out after working the graveyard shift.

The ritual dates back to 1965 when the first blast furnace began smelting iron ore at the Kosice mill, which now produces 4.5 million metric tons of steel a year, with sales of 2.7 billion euros ($3 billion) and a net profit of 89 million euros in 2018.

Some workers argue that global factors are not entirely to blame for the cuts, insisting that a lack of investment in the aging plant was now taking a toll.

"I work with a tool that was produced 54 years ago," says Dusan Tittek, a turbine operator.

"This company used to make money, but it all went to the US. Now it would have to invest more to survive, but it won't," says the 58-year-old who has spent four decades at the mill.

Others believe the job cuts are meant to pressure the Slovak government into offering tax breaks or other incentives.

"Every now and then, when they want something, they make threats so the government gives in," an electrician named Stefan told AFP.

"A company that doesn't invest depreciates... and it's just a matter of time before it goes bankrupt," he said, calling U.S. Steel's efforts to boost profits through job cuts "a very short-term solution".

So far, U.S. Steel has not offered any severance plans.

But the mood at city hall is grim. Nearly every family in the city of 240,000 has someone working at U.S. Steel.

"We're talking about 2,500 families, which is a tragedy," says mayor Jaroslav Polacek, himself a former mill employee who is determined to stop the cuts.

But analyst Vlachynsky isn't optimistic about solving other parts of the cost equation.

Slapping higher EU duties or carbon taxes on Asian steel imports would only raise costs for European automakers and construction companies, he notes.

"Then these industries would become less competitive... so there's really no way out."