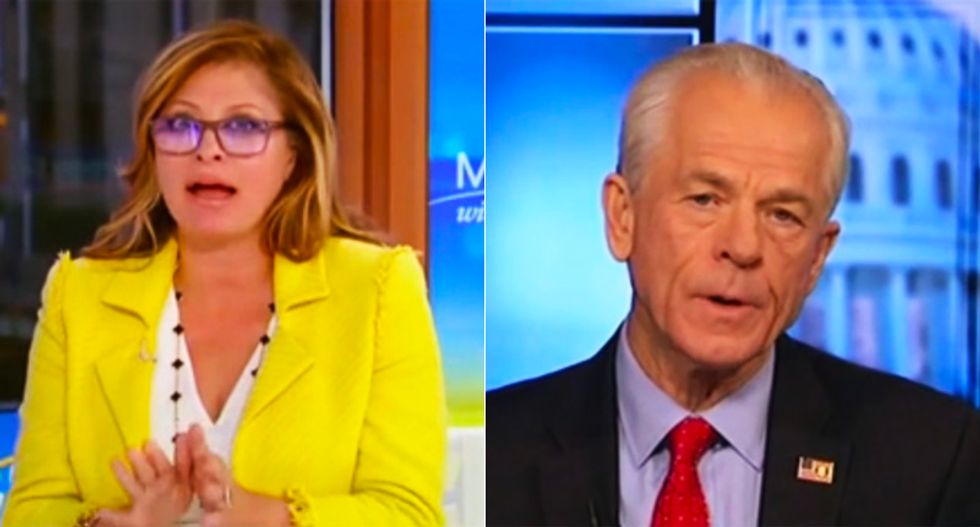 President Donald Trump's chief economic adviser got a rude welcome on the Fox Business Network on Friday morning as host Maria Bartiromo dropped a bomb on him and informed him that China had just smacked the U.S. with an unexpected round of tariffs.

Assistant to the President, and Director of Trade and Manufacturing Policy Peter Navarro -- called by some the president's economic Rasputin -- seemed genuinely stunned by the new $75 billion tariffs in retaliation for the president's trade war.

"We have breaking news, China is announcing new tariff rates to apply and as a result, this market has completely reversed course," Bartiromo stated while displaying a ticker showing the stock market plunging.

"Here is the news," she continued. "Beijing will raise the import tariff rate on some goods. It will apply to that $ 75 billion worth of goods and in a nanosecond this market reversed course -- Dow industrials down 91 points. Joining me right now on breaking news, is Office of Trade and Manufacturing Policy Director, Peter Navarro. It's good to see you, timing is everything, isn’t it my friend?"

"You can’t make this up," Navarro said while shaking his head and then adding, "This is not planned, by the way."

"No, but Beijing is out," she countered. "And it is saying what it is it is going to do. going to do: $75 billion. You knew a retaliatory move was coming, is it worse than you expected?"

Unprepared to respond, Navarro attempted, "Look, we know China is going to do what it is going to do. Here is the thing that is really interesting, in the two and a half years that the president has been in office, he has galvanized the American people and Capitol Hill behind his China policy. And we know why, China steals our stuff. They flood our communities with fentanyl and everything in between. I think the risk here for China when it does things like this is simply to galvanize support even more for the president. So look we are going to have negotiations.”."

Noting his lack of specifics, and Navarro dismissing the stock market downturn, Bartiromo pressed, "No, but it is Peter. You saw what was just happening when you first sat down in that seat this market was up 80 points, right now we are down 127, so you know what comes out of the White House, what comes out of Beijing is impacting markets directly."

After breaking down the specifics of the new tariffs, the Fox Business host once again pressed Navarro, who didn't want to talk about China.

"Negotiations continue hidden closed doors going to resume talks in September," he parried before changing the topic. "In terms of the world economy, in terms of the U.S. economy, I think what really matters here is what European Central Bank is about to do, which is lower interest rates. I think that is good for America, because a stronger Europe is going to mean more export demand for American exports."