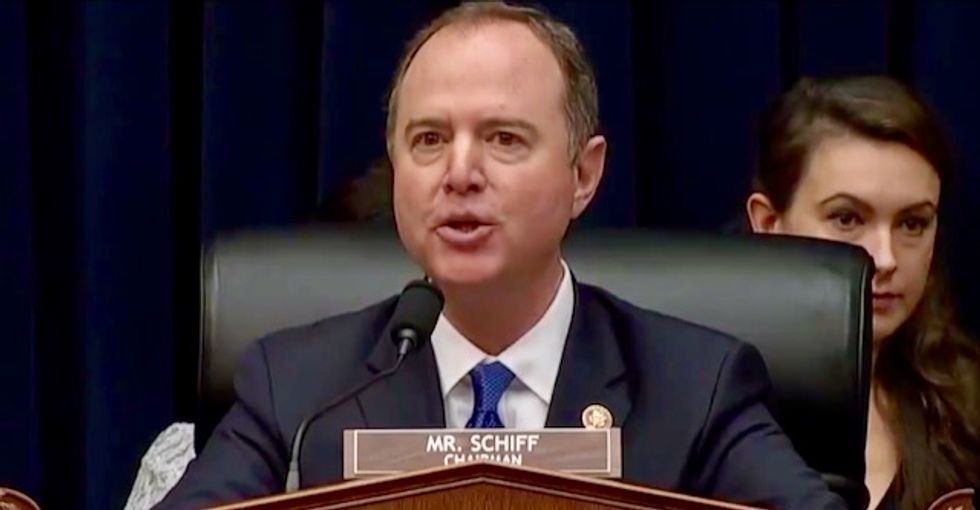 At Thursday's House Intelligence Committee hearing, Chairman Adam Schiff (D-CA) tore into acting Director of National Intelligence Joseph Maguire for refusing to immediately turn over the Ukraine whistleblower complaint to Congress — and laid the foundation to impeach President Donald Trump for obstruction of justice, by tearing holes in Maguire's legal basis for consulting with the White House before the Justice Department.

"Would you agree that the whistleblower complaint alleges serious wrongdoing by the president of the United States?" asked Schiff.

"The whistleblower complaint involved the allegation of that," acknowledged Maguire. "It is not for me in the intelligence community to decide how the president conducts foreign policy."

"Let me ask you about that," Schiff interrupted. "The inspector general found that serious allegation of misconduct by the president credible. Did you also find that credible?"

"I did not criticize the inspector general’s decision on whether it not was credible," said Maguire. "My question was whether it not — whether it not it meets the urgent concern in the seven-day time frame that would follow—"

"You would concur, would you not, director, that this complaint alleging serious wrongdoing by the president was credible?" said Schiff.

"I agree it’s not for you to judge," said Schiff. "You 'shall' provide it to Congress. But you did judge whether this complaint should be provided to Congress. Can we at least agree that the inspector general made a sound conclusion that this whistleblower complaint was credible?"

"That is correct," said Maguire. "I believe that’s also made public, the decision and the recommendation by the inspector general that in fact the allegation was credible.

"Can we also agree that it was urgent that if the president of the United States was withholding military aid to an ally even as you received the complaint and was doing so for a nefarious reason, that is, to exercise leverage over the president of Ukraine to dig up dirt on his opponent, can we agree that it was urgent while that aid was being withheld?"

"There are two things—"

"I’m talking about the common understanding of what 'Urgent' means," cut in Schiff. "This was urgent as everyone understands that term. Can we agree that it was urgent?"

"It was urgent and important," admitted Maguire. "But my job as the Director of National Intelligence was to comply with the Whistleblower Protection Act and adhere to the definition of 'urgent concern' which is a legal term."

"And to adhere to the meaning of the term 'Shall'?" Schiff pressed him.

"In this case you sought a second opinion of whether the term 'shall' means 'shall' by going to the White House?" said Schiff.

"And at any time over the last month that you held this complaint, did the White House assert executive privilege?" said Schiff.

"Mr. Chairman, I have endeavored—"

"I think that’s a yes or no question," said Schiff. "Did they ever assert executive privilege?"

"They were working through the executive privilege procedures in deciding whether or not to exert privilege," said Maguire.

"They never exerted privilege, is that the answer?" said Schiff.

"If they did, we would not have released the letters yesterday and all of the information that’s been forthcoming," said Maguire.

"I did not go for a second opinion," said Maguire. "The question was, is the information contained here subject to executive privilege, not whether it met urgent concern."

"So the first place you went for advice as to whether you should provide the complaint as the statute requires to Congress was the White House?" said Schiff.

"I am not authorized as the Director of National Intelligence to provide executive privileged information," said Maguire. "I think it is prudent, as a member of the executive branch, to check to ensure that in fact it does not."

"I’m asking about the sequencing here," said Schiff. "Did you first go to the White House to determine whether you should provide a complaint to Congress?"

"Okay. Is the first party you went to outside of your office to seek advice, counsel, direction, the White House?" Schiff said, rewording the question.

"And my question is, did you go to the White House first?" said Schiff.

"I went to the office of legal counsel for advice, yes, sir," said Maguire.

"Well, I’m asking which you went to first," said Schiff. "Did you go to the Department of Justice Office of Legal Counsel or the White House?"

"I’m just trying to understand the chronology," repeated Schiff. "You first went to the Office of Legal Counsel, then you went to the White House counsel?"

"No, no, no, sir," said Maguire. "We went to the White House first to determine, to ask the question—"

"Mr. Chairman, as I said in my opening statement, I believe that everything here in this matter is totally unprecedented," said Maguire.