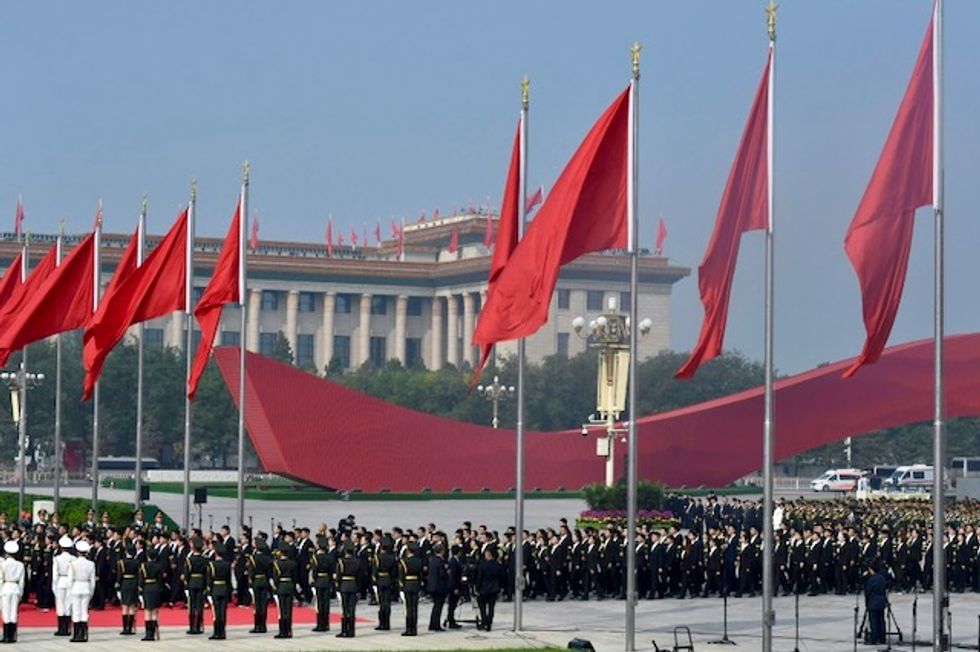 The final seating stands were pulled into place in Tiananmen on Monday, with the whole square and central Beijing set to be closed off by evening POOL/AFP / MADOKA IKEGAMI

Chinese President Xi Jinping vowed Monday to uphold Hong Kong's special status on the eve of a huge military parade in Beijing that risks being upstaged by more protests in the semi-autonomous city.

Some 15,000 soldiers will march across Tiananmen Square and the latest military technology will be displayed as part of the 70th anniversary celebrations, a patriotic show of strength to demonstrate the country's emergence as a global superpower.

But while Beijing is preparing for huge celebrations, pro-democracy protesters in Hong Kong threaten to steal the spotlight, with authorities in the financial hub Monday warning of increased violence by "rioters".

Xi told a reception in Beijing on Monday night that China would "continue to fully and faithfully implement the principles of 'one country, two systems'" in Hong Kong.

"We are confident that with the full backing of the motherland and the concerted efforts of our fellow Chinese in Hong Kong and Macau who love the motherland... (Hong Kong) will prosper and progress alongside the mainland," Xi said.

The Chinese president is expected to speak again ahead of Tuesday's parade at the Gate of Heavenly Peace -- the same spot where Chairman Mao Zedong announced the founding of the People's Republic of China on October 1, 1949.

After the military march a civilian parade will involve 100,000 civilians and 70 floats, with organisers releasing 70,000 doves and 70,000 balloons before an evening performance and fireworks in Tiananmen.

The capital city was decked in red Chinese flags, flower displays, lanterns and political slogans ahead of the tightly-choreographed festivities.

POOL/AFP / MADOKA IKEGAMI Some 15,000 soldiers will march across Tiananmen Square and the latest military technology will be on display

The final seating stands were pulled into place in Tiananmen on Monday, with the whole square and central Beijing set to be closed off by evening.

Some roads were already closed on Sunday.

But the city's pollution levels remained high -- uncharacteristic ahead of a key event in China when authorities tend to close factories and produce clear skies.

Shortly afterwards a group of protesters, their faces obscured by masks and yellow hard hats, held an impromptu press conference in a park and called on people to hit the streets on Tuesday.

AFP / Nicolas ASFOURI A group of protesters, their faces obscured by masks and yellow hard hats, held an impromptu press conference in a Hong Kong park and called on people to hit the streets on Tuesday

"In the face of tyranny, we can only fight as if our last battle. When dictatorship is a fact, revolution becomes a duty," one protester said, reading from a statement.

The southern city witnessed its fiercest political violence in weeks Sunday when riot police spent hours in running battles with protesters, the streets blanketed in tear gas and smoke from burning barricades.

China has deployed elements of the People's Armed Police in Shenzhen, the city bordering Hong Kong, fuelling speculation that Beijing might be prepared to intervene if necessary.

Millions have hit the streets during nearly four months of pro-democracy protests, and hardcore activists have repeatedly clashed with police, in the biggest challenge to China's rule since the city's handover from Britain in 1997.

Democracy activists have dubbed it a "Day of Grief", and there appears little sign of the protests abating in Hong Kong.

On Monday, authorities announced that they were upholding a ban on a planned National Day democracy march, citing security concerns.

The Civil Human Rights Front (CHRF), a group that advocates non-violence and was behind a series of huge peaceful rallies earlier in the summer, hit out at the decision, saying it was the fourth time their march proposals have been rejected.

With legal rallies banned, online forums used by the largely leaderless movement have instead called for wildcat protests across the city in an effort to stretch police resources.

The city's summer of discontent was triggered by an extradition bill to the mainland that has now been shelved.

But the movement has since morphed into a call for free elections and less intervention from Beijing, among other demands.