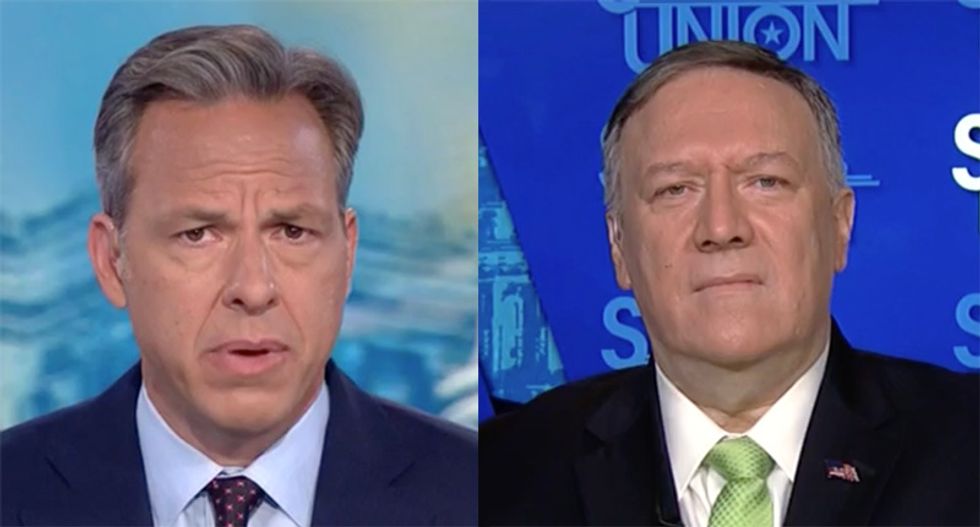 A persistent Jake Tapper grilled Secretary of State Mike Pompeo on Sunday over an aborted secret plan to bring Taliban leaders to Camp David to meet with Donald Trump, pointing out just weeks ago those same leaders were praising the 9/11 attacks on America.

Appearing on CNN's "State of the Union," the Trump adninistration official sidestepped questions about when he learned about the now-cancelled Taliban visit to the U.S. that Trump revealed in a tweet late Saturday night.

With Pompeo not being forthcoming, Tapper moved on to asking Pompeo what the president was thinking by hosting the extremist Taliban leaders at Camp David during the same week when the country will be in the midst of remembrances of the 9/11 terrorist attacks.

"It was just a week weeks ago, I'm sure you're aware, the Taliban put out a video reiterating their support for the 9/11 attacks, blaming the 9/11 attacks on the use and foreign policy," Tapper stated. " I guess the question would be: here's an organization that still supports 9/11. Still believes that the United States was to blame that we brought that on ourselves. Why bring people like that to Camp David? I understand why you want to negotiate for peace but why bring people like that to Camp David? "

"Jake, we're trying to get this accomplished. The American people are demanding it for almost two decades," Pompeo parried before relating a story about meeting with a family grieving over the recent loss of a family member in Afghanistan.

"What about you, what did you think?" Tapper persisted. "Did you have any problem with the Taliban being invited to Camp David? You're an Army veteran. I can't help but think if a Democratic president had talked about having the Taliban come to Camp David to negotiate a peace process that was not already a done deal, that you as a congressman, as a soldier, as a veteran, as a West Point graduate, that you would be rather upset."

"Jake, you're just wrong about that," Pompeo shot back. "I have been fully supportive of this effort, the direction we've taken at the State Department, the effort President Trump has given us, the guidance to go deliver on something that I think is important, and the timing is just right."