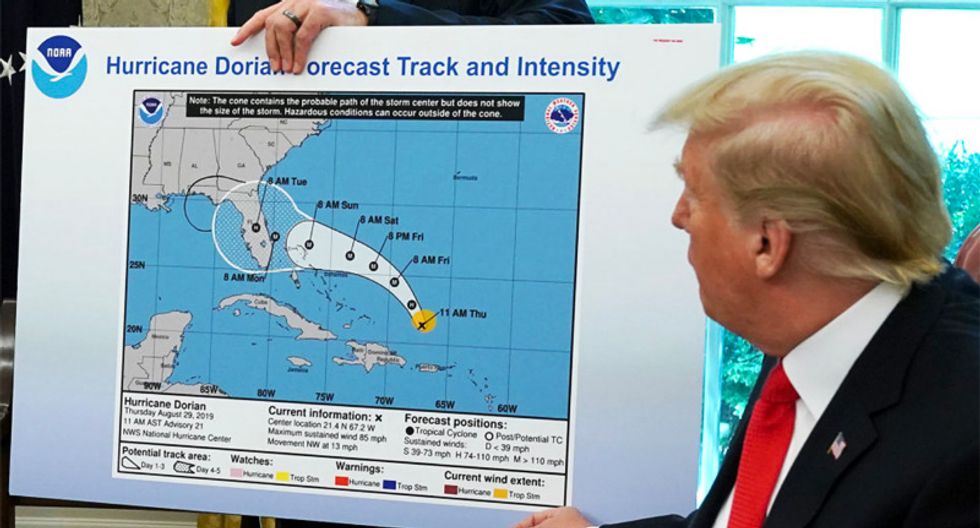 The fallout from Donald Trump's manic campaign to convince the public he was right about Hurricane Dorian threatening Alabama by doctoring a National Weather Service map with a Sharpie has reached conservative corners with one columnist saying the whole affair seems to have been created by the satirical "Onion."

"The Trump presidency has presented a broad array of unique challenges but it’s arguable that the fine art of comedy has been hardest hit (at least, after the farmers). Most political comedy is parody, which is rooted in exaggeration. What on earth can The Daily Show or Saturday Night Live dream up that’s more ridiculous or more outrageous than the real thing?" Egger began.

Noting the president's use of the obviously self-doctored map during a press conference, Egger laid into the president for turning his presidency into a farce.

"Never one to suffer a dunking lightly, Trump has spent the rest of his week rooting around for weather maps that appear to prove him right and the LYING FAKE NEWS wrong, culminating in an Oval Office appearance Wednesday at which he displayed an official forecast chart on which—we are not joking—someone had edited Alabama into the blast zone with a Sharpie marker," he wrote.

More than that, Egger argued, is that the president is making it harder for the political punditry to cover him because he has moved beyond parody.

"None of us can improve upon this magical moment; it is holy high art," he suggested. "It’s become clear that our media is poorly equipped to handle stories where the appropriate takeaway is obvious."

"If the humorists have trouble improving on the joke, we’re the folks tasked with the unenviable task of explaining it," he explained. "You could read a thousand takes on Sharpiegate, but not a single one of them would approach the near-transcendental, anything-is-possible high you got the first time you saw Trump whip out that lunatic map."

In fact, he claims, Trump's conduct and utterances have moved so far beyond the abilities of his critics to make something fresh of it, the only interesting and creative things being written about him come from his defenders.

"The result is practically always worth reading, if only for sheer entertainment value. Donald Trump isn’t an intolerably immoral man—he’s flawed like King David! He isn’t ad-libbing foreign policy decisions according to whim—he’s taking on the Washington establishment and showing humane leadership!" he sarcastically suggested. "Reading these takes is like watching a circus performer swallow swords—it doesn’t accomplish any actual purpose and is probably a terrible idea, but you’re captivated by the slightly grotesque act of virtuosity on display."