'Conspiracy, extortion and bribery': Ex-prosecutor ticks off crimes Trump and Rudy may have committed with Ukraine gambit 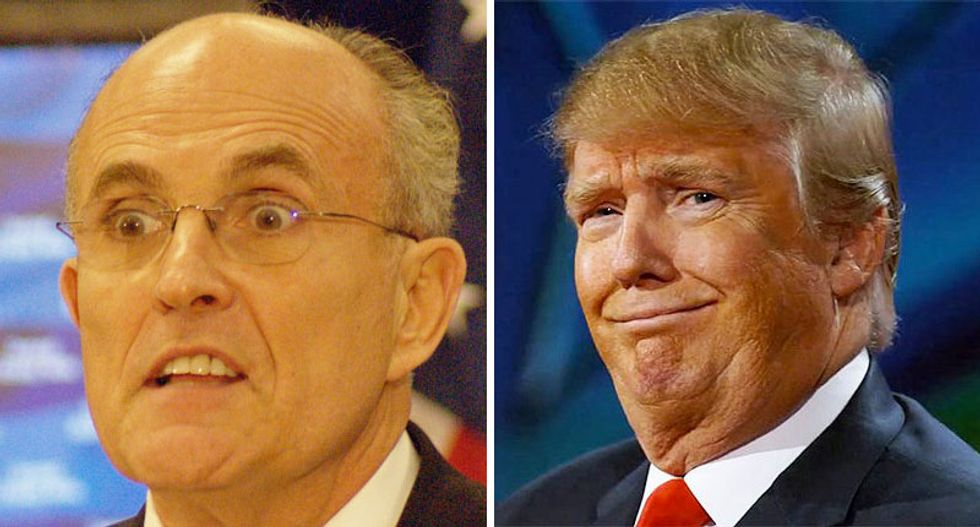 On MSNBC Saturday, former federal prosecutor Mimi Rocah laid out all the ways that President Donald Trump and his lawyer Rudy Giuliani could be breaking federal law with their apparent scheme to push Ukraine into digging up dirt on former Vice President Joe Biden.

"Extortion, conspiracy to engage in extortion, and violating federal election law," said host Alex Witt. "Do you agree with all those premises?"

"I do, Alex, and I would add one to that, which is federal bribery," said Rocah. "Here, Trump essentially was trying to get the Ukrainian president to bribe him, give him information about his political opponent in exchange for aid to the country. So, that is soliciting a bribe. And you know, look, we can get into this more. Obviously, this is my area of expertise, whether something violates federal criminal laws, but I do worry that we're going down a path that we went down with the Mueller investigation, because for the president of the United States, that is not the standard."

"I think Rudy Giuliani should be investigated," she continued. "I don't know if this Department of Justice is independent enough to do that. He is a private citizen, though. He can be prosecuted. The president we know cannot be prosecuted, but this is something that Congress must take action on now. And one other point with respect to what you were saying in the prior conversation with the other panelists."

"You know, this isn't about what Joe Biden's son did or didn't do," added Rocah. "There are avenues to investigate United States citizens through a process known as mutual legal assistance treaties. The Department of Justice does it all the time. If there is reason for a U.S. citizen to be investigated and the aid of another country is needed, there are proper channels to do that through, and they don't include the president of the United States calling up the leader of another country and demanding it in exchange for foreign aid. I think we're going down a rabbit hole there."

"What kind of hot water could Rudy Giuliani be in for having gone over, and potentially at the president's behest, have these conversations with the Ukrainian president and leadership?" Witt pressed her.

"I mean, look, to my eyes, the case against Rudy Giuliani for all of these crimes that we're discussing is quite clear," said Rocah. "I mean, particularly, the campaign finance violations. He is beyond familiar with those. I mean, he just spent two years arguing why Trump didn't violate them. And now here they are soliciting aid from a foreign country to get information on a political opponent. And he's acting as Trump's lawyer, especially working for his campaign. I mean, there's no attorney/client privilege here. There's, you know, there's just no governmental privilege here. I mean, he is acting as a personal representative of the president's with respect to his campaign. And I think he's also liable for conspiracy with respect to bribery and extortion."

"I'm not saying it's an open-and-shut case right now here today, but boy, if I were a prosecutor working for an independent Department of Justice right now, I would want that case," added Rocah. "I would want to investigate it, and I think you could really bring strong charges."