'Getting angry on social media not enough': Thousands across 6 continents mobilize to combat destruction of Amazon Rainforest 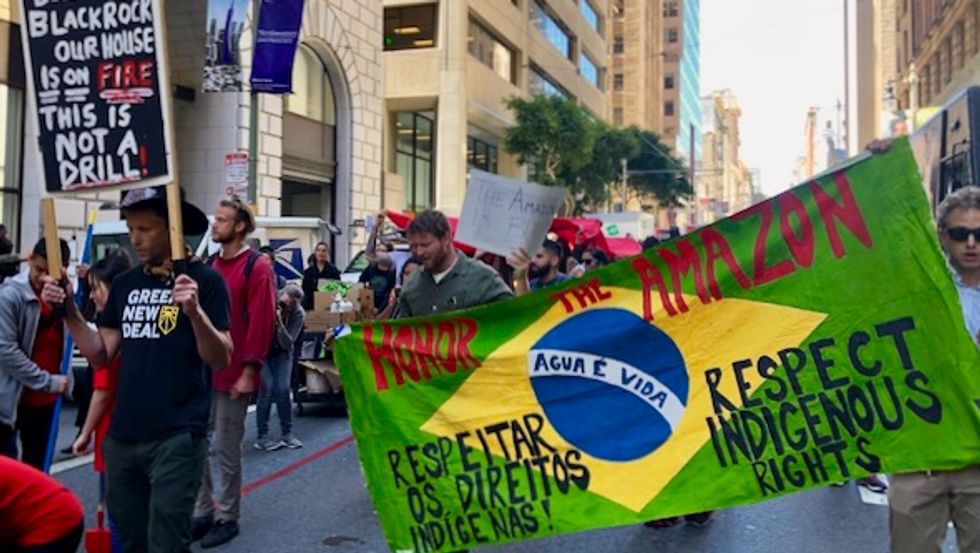 Thousands of people across six continents mobilized to protest the destruction of the Amazon rainforest on September 5, 2019. (Photo: Amazon Watch/Twitter)

Because "getting angry on social media is not enough" to put a stop to the fires and profit-driven policies ravaging the Amazon rainforest, thousands of people across six continents mobilized on Thursday to protest the destruction of the "lungs of the world" at the hands of far-right Brazilian President Jair Bolsonaro and large multinational corporations.

"From Rio de Janeiro and Brasilia to San Francisco and Hong Kong, people across generations, backgrounds, and borders are expressing their outrage over the destructive fires and their solidarity with the determined efforts of indigenous peoples to defend the forest and our collective wellbeing," said Christian Poirier, program director at Amazon Watch, which coordinated the global actions alongside the Association of Indigenous Peoples of Brazil (APIB) and Extinction Rebellion.

The demonstrations, which spanned more than 20 countries, came as thousands of fires continued to devastate the Amazon rainforest. Many of the blazes were deliberately and illegally set by farmers, loggers, and ranchers who, according to critics, have been emboldened by Bolsonaro's aggressive support for deforestation, which was accelerated rapidly during his time in office.

"Thousands of people around the world are mobilizing alongside Brazil's resistance to the Bolsonaro regime," said Poirier.

Demonstrators held a "die-in" outside the London offices of Blackrock, which a recent report described as the "world's largest investor in deforestation."

Sônia Guajajara, executive coordinator at APIB, said to "address the scale of Amazon destruction we are witnessing," people "must get organized, get active, and join forces in defense of the Amazon and in defense of our future."

"We need to stop this absurdity," said Guajajara.