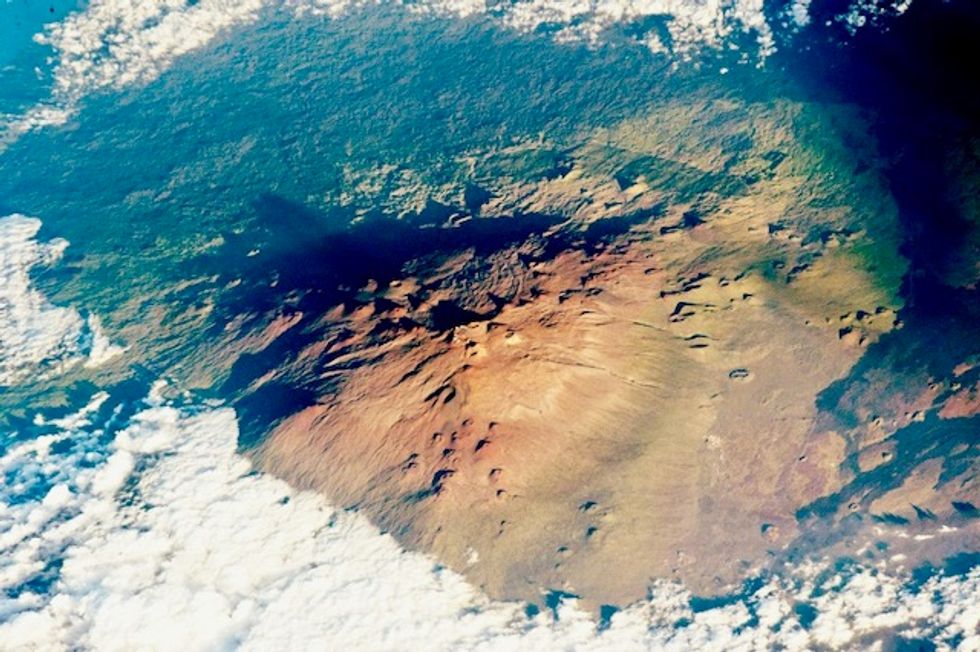 Anger is brewing on the Big Island of Hawaii over plans to build a giant telescope on a dormant volcano that is highly sacred to the region's native population.

For months, hundreds of protesters have delayed the start of construction on Mauna Kea volcano of the so-called Thirty Meter Telescope, or TMT, which astronomers say will have a dozen times the resolution of the Hubble Space Telescope.

The demonstrators, who have converged on the site peacefully, argue that the $1.4 billion project would sit on a volcano that is sacred to Native Hawaiians and would harm the environment.

Celebrities like Dwayne Johnson, Jason Momoa and Bruno Mars have lent their support to the protesters.

"What I realized today, and obviously I've been following this for years now, is that it's bigger than a telescope," Johnson, who lived in Hawaii as a child, reportedly said when he visited the site earlier this summer.

Work on the project -- set to be completed by 2027 -- was supposed to start in 2015 but has been hampered by repeated protests.

"Construction has been delayed for years because of this situation," Christophe Dumas, a French astronomer and head of operations at TMT, told AFP. "The cost has also risen significantly... and the process to obtain a construction permit lasted 10 years."

Protest leaders say the consortium of scientists behind the project can build their scope on a less controversial site, including on a mountain in Spain's Canary Islands, where they say it would be a win-win situation for everyone.

Dumas argues, however, that Mauna Kea "remains the ideal site" in the Northern Hemisphere because of its altitude -- 13,796 feet (4,205 meters) above sea level -- as well as its remoteness and clear skies which make it one of the best places on the planet for astronomical observatories.

The new telescope, according to scientists, would enable astronomers to see "forming galaxies at the very edge of the observable universe, near the beginning of time."

Already, Mauna Kea, which means White Mountain, is home to 13 telescopes housed in 12 facilities at or around the summit, which have been the source of a host of new discoveries and scientific studies.

Some question whether one more telescope -- albeit a giant one -- would make such a big difference.

The answer is a resounding "yes" from opponents.

"I talked to the leaders of the opposition and they made it real clear that not only is it too big, but it's just one too many," said Greg Chun, executive director of Mauna Kea stewardship at the University of Hawaii. "They tell me we have shared this mountain long enough. Enough is enough."

He said Native Hawaiians have repeatedly expressed concerns about the development of the mountain but their complaints have, for the most part, fallen on deaf ears.

Scientists began flocking to Mauna Kea after a tsunami in 1960 devastated communities along the base of the volcano and local authorities, in a bid to revive the economy, began a drive to attract astronomers.

But many observers say the Mauna Kea debate goes beyond just a telescope and reflects deep-seated resentment by some Native Hawaiians over past abuses and the legacy of colonialism in the Hawaiian islands.

Jonathan Osorio, an expert on Hawaiian culture and a longtime opponents of the planned telescope, insists that he and fellow protesters are not opposed to science but they object to telescopes being built on sacred land.

Dumas for his part argues that the telescope is being used as a tool to pressure authorities to seek more autonomy for the native population.

"The telescope would not sit atop the mountain and will be visible from only a small section (14 percent) of the island," he said.

He said his team has gone to great lengths to respect local custom and tradition but the project now needs to urgently get off the ground.

"We can't wait much longer and the next few weeks are going to be critical," he said.