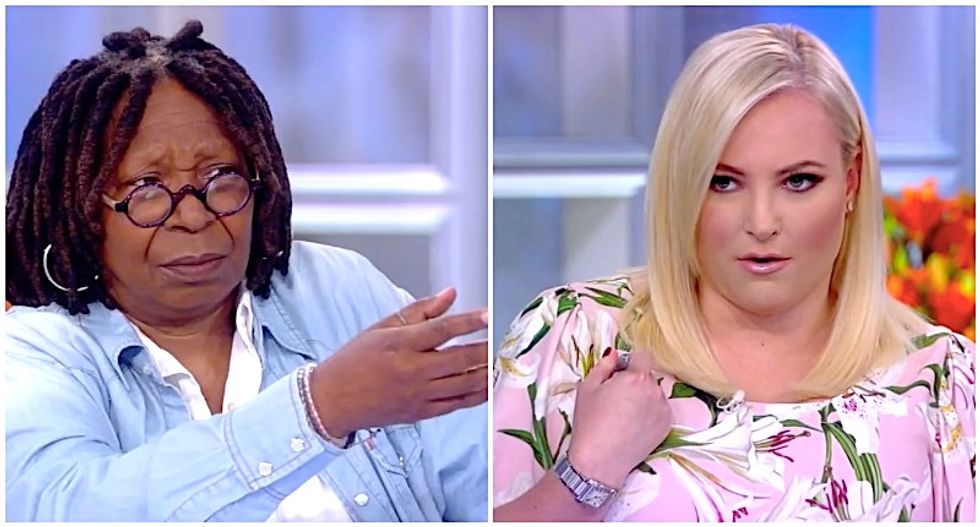 Meghan McCain complained she wasn't given enough time to speak in a roundtable discussion, but host Whoopi Goldberg gave her the green light -- and she complained again when she finished her point.

"The View" discussed Scarlett Johansson's defense of Woody Allen against molestation claims by his daughter, Dylan Farrow, and McCain griped when her turn came around, in her customary cleanup spot behind the other panelists.

"We don't have time," McCain said.

McCain then got more than a minute to make her point.

"I think what's fascinating right now is Scarlett Johansson is a smart woman and she has had a lot of sort of media explosions for different things," McCain said. "Being in a movie meant for an Asian character actress, and talking about playing a trans woman. She clearly doesn't care about the cultural backlash because if she's saying, 'I'll work with Woody Allen,' it's going to be a hot topic."

She then changed the subject to comedian David Chappelle's new standup show streaming on Netflix.

"What's also interesting is Dave Chappelle has a new special out where he goes after everything having to do with cancel culture," she said. "He said Louis C.K., his good friend, was killed in a 'masturbation accident,' and it's sort of an irreverent take on everything that's having to do with men being canceled, among other things, and another thing which has been trending on Twitter, and Rotten Tomatoes, which I always look at Rotten Tomatoes before I see anything, it has a 33 percent rating from critics and a 99 percent score from audiences, meaning that audiences are responding to what he's saying."

"I do think there is a backlash to some of the things happening in the #MeToo moment because," McCain added, "I have said many times, if someone is saying to me, 'Meghan, you have to believe what I'm saying because I'm saying it as a woman, in any context anywhere, I wouldn't survive in life if I just blatantly believed anything anyone said, point blank. That doesn't mean victims shouldn't be heard, and we're at a cultural point, but I also think there's backlash to some of the #MeToo moment we're having right now."

"So, apparently we did have time for me to talk," she concluded. "Sorry."