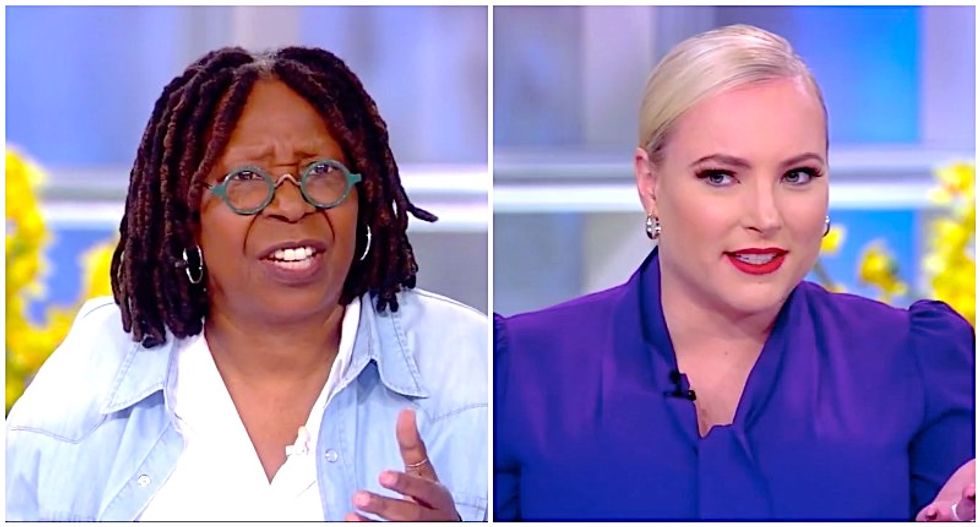 Panelists on "The View" agreed the Dixie Chicks shouldn't be held to a higher standard than President Donald Trump.

The chart-topping group has returned to country radio singing with Taylor Swift on her new song, "Soon You'll Get Better," prompting angry calls from conservatives still bitter over singer Natalie Maines' onstage criticism from London of George W. Bush ahead of the Iraq War.

"If I ever leave the country, you will never hear me criticize -- America's perfect and nothing bad ever happened," said co-host Meghan McCain. "That's just how I was raised."

Host Whoopi Goldberg pointed out that Trump had criticized U.S. intelligence agencies and his political opponents from overseas, and McCain agreed the Dixie Chicks deserved another chance in country music.

"I love the Dixie Chicks, though, and I think it's time to move on because that was over 10 years ago, if not, longer," McCain said. "They're beautiful artists, and I think art is political. I don't agree with what they did but I think they've more than atoned at this point."

"At this point, how can you continue to hold them to a level that the guy who is supposed to be running the country does not hold himself to?" Goldberg said.

McCain and co-host Sunny Hostin agreed, and panelist Goldberg said freedom of speech much be exercised.

"Even if she apologized, 10 years is a long time, and things change," Goldberg said. "She can still be angry, but the beauty of America, the beauty always was, you have the right to do that, you have the right. Now, you know, unless we're changing all the policies to make it so you can't criticize or say anything, but that's a different country. That's not the country I was raised up in."

Goldberg then said Trump should be held to the same standard as everyone else.

"If you hold people to a standard, you have to hold everybody to that standard," she said. "If you are not going to hold him to that standard, then you need to lighten up on what you mad at the Dixie Chicks about, because some of the stuff that has come out of his mouth overseas."

Co-host Joy Behar threw out one obvious example of Trump trashing the nation he leads while overseas.

"Google the Helsinki meeting, and you'll see what she's talking about," Behar said.