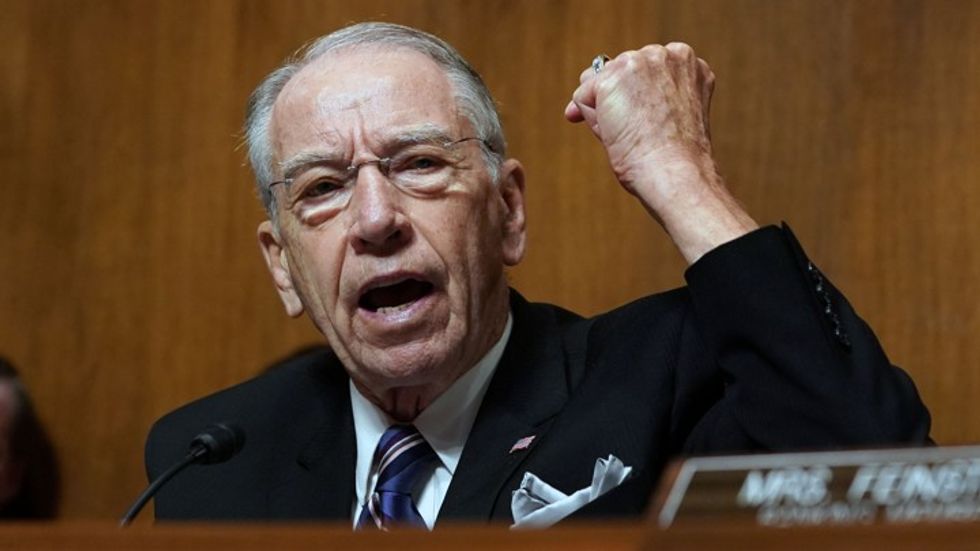 According to a report from Wall Street Journal, Republican lawmakers are working behind the scenes to rein in Donald Trump's penchant for declaring tariffs willy-nilly depending on how he feels about other countries and their leaders at any given time.

As the president trade war rages on -- impacting manufacturers, farmers and consumers alike -- Republicans looking at the 2020 election are desperate to turn around a U.S. economy that looks headed for a recession.

According to the Journal, Kansas Senator Jerry Moran (R) is deeply disturbed by the ongoing devastation due to the president's trade moves, saying, "This has gone on longer than I think people expected it. And so the financial consequences are increasing.”

Moran along with Republican Sen, Chuck Grassley (IA), who chairs the Senate Finance Committee, are meeting with other members of their party and making plans to reach out to Democrats.

The reports states they are looking to assert "congressional authority over the levying of tariffs," with the aim of curbing the "type of tariff-by-tweet policy-making that has whipsawed markets and stressed U.S. businesses in recent months."

According to Sen. Pat Toomey (R-PA), who is pushing legislation requiring Trump to seek congressional approval before imposing tariffs, the law is on the legislator's side.

“The Constitution is very unambiguous,” he explained. "It assigns Congress the responsibility for regulating commerce with other countries and setting tariffs, and yet we’ve significantly delegated that to the president.”

The Journal adds, "Those Republicans who back having more control over tariffs say they aren’t attacking Mr. Trump but rather trying to rebalance trade powers between the legislative and executive branches without hampering the president’s ability to protect national security."

"Mr. Toomey’s bill, which would apply retroactively, would force the president to get Congress’s approval before imposing tariffs under Section 232. It also would tighten the act’s definition of national security and require the Defense Department, rather than the Commerce Department, to justify new tariffs. Eight of the bill’s 18 co-sponsors are Democrats," the report states.

Sen. Jon Tester, a Montana Democrat, agreed with the GOP moves but questioned whether they have the stomach to take on Trump.

“First of all, you’ve got to get folks on the other side of the aisle who are willing to challenge the president,” he said. “The only folks I’ve seen do it aren’t here anymore.”