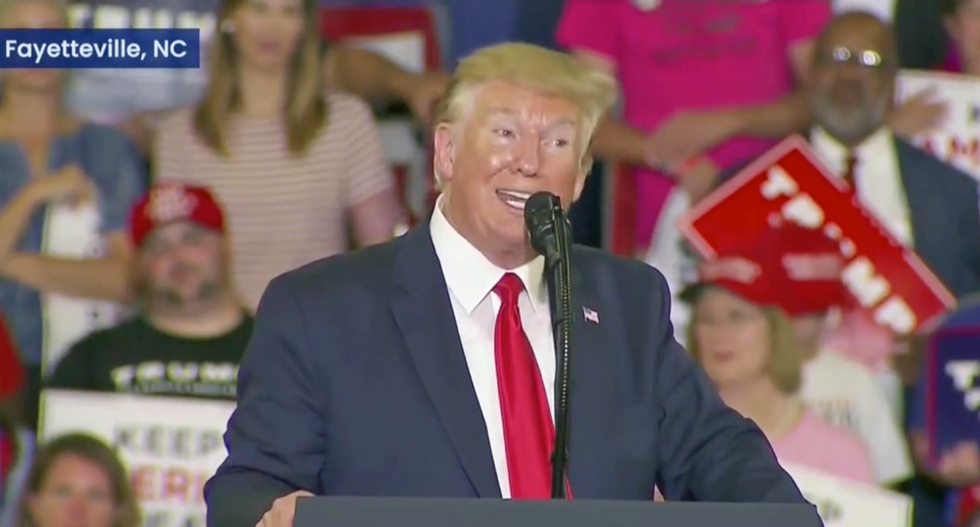 Even though they virtually never censure the president publicly, GOP lawmakers are apparently sick of his antics.

On Tuesday, Joe Scarborough claimed that Republicans were especially appalled at the president's behavior over the summer.

“It has been, we talked about this last week, a cruel, cruel political summer for Donald Trump,” Scarborough said, “and the most remarkable thing, and I do talk to Trump supporters a good bit, what infuriates them and what infuriates people close to him in the White House is so much of these scars are self-inflicted. He can’t get out of his own way.”

From his racist attacks on The Squad to the never-ending corruption scandals, the president may not have many true allies left soon. Scarborough said a Republican insider told him the president is hated by many even within his own party. “He said what Donald Trump doesn’t realize is he is so despised on Capitol Hill, he’s so despised by Republican governors across the country and by members of the House personally, that it’s only a matter of time,” Scarborough added, “and this was last night before these numbers came out, that they start planning ahead for post-Trump Washington, and pretty soon they’re not going to take the slings and arrows for this guy because it’s proving to be a losing proposition.”

Raw Story spoke with Dr. Bandy X. Lee about the president's self-defeating behavior and psychological mechanisms that maintain his supporters' loyalty. Lee is a forensic psychiatrist at Yale School of Medicine. She has been consulting with the World Health Organization on violence prevention since 2002, has taught at Yale Law School since 2003, and is author of the textbook, “Violence.” In 2017, she held an ethics conference that led to the public-service book, “The Dangerous Case of Donald Trump,” and the World Mental Health Coalition. She also convened a panel to assess the president’s mental capacity and chairs a working group on a panel for performing presidential fitness-for-duty tests. Next week, she will be hosting a discussion on the public health effects of silencing experts at Yale Law School (her Twitter handle is: @BandyXLee1).

Raw Story: Nicolle Wallace of MSNBC said: “While it’s no secret that Donald Trump’s presidency is defined by his own personal inferiority complex.... It was still a shock to the system to learn that he’d planned to host the terrorist group that supported the horrific September 11th attacks.” What’s your response?

Bandy X. Lee: The president is deteriorating every day, and he will resort to more and more extreme versions of his maladaptive way of coping. We don’t diagnose not only because it is unethical—there is no way you can diagnose a specific illness without all the medical information, including his records and list of medications. We also don’t diagnose because it will underestimate what is wrong with him. We need to consider multiple types in the personality disorder category alone. There may be an independent reason for his cognitive decline, given his age and family history. A neurological problem could be causing his slurred speech. We also have to ask about drug use. All this comes from a full examination—but we do not need one.

He already failed our mental capacity evaluation. This is a basic test of function, and so outside observations are more accurate than a personal interview. We have the sworn testimony of multiple work associates who interacted closely with him, and there was enough to conclude: basically, he lacks the ability to make sane decisions. He also demonstrates this in real life every day. The results are not ambiguous, since he failed every criterion. This does not exonerate him from anything, by the way: capacity to do a job is different from criminal responsibility, and there is already plenty of evidence of criminal intent.

A president lacking capacity is an emergency—and we should not be standing by. Trying to deny this will plunge us in ever greater danger, while his supporters will simply resort to increasingly bizarre and fantastical beliefs to continue supporting him.

Raw Story: Are you making a political recommendation?

Lee: I comment only on the medical need, wherever it is occurring. This is what it means to be apolitical. Those who are silent because the need happens to be in the political sphere are being political.

Raw Story: That’s interesting. So does that mean we have to heal the political system?

Lee: Yes, there needs to be work both ways, although one is more urgent. I said before that I had a close encounter with a right-wing radio show that reminded me of a brainwashing session. The host is almost certainly personality-disordered—I can say this since I interacted with him, read his book, and am evaluating him as a case study on how amplified individual pathologies diminish the collective mental health of America. In an earlier video, this host ranted over my once canceling an interview with him and called what we were doing a “Soviet-style takedown” of the president. But Soviet psychiatrists used psychiatry corruptly against dissidents, not against the leader. Meanwhile, he employed Communist brainwashing techniques—as documented through Dr. Robert Jay Lifton’s work in China—on the radio show, to keep his audience in line. I explain the step-by-step methods in a chapter I am writing.

“Soviet-style” politicization of psychiatry means that one abuses psychiatry in the service of power, while our group is using psychiatry to be a check on power and to ground people in reality. This is our professional duty, in fact, which is why dictatorships try to eliminate intellectuals as a first step; we saw how NOAA even pressured its scientists to lie about the weather! This is why I keep pointing to the American Psychiatric Association’s complicity with the government as an egregious example of facilitating tyranny so that all kinds of human rights abuses can happen, including tearing children from their parents, mass murders going unchecked, and, worst of all, permitting people’s minds to be hijacked. Their aggressive silencing of mental health experts, in collaboration with the New York Times of all sources, is what caused the nation to be powerless while being kept in the dark about the most critical issue of relevance to its wellbeing.

When the mainstream media are silent on this issue, while the right-wing media perform outright thought reform, it is only natural that the population irrationally come to support an impaired leader, even at its peril.

When a Yale professor once appeared on Fox News and kept shouting, “Education is important! Education needs to be supported!” regardless of what the host was asking, I did not know what he was doing. Now I see that he was trying to cut through the orchestrated framing and the brainwashing techniques. The right-wing radio host who interrogated me had extremely faulty logic, not good enough for middle school let alone of a supposed lawyer. But it made sense from the perspective of trying to inculcate in his audience that he was a learned man and a “great one”—and so he used techniques more than argument in a design to control people’s thoughts. Indeed, those who are quickest to point out that we are acting like Soviet or Nazi psychiatrists are exactly those who revolt the most when we express concerns over resemblances between Donald Trump and Joseph Stalin or Adolf Hitler—and extreme denial is what psychiatrists look for to discover what is true. So it is unsurprising that these groups are employing Communist or Nazi propaganda-style techniques. Am I confusing you?

Raw Story: I think what you are saying is that people accuse others of what they themselves are guilty of....

Lee: Exactly—but you have to watch their patterns first. With Mr. Trump, there is not only lying but almost 100 percent projection. In fact, I am doing an exercise on Twitter where I am “translating” what Mr. Trump is saying by stating the exact opposite, so that people do not get gaslighted or question themselves rather than the president. Once the problem is clear in everyone’s mind, I think the solution will follow. When the time comes, I hope the political people will not make the mistake of ignoring mental health experts again.