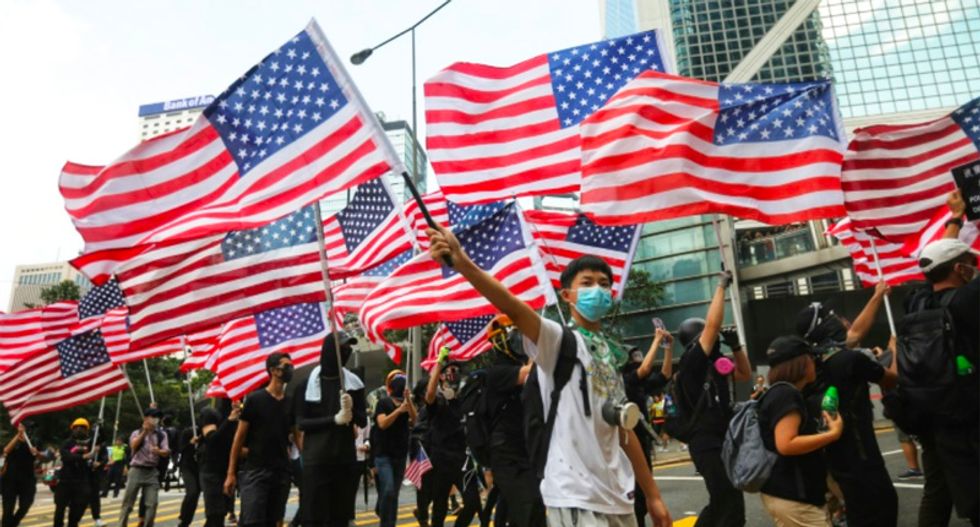 Afp/AFP / Vivek Prakash Many of those marching waved American flags

A huge crowd of pro-democracy activists marched to the United States consulate in Hong Kong on Sunday in a bid to ramp up international pressure on Beijing following three months of huge and sometimes violent protests.

Millions have taken to Hong Kong's streets over the last 14 weeks in the biggest challenge to China's rule since the city's handover from Britain in 1997.

The protests were ignited by a now scrapped plan to allow extraditions to the authoritarian mainland, seen by opponents as the latest move by China to chip away at the international finance hub's unique freedoms.

But after Beijing and city leaders took a hard line the movement snowballed into a broader campaign calling for greater democracy, police accountability and an amnesty for those arrested.

Sunday's protest was yet another massive turnout for a movement that has gripped the semi-autonomous territory and plunged it into a political crisis.

Dense crowds of protesters -- many waving US flags, others singing the Star Spangled Banner -- spent hours slowly filing past Washington's consulate in the thick tropical heat.

They called on the US to pressure Beijing to meet their demands and for Congress to pass a recently proposed bill that expresses support for the protest.

"More than 1,000 protesters have been arrested. We can't do anything but come out onto the streets, I feel hopeless," 30-year-old protester Jenny Chan, told AFP.

"I think aside from foreign countries, no one can really help us," she added.

Hong Kong is a major international business hub thanks to freedoms unheard of on the mainland under a 50-year deal signed between China and Britain.

But Beijing balks at any criticism from foreign governments over its handling of the city, which it insists is a purely internal issue.

Authorities and state media have portrayed the protests as a separatist movement backed by foreign "black hands", primarily aiming their ire at the US and Britain.

While some American politicians on both sides of the aisle have expressed support for the democratic goals of the protesters, the Trump administration has maintained a more hands-off approach as it locks horns with China over trade.

President Trump has called for a peaceful resolution to the political crisis in Hong Kong and urged China against escalating with a violent crackdown.

But he has also said it is up to Beijing to handle the protests.

Washington has rejected China's allegations that it is backing the demonstrators.

In an updated travel advisory for Hong Kong on Friday, the US State Department warned that citizens and consular employees had become targets of a propaganda blitz by China "falsely accusing the United States of fomenting unrest".

The ongoing protests show no signs of abating.

Locals have marched in historic numbers in multiple peaceful rallies while smaller groups of more hardcore protesters have clashed with police, with escalating violence on both sides.

The city's unelected pro-Beijing leader Carrie Lam has struck an uncompromising tone for much of the last three months.

But on Wednesday she made a surprise concession, announcing the full withdrawal of the proposed extradition bill which sparked the demonstrations.

Protesters across the spectrum dismissed the gesture as too little, too late, saying their movement would only end once the remainder of the core demands were met.

"Our government continuously takes away our freedoms and that's why people are coming out," a 30-year-old protester in a wheelchair who gave his surname as Ho told AFP on Sunday.

Analysts say it is difficult to predict what Beijing's next move might be.

Under president Xi Jinping, China has become increasingly authoritarian and dissent is being stamped out with renewed ferocity.

But a move such as sending troops into Hong Kong would have huge economic and diplomatic consequences at a time when Beijing is already facing headwinds from the US trade war.

Officials are also gearing up for the 70th anniversary of the founding of the People's Republic of China on October 1, with huge celebrations planned.

Protesters in Hong Kong are seeking permission for a large rally next Sunday and are also looking to get out a large crowd on October 1.

A plan to disrupt transport routes to the airport on Saturday was thwarted after police fanned out across the city and halted any mass mobilisation.

But small groups of hardcore protesters that evening fought running battles with riot police in what has now become a near daily phenomenon.