‘It was more than I could bear’: North Carolina Democrat reveals why she gave speech that went viral 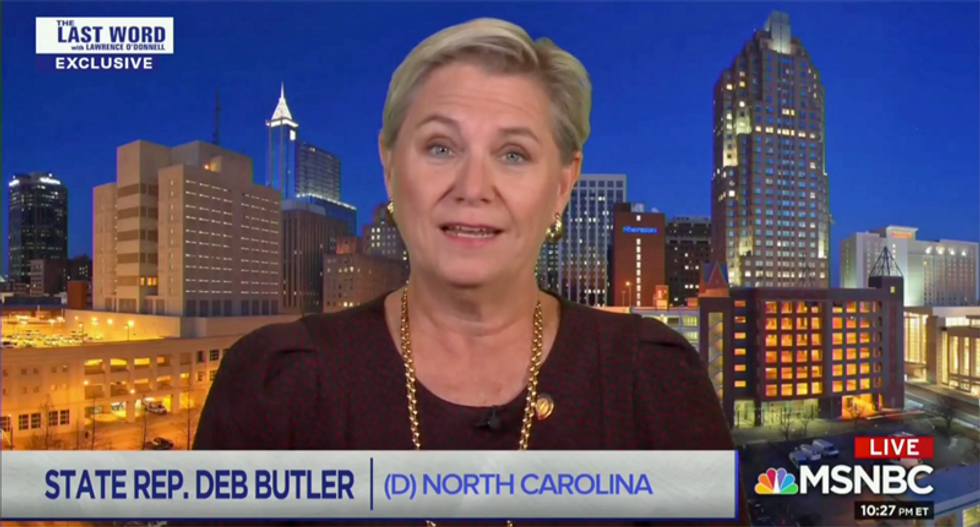 North Carolina state Rep. Deb Butler (D-New Hanover) spoke about the powerful speech she gave on the floor of the state's General Assembly on Wednesday.

The Republican majority in the body used the occasion of the 9/11 anniversary to ram through legislation while Democrats were attending memorial events.

The state's largest newspaper, the Charlotte Observer, blasted the move as a "theft of democracy" in a hard-hitting editorial and Democratic Gov. Roy Cooper blasted the stunt as illegal.

Butler explained how it all went down during an interview with MSNBC's Lawrence O'Donnell.

"You know, Lawrence, North Carolina is a place that used to be revered for public education," she explained. "Our teachers are paid at the very bottom of the barrel in this country, our water is contaminated because we have not fully funded our Department of Environmental Quality, our schools are crumbling because of a lack of infrastructure and we have the working poor, of course, who have not enjoyed health care because of our failure to expand Medicaid."

Butler described her role as a party whip.

"I have asked people to forego cancer treatments. I have asked them to come after surgery. I have asked them to miss anniversaries and birthday parties and first days of kindergarten, so when I saw the speaker about to rob my colleagues of their hard work, it was more than I could bear and I think you saw that," Bulter explained. "It was a day that I’ll never forget and I’m humiliated North Carolina has sunk to this level, and, again, I will not yield, Lawrence. I will not yield."