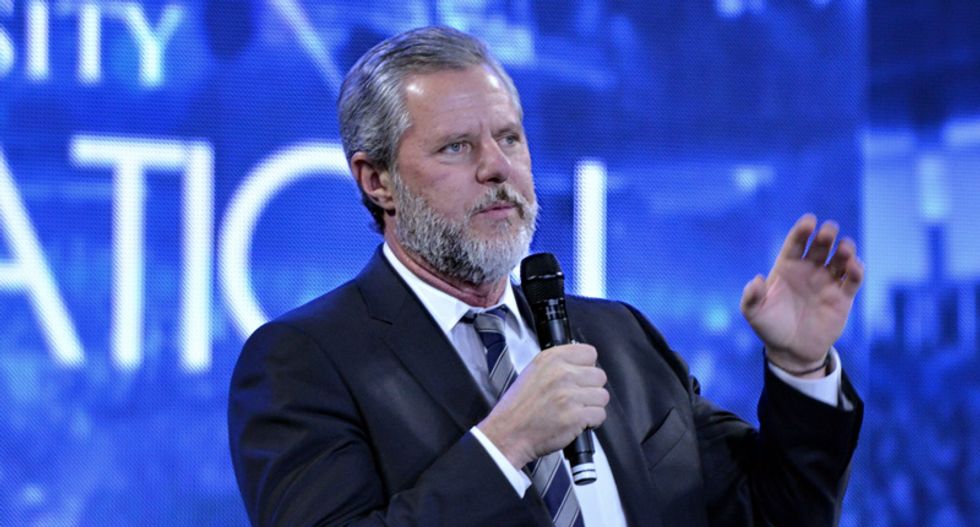 Jerry Falwell Jr. vehemently denied that he appeared in photos taken at a Miami Beach nightclub -- even after shown the evidence -- but that strategy appears to have backfired.

The evangelical Liberty University and its president were the subject of a bombshell report published Monday by Politico, where insiders described Falwell's salacious language and apparent self-dealing.

The report by university alumnus Brandon Ambrosino also examined photographs taken of Falwell and his son Trey Falwell at the Miami Beach nightclub Wall, which university sources said he tried to make disappear.

Falwell denied the photos existed in a statement to Ambrosino before the Politico report was published, saying no photos had been taken of him at Wall or any other nightclub, and insisted the reporter was mistaken even after learning the photos had been obtained for the article.

“If you show me the picture, I can probably help you out,” Falwell wrote in a statement. “I think you are making some incorrect assumptions, or have been told false things or are seeing something that was photo-shopped.”

Falwell again insisted the photos had been doctored after he was shown images of him and his son in the crowd at Wall, and denied that he had ever tried to get the photos taken offline.

That denial -- and Falwell's suggestion that World Red Eye had manipulated the images -- prompted the photography website's founder to respond.

Browarnik rejected the evangelical leader's "baseless allegation" that images of him had been manipulated in any way, and said he was unaware that Falwell had been included in the photos posted on his website.

"We, in fact, did not know Politico’s purpose for licensing the image and were as surprised as anyone to discover that Mr. Falwell was among the partygoers we photographed on July 19, 2014 at WALL Lounge," Browarnik wrote.

That prompted Browarnik to dig around in his archives, and he found more shots of Falwell partying at the club -- which he shared online.

"We reviewed all the images we have from the event and discovered an additional four photos that include Mr. Falwell and two more of his son," the photographer wrote.

Sources told Ambrosino that Falwell was angry the photos had been posted online, because Liberty disapproves of co-ed dancing and prohibits alcohol use.

Staffers told the reporter that Falwell went to John Gauger, who is nominally his "IT guy" but described by sources as his "fixer," and asked him to downgrade the photos on Google searches.

Gauger has worked at Liberty since earning an MBA there in 2009, and he was promoted in 2016 as the university’s chief information officer -- a rise that puzzles some officials at the school.

“I’m not being disrespectful, but John was a nobody,” said one longtime Liberty official. “And the next thing you know, he’s high up in IT.”

Former United Kingdom Prime Minister Theresa May was the first world leader to come to the United States after Donald Trump was elected, but that meeting was fraught with the new president's habit of bouncing from topic to topic during conversations.

In Maggie Haberman's new book, "Confidence Man," she described a strange conversation in which Trump

'I want my documents back!' Trump attacks the National Archives in new Truth Social rant

Former President Donald Trump is demanding that the National Archives and Records Administration give back the top-secret documents he improperly took from the White House and stashed at his Mar-a-Lago resort.

In a new rant posted on Truth Social, the former president cited past instances in which the National Archives had lost information from past White Houses as evidence that documents, which included secrets on another country's nuclear program, were safer being stored at his luxury resort in Florida.

Lauren Boebert 'dangerously close to being upset by a little-known Democratic rival': poll

Pro-Trump Rep. Lauren Boebert (R-CO) could soon lose her congressional seat, according to a new poll cited by Axios.

Axios writes that Boebert, who is well known for making inflammatory statements, is "dangerously close to being upset by a little-known Democratic rival," as a new poll from Keating Research shows her leading Democrat Adam Frisch by a mere two points.