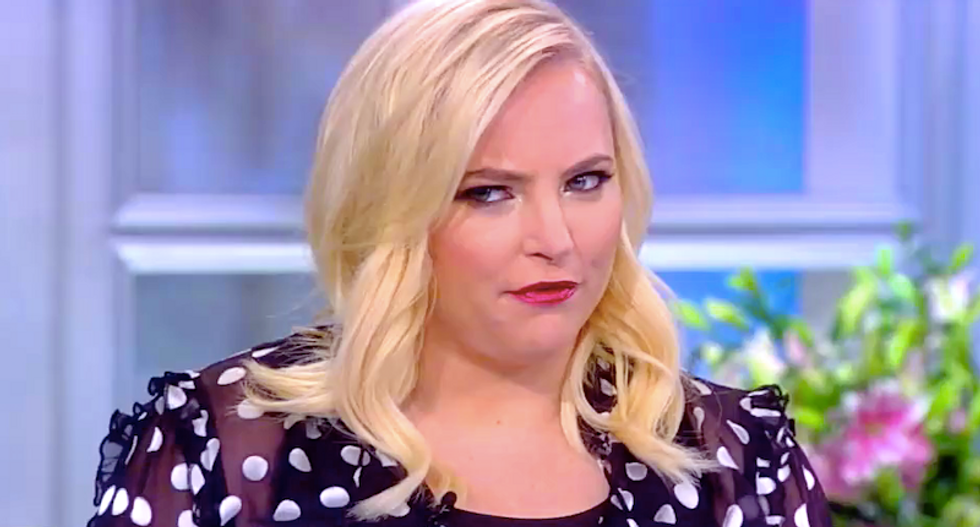 The newspaper reported that the FBI failed to interview former Yale classmates about sexual misconduct allegations against Kavanaugh during the confirmation process last fall, and the authors of a new book found a new accuser.

McCain pointed to an editor's note appended to the story that she believes casts doubt on the new reporting, but Goldberg asked her to clean up some of the claims she made.

Goldberg interrupted, and pointed out that the new alleged victim, according to the Times, declined to be interviewed and friends said she does not recall the incident, which was recounted by former classmates.

"Okay," McCain said, "again, this is very nebulous, and if it's hard for us to explain, and I think the New York Times, the fact they didn't mention it came from Max Stier who was a Clinton defense attorney who battled with Kavanaugh during the Whitewater investigation is a fact we should have known."

McCain said the new allegations were too lewd to repeat on daytime television, but she didn't think the report would change anyone's opinion about Kavanaugh or his fitness to serve a lifetime judicial appointment.

"This is a battleground culture war issue right now," she said. "There's a thing called the 'Kavanaugh effect,' which happened during midterms where moderate Democrats ended up losing their seats because of Kavanaugh. Heidi Heitkamp, Claire McCaskill, Joe Donnelly, Bill Nelson. The politics of this -- going into 2020, you want to impeach Trump and impeach Kavanaugh. Is that the winning strategy for democrats going forward in 2020? I want to know, do you think that's what's going to win over the Rust Belt?"

"It's happened to federal judges, certainly," Hostin said. "I think there have been impeachment proceedings against one Supreme Court justice, probably in the 1800s if I'm -- tweet me if I'm wrong."

McCain asked if a justice hadn't been targeted for impeachment more recently, and seemed genuinely surprised by Hostin's answer.

Hostin said the justice appears safe, but she said the president who appointed him might still face impeachment.

"It's not going to happen, and it's not a winning strategy," Hostin said. "Impeaching Trump, I don't know."