MSNBC's Morning Joe torches GOP and Democrats alike in epic rant: 'This is such a disaster!' 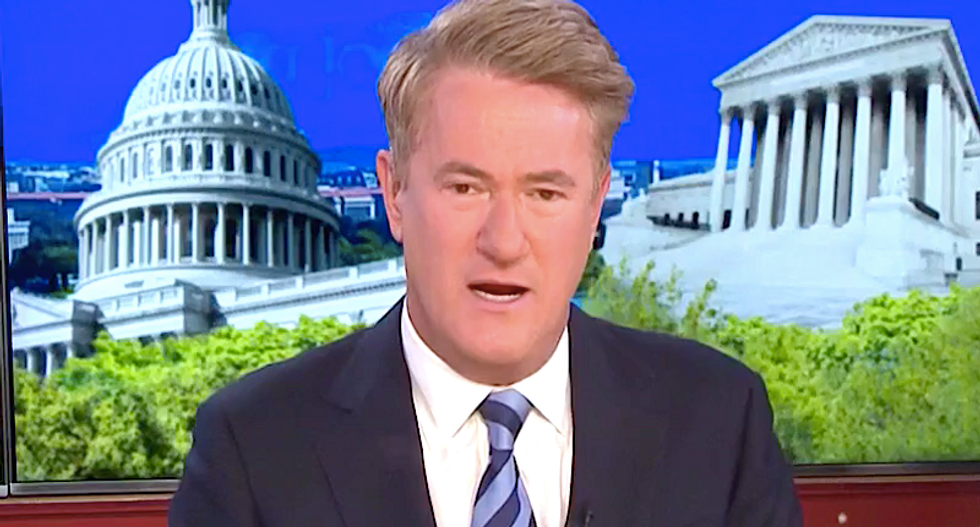 The "Morning Joe" host said the president had made the U.S. and its allies less safe by shredding agreements and cozying up to dictators, and he doesn't understand why Democrats haven't made that more of an issue in the 2020 campaign.

"Let's play the game again, if Barack Obama embraced the Taliban, wanted to bring the Taliban to Camp David without any hope of a deal?" Scarborough said. "What would they do if Donald Trump -- or if Barack Obama continued to play patsy with Vladimir Putin and Obama's own intel community was saying he is a threat to American democracy?"

"You can say the same about North Korea," he continued. "What if Barack Obama fired his national security adviser because the tyrant that runs North Korea, that continues to fire missiles every week, didn't like his national security adviser? I mean, and now we're hearing that Donald Trump is actually mulling giving Iran a $15 billion bailout, a bailout that actually he's flirting with this $15 billion bailout despite the fact that he is the reason why there would have to be that bailout, because he pulled America out of the nuclear deal."

Scarborough has been calling out Republicans for failing to stand up to Trump, but he said Democrats share some of the blame.

"I mean, this is such a disaster and it's laid bare in front of every Republican, every conservative, every Trump supporter to see," he said, "and I just wonder ... why Democrats are so weak. Why are the Democrats so weak that they cannot politically pound a guy who's made friends with the Russians, the North Koreans, the Taliban and now the Iranians?"

During an appearance on CNN's "New Day," attorney and national security expert Bradley Moss laughed off former President Donald Trump's claim to Fox News Sean Hannity that he could declassify top secret documents by just thinking about doing so.

On Thursday, The Daily Beast reported that the family of Tina Forte, the Republican challenging Rep. Alexandria Ocasio-Cortez (D-NY), were caught by FBI agents in a gun and drug bust at their beverage distribution warehouse in the Bronx.

"In a 2020 Facebook post, Forte placed her business at an address on the Bronx’s Stillwell Avenue, and in her financial disclosures to the House Clerk’s office she stated her husband’s income derived from a company incorporated in this same building," reported William Bredderman. "It was this exact location that a Federal Bureau of Investigation agent identified as the site of the crimes of Joseph 'Joey Snapple' Galdieri — to whom Forte is married, according to records in suburban Rockland County, where the pair own a home well outside the congressional district’s borders — and their son Joseph Galdieri Jr."

A mysterious reference on US television to an imminent Russia-Ukraine prisoner swap highlights Turkish President Recep Tayyip Erdoğan's unique role as mediator and friend of both sides in time of war.

Erdoğan flew to New York from a meeting in Uzbekistan with Russian President Vladimir Putin -- his third in three months -- to tell US viewers on Monday that the Kremlin "is willing to end this (war) as soon as possible".