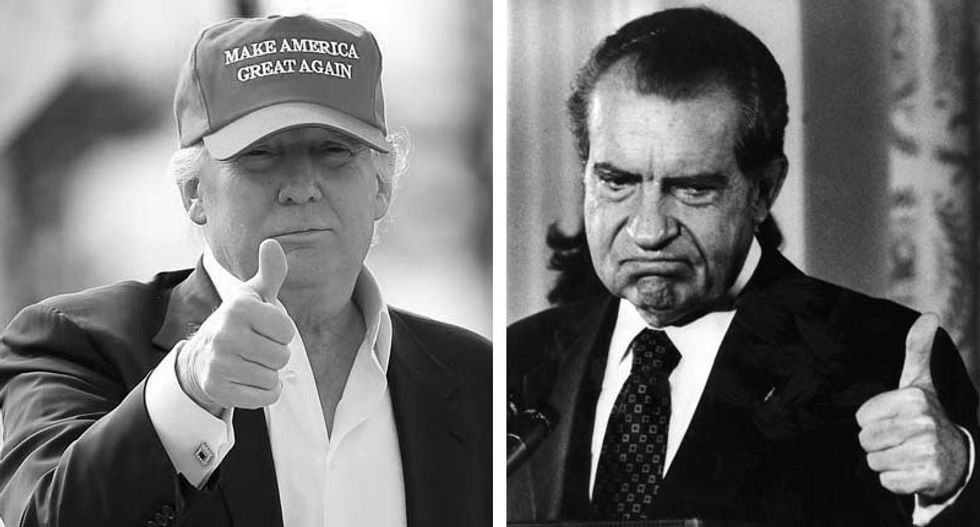 President Donald Trump is gripped by paranoia as more details emerge in the whistleblower scandal over the president allegedly extorting a foreign government to interfere in the 2020 presidential election, according to an MSNBC anchor.

"A single individual has accomplished what the dozens of prosecutors and investigators who worked on Robert Mueller’s 23-month-long investigation never managed to do: focus the attention of Congress and the public on allegations of gross misconduct on the part of Donald Trump in carrying out the nation’s foreign policy, including an attempt by the president to get a foreign government to provide dirt on a political rival," MSNBC's Nicolle Wallace reported. "Today we saw for the very first time the whistle-blower’s complaint, stunning in detail and devastating in substance."

Wallace noted that at "the very moment that [Director of National Intelligence Joseph] Maguire was testifying to the good faith in which the whistleblower sounded the alarm, Donald Trump made an allegation of his own, attacking the whistleblower and his or her sources at a private event morning in New York using language that is hard to consider anything but threatening," Wallace noted.

The host played the clip of Trump suggesting those who talked to the whistleblower should be executed.

"He’s basically saying that the whistle-blower is almost a spy and that the people in his own administration who spoke to this person, that they are basically almost spies themselves," Stokols explained. "Then he goes on to this riff casually talking about, you know, how in the old days spies and traitors were dealt with more harshly. And you can read into that what you will. The tone seemed casually menacing if you want to describe the way he was."

"We know that Attorney General William Barr really broke with his predecessor Jeff Sessions and even Matt Whitaker when he testified before Congress that he believed Donald Trump had been spied upon. Donald Trump sitting next to Ukrainian president Zelinsky yesterday got right back to the origins of the Russia investigation. We know that’s on his mind. This paranoia which was really a hallmark of Richard Nixon’s final days and months in office seems to be unavoidably obvious in Donald Trump," Wallace noted.

"It is," Stokols replied. "It's always in plain sight with this president."

She’s sharing a piece of her mind. Britney Spears slammed her sister Jamie Lynn and the rest of her family in a Thursday night Twitter post. “My family ruined my dreams 100 billion percent and try to make me look like the crazy one,” she wrote in a lengthy note. “My family loves to pull me down and hurt me, always, so I am disgusted with them!!!!” The “Piece of Me” singer, 40, said she watched a recent interview that Jamie Lynn did and was bothered by two things: Her sister describing her as “out of control” and Jamie Lynn’s performance of Britney’s songs in 2017. Britney has spoken before abo...

An Alaska police officer has been fired from his department after he made a social media post that some claimed to be supportive of Nazi Germany. But the former officer is claiming the post was taken out of context, Juneau Empire reports.

Johnny Duane Pickle, 43, started working for the Petersburg Police Department at the end of last June.

Donald Trump,Jr. attacked Kavanaugh as being like conservative Chief Justice John Roberts, who was nominated by George W. Bush.