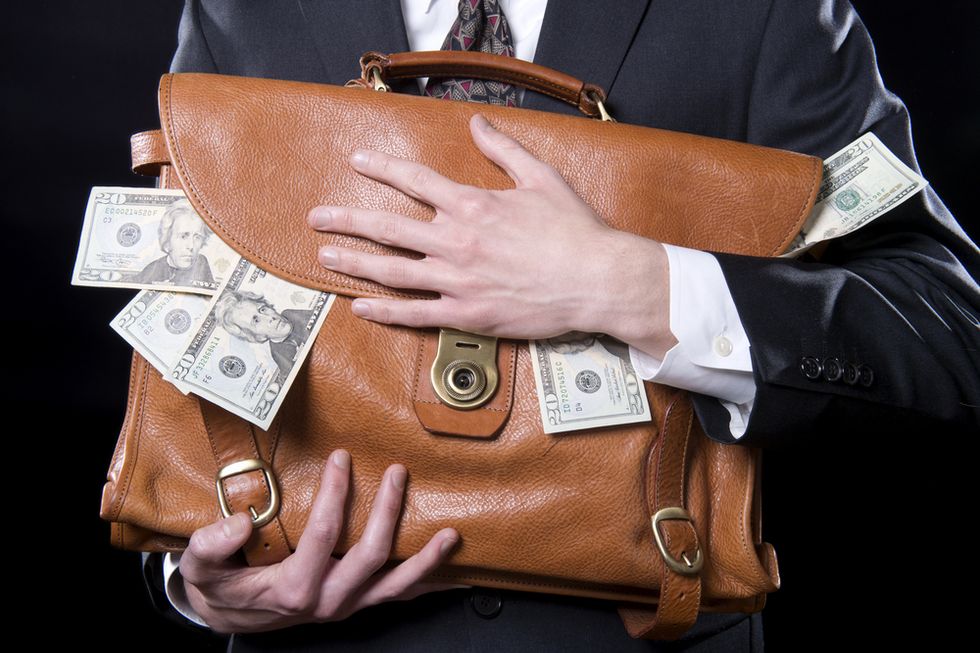 A briefcase full of money (Shutterstock).

In one of the first Justice Department cases of its kind, Maryland political consultant Kelley Rogers pleaded guilty to wire fraud on Tuesday for operating multiple fraudulent political action committees that raised money from donors for conservative causes but kept much of the funds for Rogers and his associates.

Rogers’ arrest and indictment took place shortly after Politico and ProPublica investigated one of Rogers’ PACs, Conservative Majority Fund, which since 2012 has raised close to $10 million — mostly from small-dollar donors, many of them elderly — while giving out just $48,400 to politicians.

Court documents state Rogers raised millions of dollars using “materially false and fraudulent pretenses, representations, and promises” in his solicitations to donors, made up fake bills for the PACs, including Conservative Majority Fund, and made false disclosures about them to the Federal Election Commission.

“Rogers swindled millions of dollars from individuals attempting to participate in our democratic process,” said Timothy R. Slater, assistant director in charge of the FBI’s Washington Field Office, which was involved in the investigation into Rogers. “Instead of using donations to provide assistance and support to military veterans, as he advertised, Rogers used the money to benefit himself and his associates.”

An attorney for Rogers did not respond to a request for comment. No one else has been charged.

Our story detailed how Conservative Majority Fund took information it had collected about donors for the American Conservative Union, the famed operators of the annual CPAC conference, and used that information to build a PAC that preyed on those donors fears. While promising to fight Barack Obama and illegal immigration, internal emails and documents showed that Rogers and his associates instead funneled the money back to themselves.

Until recently, PACs such as those operated by Rogers operated with little oversight from the federal government. But the Department of Justice began to take steps to crack down earlier this year. It sentenced another man, William Tierney, to two years in prison for operating multiple PACs that solicited money for charitable-sounding causes, such as fighting cancer, but did not use the money raised for those purposes.

Rogers’ guilty plea represents a step forward for enforcement, said Larry Noble, former general counsel at the Federal Election Commission. “One fraud case doesn’t make a change of policy, but hopefully this is just the beginning,” Noble said. The DOJ’s ability to charge PAC operators with fraud or tax evasion is one of the federal government’s only avenues for cracking down on so-called scam PACs, he said, “so it is significant if the Department of Justice is going to start going after these people.”

Rogers, his consulting firm and a PAC he operated called the Conservative StrikeForce were sued in 2014 by Ken Cuccinelli, a Republican candidate for governor in Virginia who now serves as acting director of citizenship and immigration services in the Trump administration. Cuccinelli’s suit alleged that Rogers raised more than $2 million by claiming he was assisting the Republican’s campaign but spent almost nothing to support it. In 2017, the FBI raided Rogers’ Annapolis office. The criminal charges against Rogers stemmed from his involvement in the 2013 Virginia elections.

In addition to misleading donors, Rogers also created fake invoices for at least four PACs that he controlled, including Conservative Majority Fund, court documents show. Rogers worked “with others in his inner circle, particularly telemarketing, email and direct mail vendors, to cause the creation of fake invoices.” Rogers would pay the invoices to firms under his control or controlled by associates who would “kick money back” to him, according to the court documents.

Court filings also show that Rogers used two of the PACs he controlled, Conservative Majority Fund and Tea Party Majority, to pay debts the Conservative StrikeForce incurred as a result of Cuccinelli’s lawsuit. The two committees paid about $249,000 to Conservative StrikeForce, violating federal campaign contribution limits. In addition, Rogers filed FEC reports “in order to conceal from donors and the federal government the true nature of those payments,” according to court documents.

Rogers agreed to pay $491,299 in restitution to victims of the fraud scheme, as well as a forfeiture judgment of $208,954 as part of his plea agreement. He is scheduled to be sentenced in January.