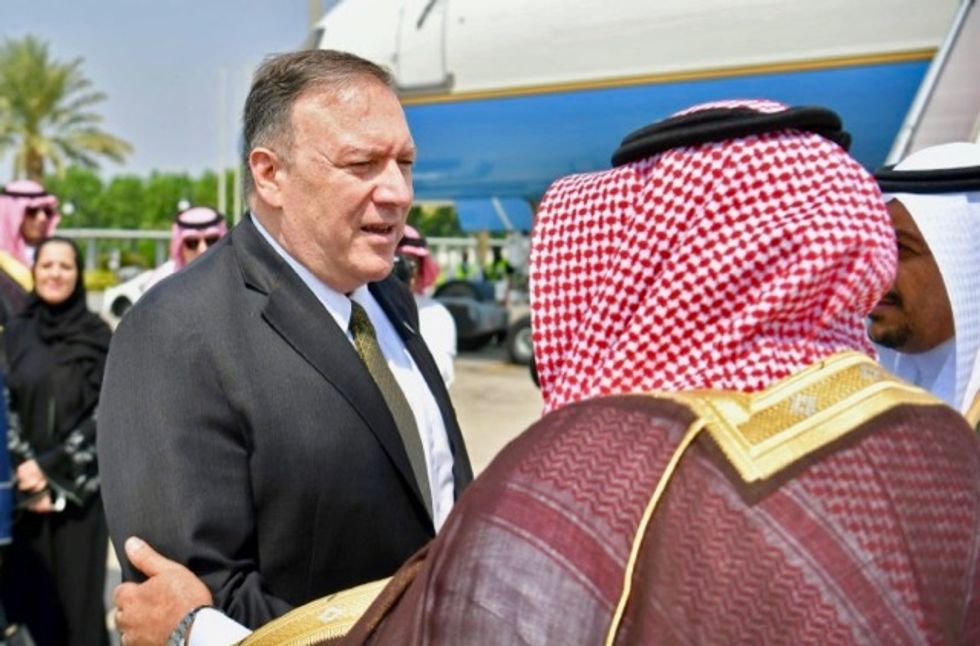 US Secretary of State Mike Pompeo speaks with a Saudi official before boarding his flight from Jeddah, Saudi Arabia to the UAE POOL/AFP / MANDEL NGAN

The US wants a peaceful solution to the crisis sparked by attacks on Saudi oil facilities, Secretary of State Mike Pompeo said Thursday, after Iran raised the prospect of "all-out war".

Pompeo has blamed Iran for the dramatic weekend assault on two facilities, condemning an "act of war" which knocked out half the kingdom's oil production.

The rhetoric has raised the risk of an unpredictable escalation in a tinderbox region where Saudi Arabia and Iran are locked in a decades-old struggle for dominance.

After meeting with allies in Riyadh and Abu Dhabi, Pompeo said there was an "enormous consensus in the region" that Iran carried out the attacks, despite its denials and Yemeni rebels' claims that they were responsible.

But Pompeo said the US was intent on finding a way out of the confrontation.

"We'd like a peaceful resolution. I think we've demonstrated that," he told reporters.

"I hope the Islamic Republic of Iran sees it the same way."

Iran's Foreign Minister Mohammad Javad Zarif earlier warned any US or Saudi military strike on Iran could cause "all-out war".

"We don't want war," he told CNN in an interview aired Thursday, "but we won't blink to defend our territory."

Saudi officials on Wednesday unveiled what they said were fragments of 25 drones and cruise missiles fired Saturday at the oil facilities in the country's east, engulfing them in flames.

"The attack was launched from the north and unquestionably sponsored by Iran," defence ministry spokesman Turki al-Maliki said, although he refused to be drawn on whether Saudi officials believed Iran directly carried out the operation.

Tehran-linked Huthi rebels in Saudi Arabia's southern neighbour Yemen have claimed responsibility, but both Washington and Riyadh have said the operation was beyond the Yemeni insurgents' capabilities.

The Huthis have however hit dozens of targets in Saudi Arabia, and their rapidly advancing arsenal has exposed the kingdom's vulnerability despite its vast military spending.

Al-Huthi Group Media Office/AFP / -Images from the al-Huthi Media Office show what they say are satellite pictures of before, on the right, and after the weekend attack on Saudi Aramco's oil fields

They also threatened the United Arab Emirates -- a key member of the Saudi-led coalition fighting the Shiite rebels -- with strikes against "towers made of glass that cannot withstand one drone", in apparent reference to the glitzy cities of Dubai and Abu Dhabi.

US military planners weighing retaliation have reportedly prepared a list of Iranian targets including the Abadan oil refinery, one of the world's largest, and Khark Island, the country's biggest crude export facility, the New York Times said.

Other potential targets include missile launch sites and other assets of the elite Islamic Revolutionary Guard Corps, along with bases near the Gulf.

"Any strikes against Iran would almost certainly be carried out by volleys of cruise missiles from (US) Navy vessels. Strike aircraft would be aloft to carry out attacks if Iran retaliated against the first wave," the newspaper said.

The United Nations said Thursday that experts had arrived in Saudi Arabia to investigate Saturday's attack, "at the invitation of the Saudi authorities".

The latest spike in tensions has dampened speculation of a meeting between US President Donald Trump and his Iranian counterpart Hassan Rouhani on the sidelines of the United Nations General Assembly next week.

French President Emmanuel Macron has been pushing for the meeting to defuse the standoff over the Iranian nuclear programme.

But on Thursday, a French presidential official who asked not to be named said Saturday's attack "creates a new context".

"There are still lots of things to sort out before we can see how to create the conditions for the United States and Iran to enter into a negotiation," the official said.

Al-Huthi Group Media Office/AFP / -The US has insisted the attacks came from Iran, but Yemen's Huthi rebels say they were behind the strikes on Saudi Aramco's processing plants in Abqaiq and Khurais

But Iran's foreign ministry reported Thursday that Zarif was set to leave for New York on Friday, apparently implying that both he and Rouhani had received visas for the UN summit.

State media had on Wednesday cast doubt on whether they would secure the necessary permits.

Zarif has been under US sanctions since July 31.

However, with tensions in the Gulf once again threatening to bubble over, Cinzia Bianco, a Middle East analyst at the European Council on Foreign Relations, warned of "an out-of-control chain of escalatory events."

"Inside Saudi Arabia, there is uncertainty over the most appropriate course of action," she told AFP.

"However the dominant thinking there points to the US targeting critical infrastructure in Iran so as to minimise or exclude any human cost."