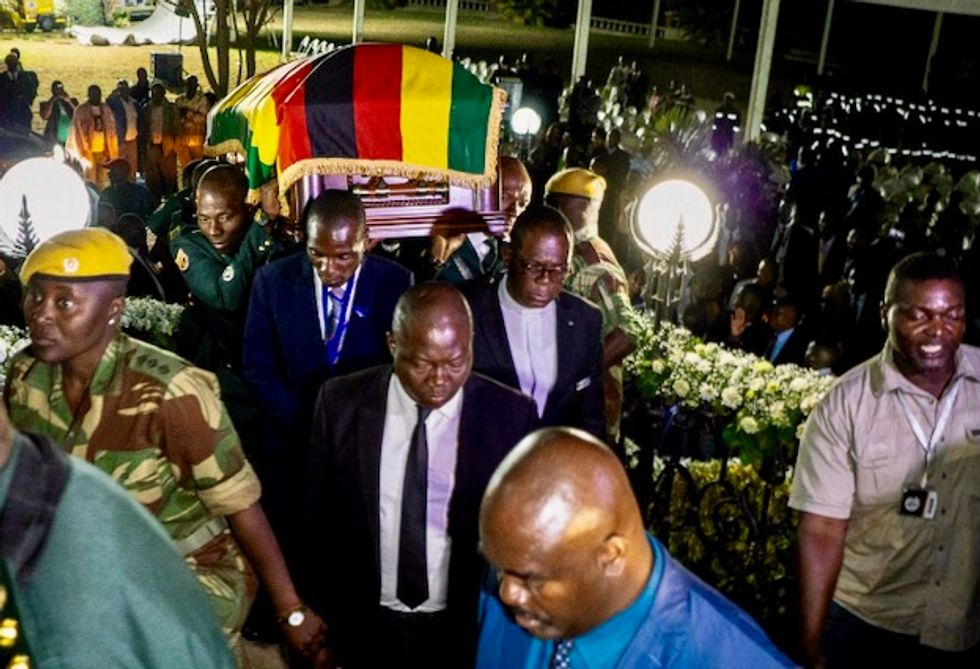 Zimbabwe ex-president Robert Mugabe's family and the government appeared to be deadlocked on Thursday over his final resting place after relatives snubbed a plan for him to be buried at a national monument.

Mugabe died in Singapore last week aged 95, leaving Zimbabweans divided over the legacy of a leader once lauded as a colonial-era liberation hero, but whose autocratic 37-year rule ended in a coup in 2017.

After Mugabe's death, his family and President Emmerson Mnangagwa appeared at odds over burying him at the National Heroes Acre in Harare or at a private ceremony likely in the family homestead of Kutama, northwest of the capital.

"His body will lie in state at Kutama on Sunday night... followed by a private burial -- either Monday or Tuesday -- no National Heroes Acre. That's the decision of the whole family," his nephew Leo Mugabe told AFP.

In a statement, the family accused Mnangagwa of trying to strongarm them into a public funeral against Mugabe's final wishes.

Some family members are still bitter over Mugabe's ouster and the role played by Mnangagwa, a long-time ally from their days as guerrilla fighters who eventually turned against him.

Mugabe fired Mnangagwa as first vice president in 2017 -- a move many perceived as an attempt to position his wife Grace to succeed him after nearly four decades of iron-fisted rule.

Soon after, Mugabe was toppled by protesters and the army in what was seen as part of a power struggle within the ruling ZANU-PF party between pro-Mnangagwa factions and Mugabe loyalists siding with his wife Grace.

Mnangagwa, who praised Mugabe as a national hero, sought to downplay any dispute on Thursday, saying he was still in talks with the deceased leader's wife.

"We said we will bury him on Sunday, but how? It will be decided," Mnangagwa said, addressing mourners at Mugabe's Blue Roof residence. "The family will have the final say."

Leo Mugabe said later there was no feud, claiming only that the funeral would be private for family members only.

"The obvious situation we are having here is there's only one Robert Mugabe," he told reporters. "They (the family) don't want you to know where he is going to be buried."

The former leader had been traveling to Singapore regularly for medical treatment, but his health deteriorated rapidly after his ouster, which allies say left him a "broken soul".

Mugabe's body arrived from Singapore on Wednesday at Harare airport, where Mnangagwa and Grace stood together as the former leader's remains were given an honour guard.

His body is expected be taken to Harare's Rufaro stadium on Thursday and Friday for a public ceremony.

Zimbabweans have been split over the death of a man once hailed for ending the former British colony Rhodesia of white-minority rule and bringing more access to health and education to the poor.

"The government should let him be buried at his rural home if that it is what he wanted," said taxi driver Desire Benhure, 28. "Otherwise he will become a ghost."

The 35,000-seat Rufaro stadium, where the public will be allowed to see the body, is where Mugabe took his oath of office when colonial Rhodesian Prime Minister Ian Smith handed over the reins of the country.

Mugabe hoisted the new Zimbabwe flag and lit the independence flame on April 18, 1980 -- bringing hope for a new era after a long insurgency.

But many Zimbabweans will remember his tyrannical leadership and economic mismanagement that forced millions to escape a country crippled by hyper-inflation and shortages of food, drugs and fuel.

Mugabe's legacy is marked by the mass killing of the minority Ndebele people in a military campaign in the early 1980s known as Gukurahundi, which took the lives of an estimated 20,000 alleged "dissidents".

His violent seizure of white-owned farms helped ravage the economy, sent foreign investors fleeing and turned Mugabe into an international pariah -- even if his status as a liberation hero still resonates in Africa.

Zimbabweans still struggle to survive, with a once-vaunted public health system now in shambles and the economy still in crisis.

Mnangagwa himself is under pressure after promising to attract investment and create jobs in a post-Mugabe era, with little success.

A massive fuel price hike this year sparked nationwide protests which led to a government crackdown on opposition and clashes in which at least 17 people were killed after soldiers opened fire.