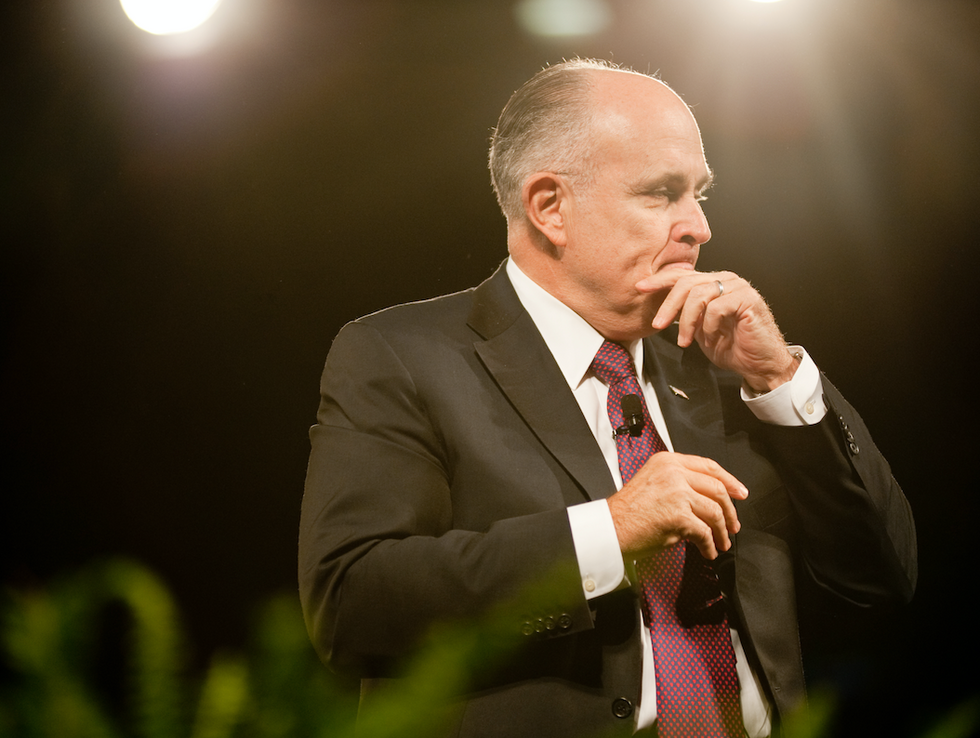 Two Russian businessmen made a six-figure contribution to a prominent pro-Trump political group during the summer of last year. The men also happened to serve as intermediaries between top Ukrainian officials and Trump's personal lawyer, Rudy Giuliani, the Daily Beast reports.

Since the funding source for the contribution remains a mystery, the Daily Beast looked into the real estate deals of the businessmen, identified as Lev Parnas and Igor Fruman. While the two worked to uncover alleged evidence of Biden-related corruption for Giuliani, they were also running a company called Global Energy Producers, which sought to capitalize on Trump's energy policies. Speaking to the Daily Beast, a Russian energy executive said the pair bragged about their connections to the Trump administration and the benefits that would come as a result.

The Daily Beast found that the pair's largest donation to the pro-Trump PAC, over $300,000, didn't come from Global Energy Producers; it came from a company called Aaron Investments I, LLC -- a discrepancy that prompted a watchdog group to accuse the businessmen of violating campaign finance laws. But thanks to financial disclosures from a lawsuit that was filed against Parnas by a disgruntled former business partner, it was revealed that two days before Aaron Investments made the donation to the pro-Trump PAC, Florida real estate attorney Russel Jacobs wired the company $1.2 million -- just 5 days after the real estate company, Seafront Properties, which also happens to be owned by Fruman's brother, reported a "major transaction" involving a Miami condominium.

From the Daily Beast:

The entity that had lent that money back in 2014 wasn’t a bank. It was a New Jersey company called Grelex LLC. That company is run by Alex Fleyschmakher, a man who just last week was indicted by federal prosecutors on a kickback conspiracy charge for his alleged role in a scheme to bribe doctors who steered patients to a pharmacy with which he was financially involved.

Public records indicate that Steven Fruman had been in business with Fleyschmakher for some time. Both men, as well as Grelex, are listed as principles on a New York liquor license application filed in 2014 for a Manhattan Italian joint called Mamo Restaurant.

Five days after paying off Grelex, on the same day that Aaron Investments received its cash infusion from Jacobs, Seafront reported taking out a new $3 million loan on the same condo. Once again, the money came not from a bank, but from three individual lenders. Just over a year later, Seafront paid off that mortgage in full. That transaction, like the repayment of the Grelex loan, listed a lawyer at Jacobs’ firm as the attorney of record.

Then, last month, Steven Fruman signed over legal control of the condo to his brother Igor. On the same day, Seafront sold the property for about $4.1 million to a Florida company called FVV23 LLC.

While the Daily Beast's report doesn't definitively connect the Russian businessmen to the latest Trump/Giuliani scandal, it does claim to give a "jarring insight into the global cast of characters seeking to work with Trump and capitalize off his presidency."

"The degree to which he and Parnas allegedly pitched GEP investors on their Trumpworld pull harkens back to the sort of political favoritism and corruption that pervades the former Soviet bloc, where connections to those in power are frequently a business’s most critical asset," the Daily Beast's Lachlan Markay writes.