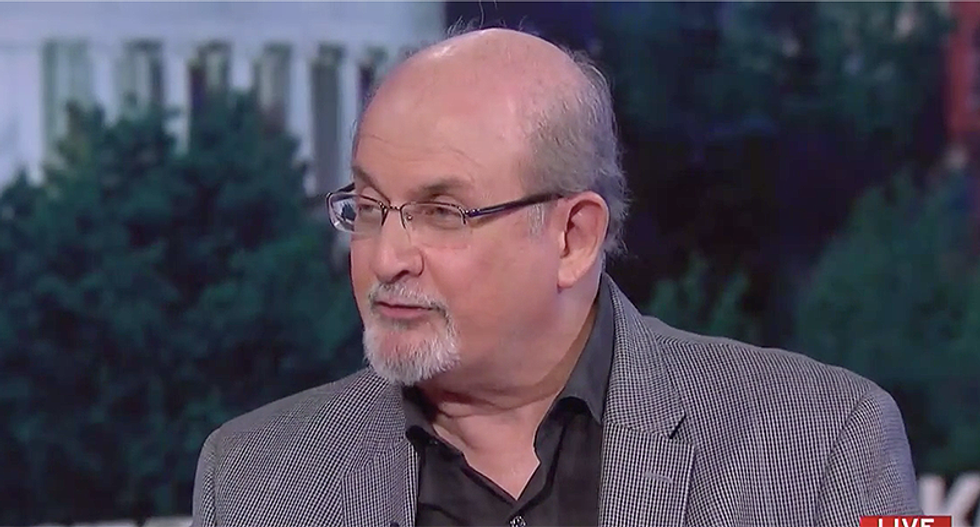 Author Salman Rushdie's new book explores the questioning of reality itself. Though he never mentions President Donald Trump's name, it may as well be a fictional description of struggling America.

"There were no rules anymore. And in the Age-of-Anything-Can-Happen, well, anything could happen. Old friends could become new enemies and traditional enemies could be your new besties or even lovers. It was no longer possible to predict the weather, or the likelihood of war, or the outcomes of elections," Ayman Mohyeldin read from Rushdie's Quichotte.

Rushdie said that the last thing he wanted was to give Trump the satisfaction of having his name immortalized in a book.

"But clearly we live in this world in which crazy things happen every day," Rushdie continued. "Which you have to report on. People want to bomb hurricanes with nuclear weapons. Things that defy, if you make up in a story would probably not be published because they’re so improbable. The improbable happens every day. It’s not only in America. What’s happening in Britain is as crazy as what’s happening here. In many ways what’s happening in India is very alarming as well. So, we do live in this age of anything can happen. When there seem to be no — the old rules seem to have broken down, we don’t know what the new rules are."

Mohyeldin noted that the book blurs the lines of reality.

"I think we do live in a time I think we live in a time in which those boundaries between fact and fiction have been very badly blurred. And it is very hard sometimes to tell what is fact and what is fiction. Just watching your show, what is fact one day is fake news the next day," Rushdie said in reference to Trump's flip-flop on meeting with Iran.

The panel joked about Trump tweeting an attack on Rushdie and the new book and how it would be, but Rushdie said he didn't view Trump as a big "reader."

AP reporter Jonathan Lemire wondered if Rushdie viewed this as the new reality.

"I don’t know. We might find more about that next year. At the moment I don’t know if this is an aberration or the new normal," Rushdie said. "My main character is anyway slightly off his head and confused about reality anyway, which gives me a comic way into the business of what is going on, you know, in the country as a whole. He becomes this sort of wanderer through America, not exactly all there himself. Experiencing, you know, the kind of crazy reality of the moment."