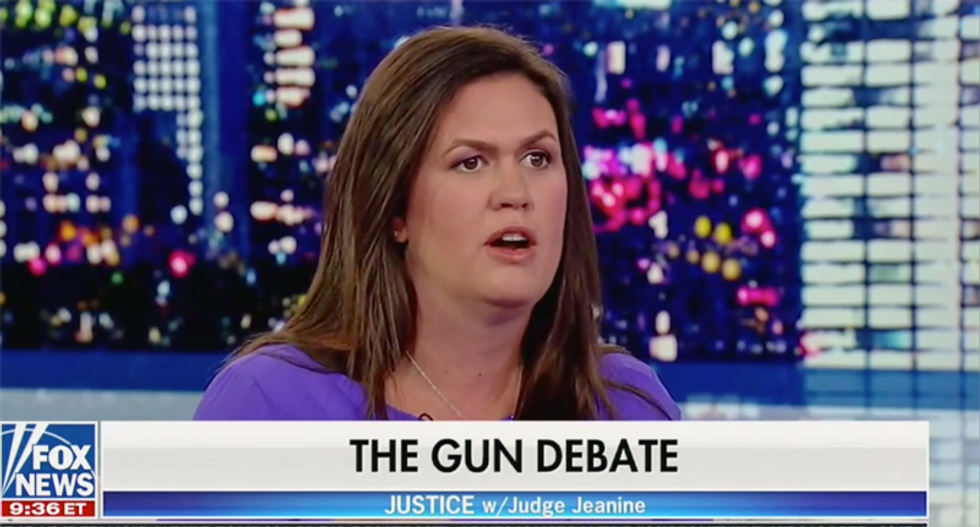 Former Donald Trump press secretary Sarah Huckabee Sanders wants the conversation about the epidemic of mass shootings in America to be "less about guns" -- and more about how people should not protest her for lying to the American people from the White House podium.

Sanders, who is considering running for Governor of Arkansas -- a position her father once held -- was interviewed Saturday by Jeanine Pirro on Fox News.

"You know, when Congress comes back, there’s going to be a lot of discussion about guns," Pirro noted.

"I think the big part of the problem that we're missing and one of the things we're not doing, is this is not as much a gun issue as it is a moral issue," Sanders claimed.

"We have to look for ways to bring this country together," said the former spokesperson for Trump.

"We have to look for ways that we can have discussions and disagree with people without being kicked out of restaurants, without fear of losing our job," she continued.

In 2018, Sanders was kicked out of the Red Hen restaurant in Lexington, Virginia after the employees of the establishment voted not to serve someone working for an administration separating children from their parents and locking the kids in cages.

"It all goes back to having respect for each other and I think we need to have a step back open not make this a gun issue, but this heart issue," Sanders urged.

"We’re a culture that no longer values life. You look at some of the things that are happening right now and how some of the Democrats, the comments they’ve made about the pro-life community, we are not valuing life. And when we do that, we put, I think, everybody in jeopardy," Sanders warned.

"I think we really have to take a look at how we have this conversation. Make it less about guns, more about respect and treating each other the way we would want to be treated," Sanders suggested.