'Saudi Arabia pays cash': Trump admits 'unlike other presidents' he'll be renting out US troops for military action 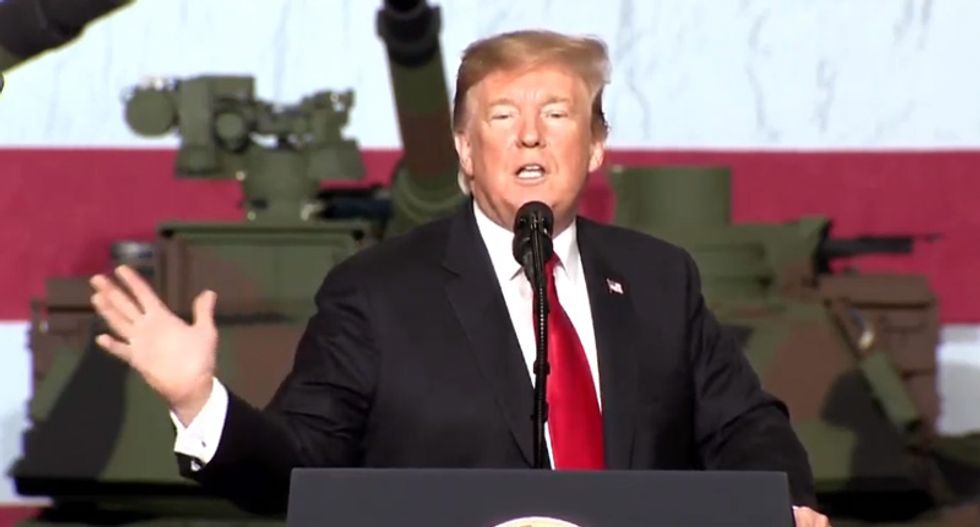 President Donald Trump has been banging the drums of war in recent days, pointing the finger at Iran for a massive drone attack on Saudi Arabia oil fields that caused the price of oil worldwide to spike.

But on Sunday, President Trump admitted – even bragged – that U.S military forces are “locked and loaded.”. Trump also made clear he would be more than happy to order a strike on whatever country the Saudis tell him to hit.

That’s not how the U.S. Military has ever been used. They are not soldiers of fortune, they are not mercenary forces.

We, Trump said, “are waiting to hear from the Kingdom [of Saudi Arabia] as to who they believe was the cause of this attack, and under what terms we would proceed!”

Those words stunned many, with some – like MSNBC’s Chris Hayes – effectively translating the realities of Trump’s remarks: That the allegedly murderous Saudi Prince known as “MBS” is their new leader.

On Monday, Trump continued his march toward war, stunningly – again – bragging that the U.S. military is for sale, or, at least, for rent, and the Saudis are his favorite customer.

“We would certainly help them,” Trump said, noting that “they’ve been a great ally, they spend $400 billion in our country over the last number of years. $400 billion, that’s a million-and-a-half jobs."

Moments earlier Trump admitted that if the U.S. engages in military action against the country of Saudi Arabia’s choosing, Saudi Arabia would “be very much involved in paying for that.”

“This is something that’s much different than other presidents would mention,” Trump said, repeatedly saying the Saudi’s “would be very much involved,” and “that includes payment.”

Trump is literally renting out the U.S. Armed Forces, and admitting it. No mention what happens if and when any U.S. service members die as a result of his freelancing out our troops.