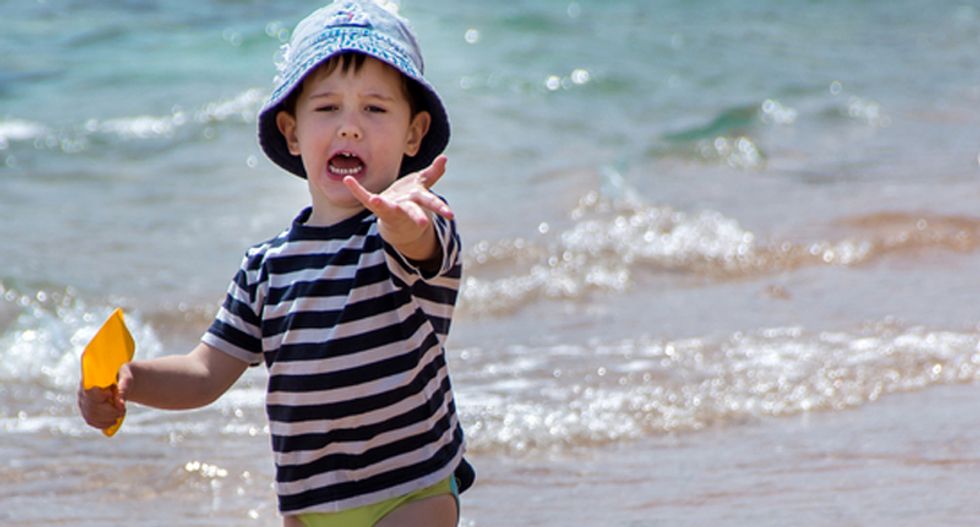 A sad little boy runs along the beach (Shutterstock)

Plastic by-products were found in an alarming 97-100% of blood and urine samples from 2,500 children tested between 2014 and 2017, according to a new study by the German Environment Ministry and the Robert Koch Institute.

Der Spiegel, the German weekly magazine, published the findings Saturday, which were part of a federal study focused on "human biomonitoring" of 3 to 17-year-olds. Traces from 11 out of 15 plastic ingredients were found in the test samples.

"Our study clearly shows that plastic ingredients, which are rising in production, are also showing up more and more in the body. It is really worrying that the youngest children are most affected as the most sensitive group," Marike Kolossa-Gehring, one of the study's authors, told the magazine.

Researchers said that they were especially concerned about high levels of perfluorooctanoic acid (PFOA) that were found in the study. PFOA is an extremely persistent, bioaccumulative, and toxic chemical frequently used in non-stick cookware and in waterproof clothing.

In 20 percent of those examined, they were above the limit, in the younger children, the proportion was even higher. The study also showed children from poorer families had more plastic residue in their bodies than children from higher-income families, according to German public broadcaster ARD

"It can not be that every fourth child between the ages of three and five is so heavily burdened with chemicals that long-term damage cannot be reliably ruled out," says Hoffmann. "The Federal Government must make every effort to protect people from harmful chemicals," says Hoffmann, "Provision is an obligation."

The chemical is dangerous for the reproductive system and is toxic to the liver. While a global ban of perfluorooctanoic acid is to take effect in 2020, a group of international NGOs has criticized the EU for requiring an exemption for medical textiles from a global ban on the use of perfluorooctanoic acid (PFOA) agreed at the UN Conference of the Parties (COPs) last May.

In a statement, NGOs, including the Health and Environment Alliance (HEAL), Health Care Without Harm (HCWH) and Arnika, expressed "deep regret and disapproval" for the request, which could "undermine an otherwise effective worldwide ban.

"Delegates from more than 180 countries agreed the prohibition of the use of the chemical, adding it to Annex III of the Stockholm Convention at the conference in Geneva. However, several exemptions for the substance, including one for medical textiles, were requested by the EU delegation – along with China and Iran – and approved

The new German research was made available by the government upon request by a Green Party inquiry into the effects of chemicals on public health.

Hoffmann said that there has not been enough research on how plastic chemicals affect the body, and how they are ingested.

The results of the study also show an increase in exposure to substitutes for previously banned chemicals. Hoffmann sees this as a critical signal: Substances that are classified as dangerous should not be replaced by similar chemicals with likewise questionable properties, she says. In addition, it must be better researched, which entry routes chemicals enter the human body, the Green politician told Der Spiegel. The results of the study include, for example, the exposure to substances contained in cosmetics, children's toys or medical devices.

Did you know 99% of Americans have a Teflon chemical in their blood❓ This chemical C8 has been found in newborn bab… https://t.co/l7L7jFFBTc
— Reiner Grißhammer (@Reiner Grißhammer)1564759480.0