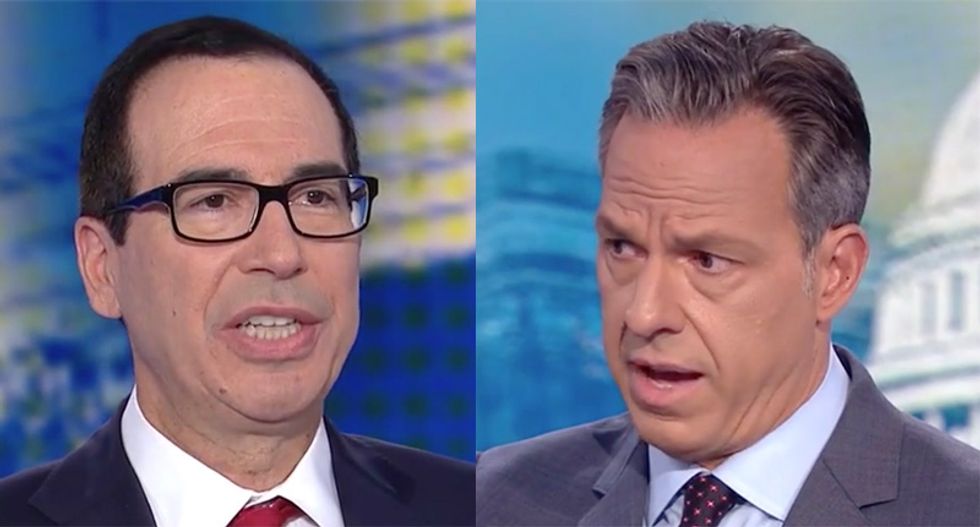 Mnuchin first dismissed reporting by the Washington Post and the conservative Wall Street Journal that Donald Trump was withholding Ukraine funding in an effort to get dirt on Biden and his son -- saying neither newspaper could be trusted -- he then complained to the CNN host about having to spend seven and a half minutes talking about Trump's Ukraine scandal.

With Tapper pressing him one whether he approved of Trump using aid as leverage to get opposition research on a possible opponent in the 2020 elections, Mnuchin instead attacked Biden's son.

"If President Trump brings up this desire of his to have the Ukrainians investigate the Bidens, and again the Ukrainian prosecutor said on the record and the Ukrainian foreign minister said there is nothing there and they did look into it and there is no evidence of wrongdoing, and if president brings it up will you say something and say 'I don't think that is appropriate'?" Tapper asked.

"My conversations between the president and I are confidential," Mnuchin shot back. "But let me just say, I find it interesting that we spent close to 7 1/2 minutes talking about a political issue and not talking about what is the real issue of the week which is Iran launched an attack-- launched an attack on Saudi Arabia and on the world economic system and it is a very significant issue."

'Well, I do want to talk about that," Tapper replied before pressing, "But let me just close by asking if, for instance, President Obama had pressured a foreign leader, Putin or the president of Ukraine, anyone, and said 'I want you to look into Donald Trump Jr. or Eric Trump, international businessmen, both of them,' would you not find that inappropriate?"

"I'm not going to speculate on that," Mnuchin tersely replied. "What I do find inappropriate is the fact that Vice President Biden's son did very significant business dealings in Ukraine. I, for one, find that to be concerning and to me that is the issue perhaps that should be further investigated."

'I don't understand," Tapper replied. "So it is okay for Donald Trump Jr. and Eric Trump to do business all over the world and okay for Ivanka Trump to have international copyrights while President Trump is president and, while Joe Biden was vice president, his son shouldn't be able to do business dealings?"

"Again, I don't want to go into more of the details other than to say I think there is a significant difference in what you're saying," Mnuchin demurred. "What I was saying was between Biden and his son's relationship with the Ukraine oligarch, and potential business dealings that the Trump Organization has had, which pre-dated his presidency."