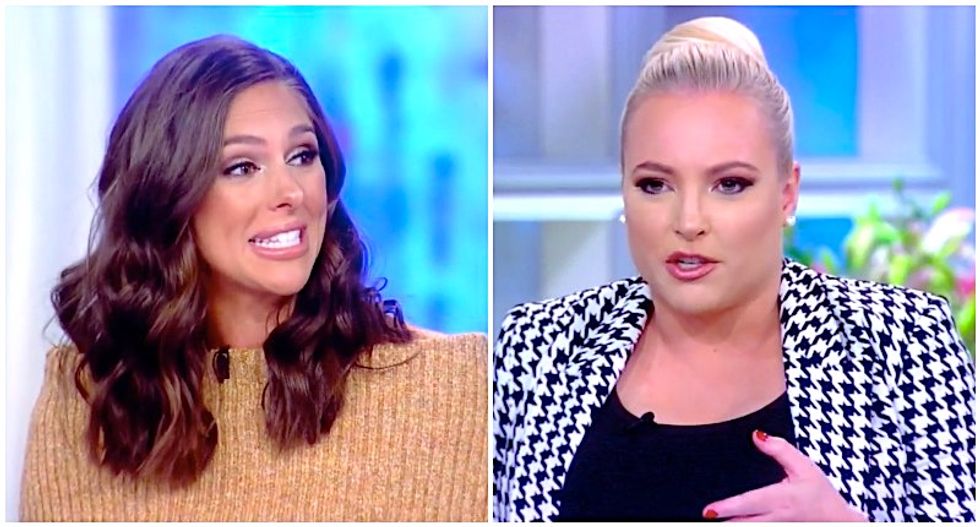 Both conservatives on "The View" warned of the dangers of democratic socialism, but co-host Joy Behar drew a rowdy response with her impassioned defense of wealth distribution.

The panelists were discussing Sen. Elizabeth Warren's climb in the polls, and Meghan McCain speculated about the possibility of the Massachusetts Democrat heading into a contested Democratic convention with Joe Biden and Sen. Bernie Sanders.

"I happen to love Elizabeth Warren," Behar said. "I think she would make a magnificent president, and I think this whole talk about she's too far to the left is a lot of hooey, frankly."

"I am the poster child for what they call democratic socialist," she continued. "Unemployment insurance saved me many times, I've been fired several times. Social Security, Medicare, I have them both now, thank you very much. I went to college for free, I have a master's degree that they paid for. Now, that's what democratic socialism is. It's not that the government is going to own all of the industries. Yeah, like that's going to happen in my lifetime, anybody's lifetime -- Jeff Bezos is going to give over Amazon to the government."

"That is the crazy socialism," Behar added. "She's talking about helping people, whereas Donald Trump wants to rip every safety net out of everybody's hands and bring everybody to bankruptcy, so there is a major choice here. Think about it when you vote."

Huntsman said that choice is "scary" to many Americans, who are wary of government intervention, but co-host Sunny Hostin said polls show many progressive policies are actually popular.

"The majority of Americans, when they are polled, they want free public college tuition, they want raising minimum wage, they want immigration reform, they want some sort of gun reform, and they want to reduce wage and income inequality," Hostin said. "So I don't think that those are progressive beliefs."

Huntsman admitted she liked the sound of that, but she had concerns.

"I would love all those things too," she said. "I would love free education, free health care -- but ultimately you got to pay for those programs."

The audience at first laughed, and then loud cheers broke out.

McCain argued that Warren was not able to outline plans in the last debate to pay for some of her policies, but she didn't offer specifics.

"I'm going to get to policies in a second," McCain said. "I want to do fast and loose with both of you. Bernie or Warren? Make a choice quick."