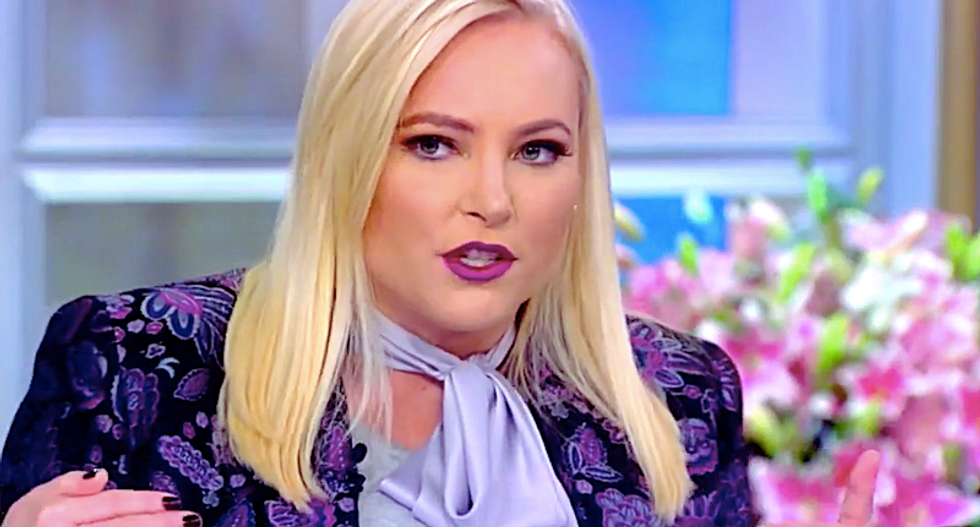 Meghan McCain managed to place herself at the center of a debate about a whistleblower complaint filed against President Donald Trump.

"The View" grappled with reports that Trump dangled U.S. military aid to Ukraine in exchange for damaging information against Joe Biden, and co-host Abby Huntsman agreed that was an impeachable offense -- but expressed doubts about the accuracy.

"This is a blown-up story and we have no facts, there's no gray area," Huntsman said. "It's black and white, and that would give Trump all the more ammunition if this isn't even true to say, this is what the media does."

McCain agreed, and then changed the subject to criticism she faced from the left over her contentious interview with actress Pamela Anderson two weeks ago.

"Abby and I were struggling with the same thing," she said. "This is what I know. We had Pamela Anderson on a week or two weeks ago, and I took her to task about Julian Assange. There are a lot of liberals okay with him, those same people are screaming bloody murder right now about this whistleblower."

"I think all interference from a foreign country in our election, all of it is bad and should be condemned, and you can't play party politics with this, and there's a lot of people on the left who are doing that with Julian Assange," McCain added.

The other panelists seemed confused by the topic change, and host Joy Behar asked her to clarify.

"Excuse me, I'm still speaking," McCain fired back. "I'm mad that there are people on the left that think that Julian Assange is okay, that he's some kind of patriot whistleblower when he did interfere in our election. "

That didn't clarify things for Behar.

McCain complained that she had been subjected to criticism from Bernie Sanders supporters who approved of WikiLeaks dumping hacked emails online to hurt Hillary Clinton's election chances.

"I was taken to task by many Bernie supporters who think it's okay, and people who have difference of opinions," McCain said. "I believe you, in particular, and I don't want the speak for you, but I know you and I diverge on that issue, and it has to be condemned all the way around, and I get frustrated when I do that because I think all interference from foreign adversaries in our country is dangerous and should be illegal."

"There's a lot of people on the left that are okay with Julian Assange," she added, but aren't okay with this whistleblower."