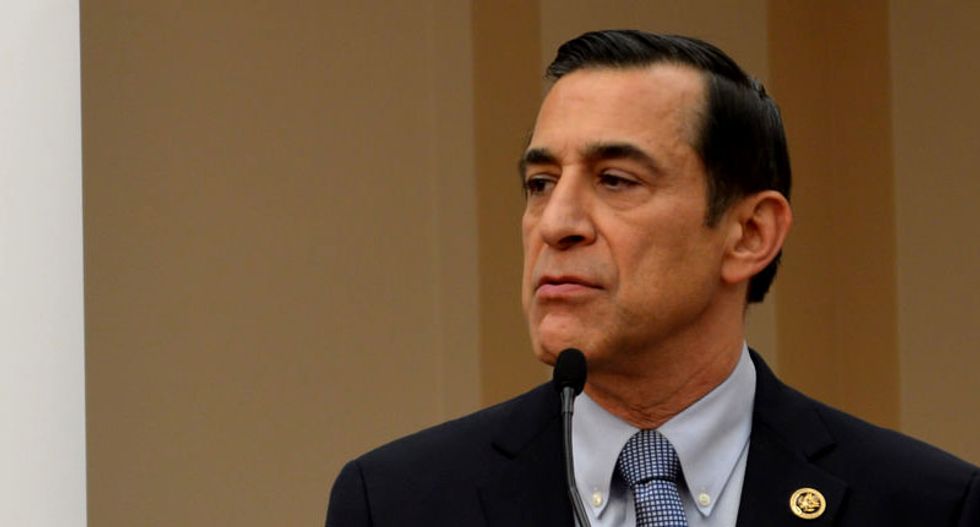 Former Rep. Darrell Issa (R-CA) was once the a member of the House Intelligence Committee, but as of Thursday, he's no longer being considered for a position in President Donald Trump's administration. According to Roll Call, Issa couldn't pass the background check.

Issa was slated to appear before a Senate confirmation hearing Thursday, but the White House refused to release the findings of the background checks for Issa. As a result, Senate Foreign Relations Chair Jim Risch (R-ID) agreed to "indefinitely delay former Rep. Darrell Issa's confirmation hearing to lead the Trade and Development Agency."

Only Risch and Sen. Bob Menedez (D-NJ), the committee's ranking member, were given the information on the background check. The two men had a public back-and-forth with the over the findings, revealing the former Congressman had "problematic classified information contained" in his background check.

Presumably, Issa had a clearance level that required a background check as a member of the Foreign Affairs Committee and the permanent Select on Intelligence. It's unclear if that means the background check problems were from recent events or they were not discovered in past background checks.

Another hearing for an individual with background check holes was continued despite protests from Menendez.

"Risch joined Menendez in sending a letter to the White House asking for it to release the FBI background investigation into Issa, who in his past role as head of the House Oversight Committee was a relentless interrogator of Obama administration officials. But their joint letter received no response, according to Menendez," wrote Roll Call.

"The White House has simply ignored the joint request of the chairman and the ranking member of this committee for additional information on an executive branch nominee," Risch said.

Menendez sought to close the hearing to have a specific conversation about Issa's background check problems, but Risch objected, forcing the members to vote on the closed-door discussion. The motion failed after an 11-11 tie.

Risch then said he would welcome a discussion on Issa's background check and wouldn't schedule another hearing vote until all members have read the background documents.

Trump nominated Issa nearly a year ago, but in August, Issa started an exploratory committee for another shot at a Congressional seat.

An Arizona protest demanding a redo of this month's election erupted in acrimony after a man showed up carrying a large Confederate flag.

Protesters outside the state Capitol called for a new election because, they baselessly claimed, the Nov. 8 losses by Republican gubernatorial candidate Kari Lake and Senate candidate Blake Masters were marred by fraud.

Boebert's near loss is a red flag for GOP candidates about using the Trump playbook: conservative

In a column for the Washington Post, longtime National Review writer Jim Geraghty used Rep. Lauren Boebert's (R-CO) near-loss of her seat in the midterm election as a cautionary tale to warn fellow Republican candidates that the politics of perpetual outrage and attention-seeking stunts did not play well with independent voters -- as well as some Republicans.

With the controversial Colorado lawmaker hanging onto her seat by less than 600 votes out of over 320,000 cast in a Republican-leaning district, the conservative columnist pointed out that her opponent Adam Frisch "wildly overperformed expectations by asking voters whether they were tired of Boebert’s brand of 'angertainment,'" before adding that Frisch is on to something.

Even some of former President Donald Trump's most loyal media allies are giving him grief for his meeting with Holocaust denier Nick Fuentes.

Breitbart News, which in 2016 was one of the most pro-Trump news outlets in the right-wing media ecosystem, has published a story that looks critically at Trump's decision to host Fuentes at his Mar-a-Lago resort.